The "Wicket Gate" stretch at the top end of the Crosby beat on the River Eden in the far distance.
Malcolm Dutchman-Smith

We all face difficult choices in life, some of which have to be made in the heat and stress of the moment, but this was not one that I had remotely expected to face.

The trip was intended to be a happy return to the attractive Crosby Beat on the River Eden in Cumbria which I had had the good fortune to fish regularly during the 1980s and 1990s. The added bonus was that I had persuaded my brother John to accompany me. Although he no longer fished, in those far-off days he had done so and accompanied me on Crosby with some success. It was intended primarily as a bit of fun and sibling bonding, but such was his naivety that notwithstanding that he was just about to enter his “three score years and ten” and had not visited the beat for more than 20 years nor fished at all for about 11 years, he confidently expected things to be exactly the same as they were both in terms of the beat, the number of fish around to be caught using, of course, exactly the same tackle and tactics he had used when he was last there. My gentle and tactful efforts to bring him back into reality were to no avail.

Thus it was at about 9am on the first of our two days on the beat (which was very low having had no appreciable rain for some weeks) whilst I tackled up my modern carbon fibre fly rod with a floating Spey line, tapered leader and a small plastic tube, he proceeded, as he had frequently done in the past, to fish “Barn End” with his stiff fibreglass spinning rod with a 2 inch black and gold Devon attached to the end of the line. It would have been his customary three-inch black and gold Devon if he had had his way but showing an element of compromise with my opinions he did reduce the size somewhat.

Even though fish were showing occasionally in the pools it was not a happy experience for him, although the main reason was not one that either of us had anticipated. Whilst he had strode purposefully down to the river in his old heavy duty chest waders, he had got no further than at most a couple of feet from the bank before he realised that he had lost his confidence to wade and would go no further despite my encouragement as he needed to put his bait over to the far side of the river where most of the lies were. His old fixed spool reel was loaded with some monofilament that he had purchased from a tackle shop that dealt exclusively in coarse fishing gear and it proceeded to produce “bird’s nests” every dozen or so casts. Needless to say, even the casts that went out did not reach beyond halfway across the river. He connected numerous times, but not with fish, losing a number of spinners on the bottom.

After lunch I tried to persuade him to fish the fly but he can be stubborn and although he has caught a number of salmon on the fly (including a magnificent 23 ½ pounds springer on the River Thurso), he bluntly told me that all the fish he had caught on Crosby had been on Devon minnows and he was sure that if he persevered he would succeed again.

Ultimately he did put on one of the infamous “Flying C’s” remembering that he had once caught a salmon on the Tweed using such a lure. A memory that had stuck in his mind as that day I had only fished the fly and caught nothing.

I put him upstream in the middle of Crosby Pool and I fished a small cone-head ”stoats tail” at the run in of the pool at the “Wicket Gate”, where there was a reasonable flow at least for the first 30 yards or so. I had virtually fished out this flow when there was a boil above where my fly was swimming followed by quite a savage pull and I was into what was a fish of some substance which proceeded to give good account of itself taking me down to the backing a couple of times. Not unnaturally John decided to come up intending to watch the fun and net the fish. He was standing only 2 feet into the river and could quite easily have walked up to where I was playing the fish. However such was his reluctance to wade that he got out of the river and proceeded to walk up the track on the bank which at the point where I was playing the fish was tree-lined with thick vegetation. However, to assist anglers carefully prepared pathways had been cut through at regular intervals to permit access and there was one about 10 yards upstream which helpfully had steps down the steeper parts of the bank.

This would have been ideal for him but unfortunately John had tunnel vision and having reached the spot where I was, immediately turned back to the river and fought his way through trees, bushes and vegetation to lower himself down into the river, but more particularly into thick yielding silt and mud which swallowed his waders up to the knees. In his struggles to extract himself, he fell over but was prevented from sinking by the gye net helpfully strung across his back. He immediately shouted to me explaining his predicament and his inability to move at all. He wanted and needed assistance. Quite reasonably I thought, I pointed out to him that as I was playing a fish it was rather difficult for me to respond immediately and very nobly he urged me to land the fish before undertaking rescue operations. This was accomplished some minutes later by beaching what was a 15 pound coloured cock fish. Obviously it had to go back and I explained this to my prostrate brother (who I could not see covered as he was by mud, tree branches and vegetation) but who shouted a rather sarcastic and inaccurate comment about me not being that fussy in the past!

Unhooking the fish was easily achieved and, at his request, I carefully held it in a position in which he said he was able to see it before speedily returning it to the water.
The fish had fought hard and was exhausted. I had to hold it in the current for a considerable period of time whilst it recovered. I did this to a background of protests from my brother as to my lack of urgency in assisting him saying that he knew that I did not hold him in high regard but he did think that I placed him above the interests of the stale old cock fish. I responded soothingly with an account of the progress or lack of progress I was making with regard to revival of the fish and this at least stirred him into efforts of self-preservation and he recounted the efforts that he was making to extract himself. Such was the progress that he seemed to be making that I concluded that the interests of the fish were paramount and, rightly or wrongly, I left him to it. The fact that I would have had to enter the mud bath and wrestle with a 16 stone man was not a factor that influenced me at all, but I was pleased that when I had reached the stage that the fish could hold its position in the current with its gills working well and I could turn round to consider my brother’s position, I could see what appeared to be a very large lump of mud crawling up the bank to the track leaving a trail of detritus of all kinds behind it. I was mightily relieved – my brother was safe!

Ever helpful I directed him to the pathway he should have used down to me and when he appeared, more exhausted than the fish, and certainly in a worse state, I pointed out to him that, very courteously, the fish had awaited his arrival and was still in exactly the same position in which I had left it. His inhibitions about wading seemed to desert him and he splashed his way out to where the fish was clearly visible stating in terms which cannot be repeated in this article what he intended to do with the fish and a certain part of my anatomy. Perhaps salmon are more intelligent than we give them credit for as showing commendable speed the salmon immediately departed back to the far bank of the river.

Mercifully, nobody appeared whilst he stripped to clean himself. Of course I helped although it would have been embarrassing to have to explain to anyone why, instead of fishing, I was rubbing down the back of a naked elderly gentleman.

Our opinions differ but I am convinced that I did what was right in the circumstances. It was a good day for me, unfortunately only a memorable one for my brother. We are still on speaking terms but have agreed that although I may visit the beat again he will not be doing so. 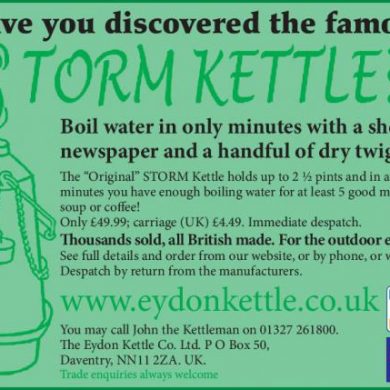