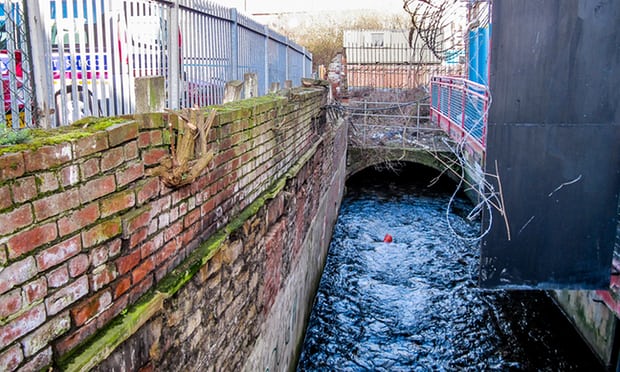 The Porter Brook before it was recovered. Photograph: Paul Gaskell
Editor

A river runs through it: the global movement to ‘daylight’ urban waterways

Tucked away in a corner of Sheffield’s cultural quarter, among the graffiti and red-brick housing blocks and a derelict industrial site, lies a green oasis. Porter Brook is a “pocket park” – a small amphitheatre, sloping down to the banks of the river Porter, where wild trout spawn in spring and students from the technical college picnic and paddle.

Two years ago, the pocket park did not exist. There was just a crumbling car park with the river Porter nowhere to be seen, save for a brief glimpse before it disappeared into a culvert.

“There’s no green spaces at all in this part of Sheffield, so the pocket park has been a great success,” says Katie Bayliss, a local resident. “Before, I don’t think people realised there was a fully flowing river here. You could see a bit of water going into a tunnel, but it looked more like a drain.”

Like many UK cities, Sheffield is built around a network of rivers that first attracted settlers about half a millennium ago. Its very name is derived from the old English Scafeld, meaning “a clearing by the river Sheaf”, and the city’s topography – the valley and the rolling hills of the surrounding Peak District – has been carved out by water over thousands of years.

Not that you would know it now; Sheffield may lie at the intersection of two rivers but its watery roots are largely invisible. The Porter, Sheaf and Don rivers spend most of their urban life underground…

Start typing to see results or hit ESC to close
salmon fly fishing conservation Chris de Cani River Test
See all results
More Stories
Sea Lice Mutation – A Cause for Concern?
This website uses cookies to improve your experience. We'll assume you're ok with this, but you can opt-out if you wish.Accept Reject Read More
Cookies Policy