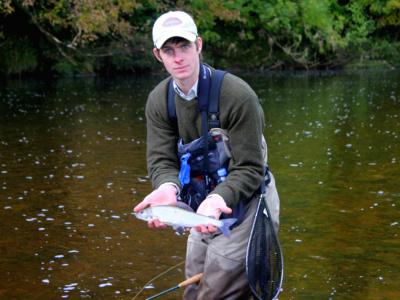 Fishing on the Frontier – Part 47: The Bridge

“What an extraordinary year with a fly rod it has been! While much of the autumn has been spoiled because of the flooded rivers, when we have had a window in the weather the fishing has been magnificent.” Jeremy Lucas continues his Fishing on the Frontier series.

On Eden the hatches of BWO, and pale watery species, persisted and though not exactly blizzards they were respectable enough to bring both trout and grayling to the surface.  That being said, it has been a ‘nymphy’ period on this river, and several others I have fished.  While I have been hunting down rising fish with plume tips, friends have mostly fished with nymph.  Tom Speak, for example, who is an outstanding example of the new generation of river anglers, has perfected his approach with nymph on leader-only rigs and I find it very difficult to find fault in his technique.  It is quite humbling, actually, to see the general standard among young anglers on our rivers, at such a higher level than that of even a decade ago.

Gone are the short, over-powered rods, such as the tippy American-influenced rods of that period.  Nowadays, we see two and three weights dominating the scene, and there are excellent examples of these in the 9′ 6” to 11′ range from Marryatt, Greys (including the ‘cult status’ 10′ two weight Streamflex XF2), Hends and Hanak, among others, which all are capable with the very light approach that has so radically changed the river sport.  This has been in parallel with the uptake of the fixed-line (tenkara) which also gives us unprecedented control and contact at short range.  Lines have almost kept pace, with much improved polymer lines from the likes of Rio (the LT range, particularly the incredible triple zero, which is the equivalent of an AFTMA 0 weight), Scientific Anglers and Hardy (the excellent Premium, for example).  The silk line has made something of a come-back, thanks largely to the beautiful lines produced by Phoenix in France, with the lighter examples such as the AA level offering great adaptability by being adjustable for floating, intermediate of slow sinking presentation, all with zero stretch in a very thin profile.

And finally, of course, we have discovered the enormous benefits of fishing with leader-only, having at last escaped from the entrapment or limitations of the French leader, which while excellent for nymph presentation, is not suitable for dry fly beyond very short range.  The contemporary leader-to-hand approach uses a leader that has been designed for the purpose of both nymph and dry fly, and for the casting of these (particularly dry fly) out to very long range on the river (in excess of 15 metres), with control at this range, which neither fly line nor French leader can give to the same extent.  The caveat here is that this is indeed very long range on the river; even though we have the capability for presentation and control out to this range, it is  almost invariably far better to come down to sub-10 metres.

Two years ago, when I started to broadcast about leader-only, I was seen as something of a maverick; though now it is so satisfying to see the uptake, which in Britain even exceeds that of tenkara.  An increasing number of river anglers have found the presentation benefits of the leader and never want to go back to erstwhile limitations.  My own ‘presentation leader’, discussed here previously, had been developed to such a point that I really could not see any way in which it could be improved.  The long, level section of 0.47mm copolymer along with the short, steep taper from 0.55mm to 0.25mm copolymer, to a short, braided nylon monofilament section, in the dimensions that had been developed for optimum casting and control, proved to give excellent performance on a range of European rivers (as well as small lakes).

Early last spring, however, I was fishing with tenkara a lot, with both nymph and dry fly, and experimenting with appropriate leaders, which included a shorter version of that above, at 3.5m, as well as single-filament, and furled or braided thread, nylon, and fluorocarbon tapers.  Tenkara has been a little ahead of western-style with the taper concept, in particular by pushing the mass along the leader (like a weight forward fly line), which is exactly where it is needed for casting purposes.  I built this in to my presentation leader very early on, mostly in the form of the nylon braid section which, when greased, has significant mass.  This was probably the single-most important development from the French leader which did not utilise such mass distribution, mainly because the anglers of the time were relying on the nymphs to give sufficient casting mass, rather than the leader.

Dry fly potential was an afterthought, but it was this that drove me, because the limited casting use of the French leader with dry fly was a frustration.  While happy with the performance of the presentation leader, I have been looking for ways of improving it, and tenkara has certainly helped in terms of a broader consideration of possible materials to be used in the construction.  The use of horse hair in leaders is hugely under-rated.  This natural material is comparatively stiff while being comparably strong, and dense, for its diameter.  Having made and experienced tapered, furled horse hair leaders with fixed line, the resultant benefits (high casting mass and stiffness) were obvious and the potential in the presentation leader became alluring.  I now replace the 9 inch nylon braid section (itself having significant mass) with a slightly longer horse hair furl, of 12 or 14 strands, looped at each end, as in the original nylon braid.   Even more mass can be built in by replacing the copolymer tapered section with a tapered furl of horse hair, of about two metres in length.

Horse hair takes Mucilin grease at least as well as nylon braid, and this further increases its mass, which is positioned perfectly for long range casting and control.  It is the material’s stiffness, however, which yields its greatest benefit, because the turn-over, even at the 15 metre range is significantly improved over the more limp tapers of synthetic materials (or thread).  I now ‘tip’ fly lines, including silk, with level furls of three strand horse hair, of up to a metre, for a delightfully progressive turn-over (simply improved translational energy to the tippet).

We have read so much of the ‘contest’ between the tenkara minimalists and the western-style devotees; but I think this is all too shallow and subjective.  I see the two approaches as converging at a bridge.  Without a doubt, both approaches have so many great strengths, though they both have weaknesses (some of which have not been documented, if even observed).  We benefit far more by taking the best each school has to offer, or bypassing the weakness of each, and incorporating these into a unified approach, at the core of which is presentation.

I admit to a further liking of the use of horse hair, and that is its ‘retro’ nature.  It is immensely satisfying to find improved presentation characteristics – from the casting to turn-over and consequent control through the drift – in a natural material hardly incorporated within our sport for 50 years.  It is all part of the bridge, or union, between fixed and running line styles which will inevitably further converge.

Start typing to see results or hit ESC to close
salmon fly fishing chub roach pike
See all results
More Stories
Sea Lice ‘Out of Control’ in Many Scottish Regions
This website uses cookies to improve your experience. We'll assume you're ok with this, but you can opt-out if you wish.Accept Reject Read More
Cookies Policy