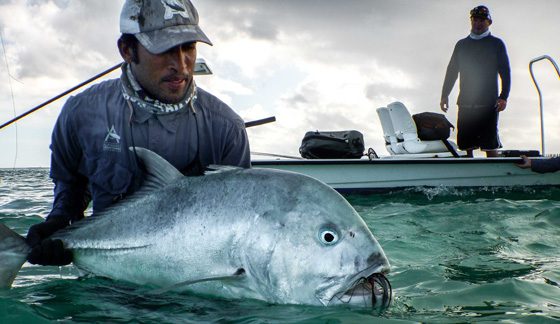 After last week’s tropical cyclone the team was concerned what effect it would have on the fishery. As it turned out, and to everyone’s relief, the impacts were very positive.

The strong winds of the previous week caused a mixing of surface water layers and thus a reduction in water temperature, which the fish were very happy about. This led to some really great fish being caught and there were many stories of ‘the ones that got away’ as well as the ones that didn’t. The GTs made themselves known and the triggers were ever happy, two guests found gold and some incredible bonefish fishing was had by all.

Richard Maree, brand new to fly fishing, got stuck straight into a good 80cm GT on white sand on the first day. Jim Klug, finished off his week with a good moustache triggerfish, a gorgeous yellow-margin and a solid 70cm GT; the yellow-margin making a final day ‘Flats Slam’. His boat partner, Tom Bie was not to be outdone and landed a 100cm GT, along with another of 85 cm, two moustache triggerfish and a yellow-margin. Another man to join our 100cm GT club was Jake Ellington as he managed a brute 106cm fish whilst popping in the lagoon.

Some days are just remarkable no matter which way you look at them. Andrew Schonbek and his niece Stef Beer had one of these days. Each of them managed two moustache triggerfish, Andrew capped his ‘Flats slam’ off with a 75cm GT on the walk back from the surf, and Stef managed a GT of 100cm prospecting over some submerged coral. Two ‘Flats Slams’ on their own is amazing, but the day had already started with Stef landing her first indo-pacific permit! Andrew went on to get a few more triggerfish and another GT.

Larry Pierce had one thing on his mind all week – and that was catching bonefish, which he proceeded to do with aplomb. Larry finished his week with approximately 300 bones and when he stopped catching those he landed one of the biggest permit of the season and a good moustache triggerfish.

The guys also spent some time on the bluewater boats looking to get a sailfish on fly with Charl Schwartzel and Richard Sterne both managing to complete a ‘Bills and Bones Slam’ on the same day.

Tight lines from Keith and the Alphonse Fishing Co. team.