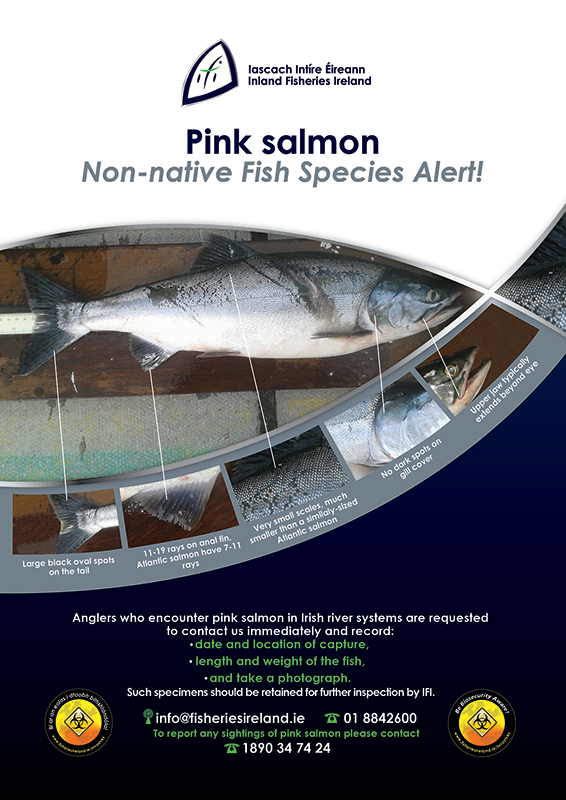 Further to the reports from Scotland of Pink salmon occasionally turning up in catches this year, it seems Ireland is also experiencing the same as this press release from Inland Fisheries Ireland demonstrates. Ed.

There have been several reports of non-native Pink Salmon in Galway, Mayo and Donegal rivers according to Inland Fisheries Ireland. The Pink Salmon species, which is of Pacific origin from the west coasts of the United States and Canada as well as Northern Asia, has been reported on several occasions during the past two weeks. The appearance of the species is of concern to Inland Fisheries Ireland as it may impact Ireland’s own Atlantic salmon species.

Pink or humpback salmon are a migratory species of salmon, native to river systems in the northern Pacific Ocean and adjacent regions of the Bering Sea and Arctic Ocean.  Outside of its native range, the species has established self-sustaining populations in rivers in northern Norway and in the far northwest of Russia.  These populations are believed to have originated from stocking programmes undertaken in this part of Russia in the second half of the 20th century. In Ireland, there is no license to farm pink salmon.

Inland Fisheries Ireland is appealing to the public to be vigilant and to report catches of Pink Salmon with a view to helping to establish the abundance and extent of distribution of the species in Irish waters. The species has a number of unique characteristics which are different to Atlantic Salmon. Pink salmon can be distinguished by the following:

Dr Greg Forde, Head of Operations at Inland Fisheries Ireland said: “The appearance of pink salmon in the West of Ireland is currently a mystery to us. It seems unlikely that these fish made a migration due to their small size. We are appealing to the public, and the angling community in particular, to be vigilant and to report any catch of Pink Salmon to Inland Fisheries Ireland so that we can undertake examination of size, maturity stage and genetic origin. The concern is that when angling, anglers are only exploiting about 15% of the salmon stock so there are likely to be several more of these fish in rivers.”

How you can help 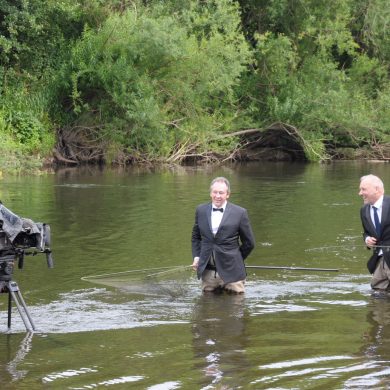 Gone Fishing photo caption competition, judged by Paul Whitehouse and Bob Mortimer!
This website uses cookies to improve your experience. We'll assume you're ok with this, but you can opt-out if you wish.Accept Reject Read More
Cookies Policy