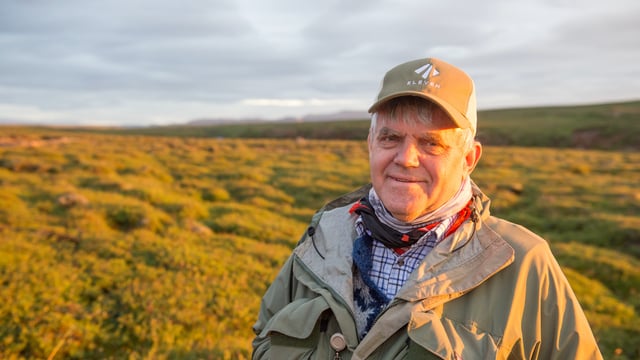 Honouring the Legacy of Orri Vigfússon

Following the recent passing of Orri Vigfússon, Founder and Chairman of the North Atlantic Salmon Fund, the Grassy Creek Foundation (a U.S. charitable foundation committed to, among other initiatives, protection of our rivers and oceans and a major NASF donor) has shared with us all a video piece they created with Orri last year, originally intended to launch an NASF fundraising campaign for the mixed stock fisheries with him this autumn. It says it all. Orri was a real hero. This is a summary of their associated email accompanying the video below…

Orri was laid to rest in Reykjavík last week on what would have been his 75th birthday.  It was a rare Icelandic blue-sky day, with flags in the capital at half-mast, three former Icelandic presidents in attendance and hundreds of Orri’s friends packed into the iconic Hallgrímskirkja church, which was bathed in brilliant light and beautiful music.

He was a politician for one fish, a man obsessed with saving the Atlantic salmon.  Orri took no salary, had no overhead, and single-mindedly spent the last 27 years campaigning to save the salmo salar, the species he crowned the King of Fish.

Orri was first and foremost an angler who was happiest when on the river.  The joy he experienced when catching a salmon was exceeded only by the joy he had when one of his friends did the same.  We are all indebted to him not only for his selfless spirit but also for his high level of efficiency and effectiveness.  Orri’s success with pioneering environmental capitalism earned him the prestigious Goldman Environmental Prize and universal recognition from the global conservation community.  Everyone knows of Orri and his impact on the Atlantic salmon.  He is without doubt one of the greatest environmental heroes of all time.

Last summer, Orri asked us to carry on his quest to create the fund that he never had.  NASF ironically had no permanent funding, no endowment, no capital.  Orri had to raise money constantly, doing so on the banks of rivers 90 days a year, in endless dinners, and in boardrooms around the world.  He never had all the capital he needed to close the very important deals he was negotiating and even took out personal loans to fill the gaps.  He kept operations very tight to his chest and, with no staff or infrastructure to support him, he did not create an organization built for succession.  What became clear is that there is not now, and never will be, a replacement for Orri Vigfússon.

Orri’s last wish and his final priority for NASF was to see a permanent endowment created to fund the mixed stock fishery quota agreements in the Faroe Islands and Greenland. Orri believed these agreements are the most important levers to protect the greatest number of salmon, as they directly impact the migratory patterns of fish from over 2,000 rivers in all nations touching the North Atlantic salmon.  They address a massive and shared problem across the salmon conservation initiative.  These agreements protect the only true common habitat of the salmo salar.

Orri’s vision of the quota-based buyout system with the Faroese, signed in 1991 and maintained ever since, has been viewed as one of the most successful conservation and economic development transactions in history.  His final wish was to create a discrete fund that would provide capital to manage this treaty with both the Faroese and Greenlandic fishery management programs, as well as others that may require attention over time.

The Grassy Creek Foundation has been working with the North Atlantic Salmon Fund US and others to set up tax-efficient donor vehicles in the US and the UK to raise capital for the Orri Vigfússon Legacy Fund, or ‘the Orri Fund’.  These funds are being established with the explicit goal of creating an endowment to finance NASF’s mixed stock quota agreements, assuming acceptable terms will continue to be negotiated with all parties.

We are now finalizing the details of the Orri Fund and will be reaching out to you again shortly with more information. In the interim, we welcome pledges of support in Orri’s memory.  Please send us an email at orrifund@grassycreekfoundation.org with any financial pledge you can make and any stories or thoughts about your experiences with Orri.  We would love to hear from you all.  We will follow up with all pledges once the Orri Fund donor vehicles are properly established.

One of the extraordinary realizations from this week’s funeral service was that Orri touched so very many amazing people and organizations, but they had never before been convened in one place.  Sadly, his funeral was the time and place that many of us connected for the first time.  We should take this opportunity to determine how we can work together in the future to carry on Orri’s goal of restoring Atlantic salmon populations to abundance across their historical range.

We cannot replace Orri but we can help carry on his quest to save the Atlantic salmon.  Please help fund Orri’s vision.  Thank you for your consideration.