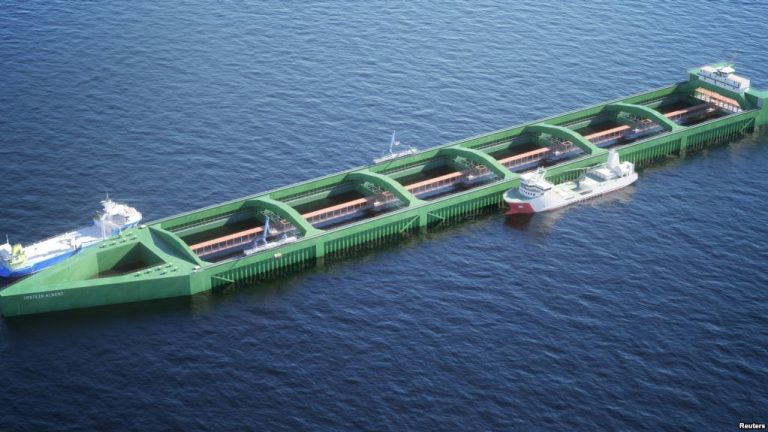 Norwegian salmon farming firm Nordlaks is proposing a design for a 400-metre long fish farm, as in this illustration, that would be able to withstand exposed seas, away from coastal areas where fish suffer from marine lice. Photo - Reuters.
Editor

OSLO — Atlantic salmon farming companies are designing huge pens to raise fish in the open seas in a radical shift from calm coastal waters where marine lice have slowed growth of the billion-dollar industry.

The drive for new designs by Norway, producer of 54 percent of all farmed Atlantic salmon in 2016, will have to cope with ocean storms that can rip cages and free thousands of fish.

“The industry has to develop and to solve the environmental challenges it has, especially linked to salmon lice,” Norwegian Fisheries Minister Per Sandberg told Reuters, referring to parasites that often spread infections resistant to antibiotics.

One in five salmon farmed in Norway dies before reaching maturity, partly due to tiny blood-sucking lice that latch onto the outside of the pink fish.

Lice, also a problem in other countries, tend to concentrate in the more stagnant waters of Norway’s bays and fjords where farms are now based. A shift offshore would expose farms to ocean currents that should help to sweep away the lice larvae.

The Norwegian Directorate of Fisheries is seeking innovative fish farm designs, both for offshore and coastal waters, in a two-year drive open until November 2017. So far it has approved a handful and is reviewing about 40 others.

Many borrow ideas from the offshore oil and gas industry.

The lure of offshore pens is that they would open almost unlimited areas for fish farms beyond bays and fjords, attracting investors and transforming the global aquaculture industry.

Norway produced 1.1 million tons of salmon in 2016, more than double the output of number two producer Chile, and earned $7.6 billion in exports. Smaller producers include Britain, the Faroe Islands and Canada.

But Norway’s production, by companies including Marine Harvest, SalMar and Leroy Seafood, has been little changed since 2012 due to lack of space and disease, even as rising demand has pushed prices to record highs.

“We’ll take the project that works best, has no salmon lice, the lowest cost, no escapes and is industrial,” Marine Harvest’s chief executive officer Alf-Helge Aarskog told Reuters of a range of designs the company has proposed.

“Escaped fish mix with the wild salmon – that creates problems with genetics,” said Ingrid Lomelde, of the WWF Norway Farmed fish are bred to grow fast and fatter than their sleek wild cousins. Interbreeding could produce fish too weak, for example, to leap up waterfalls to reach spawning grounds.

Among approved designs, SalMar is building what it calls the “world’s first offshore fish farm” to start in late 2017 — a floating circular construction 110 metres (360 ft) across that looks like a drilling rig, apart from huge nets dangling below.

The 700 million Norwegian crown ($82 million) yellow and white steel construction is being built at a Chinese yard, and will be big enough to raise more than a million salmon.

“We’re starting to install the anchoring systems,” off the coast of mid-Norway, chief financial officer Trond Tuvstein said. “No one wants escapes,” he said.

In Chile, Felipe Sandoval, head of industry group SalmonChile, said the government wanted more research into farming in more exposed and offshore areas. “We will have to wait a bit to see how this takes off,” he said.

Most approved designs in Norway are still on the drawing board, such as a sealed 44-metre (144.36 ft) tall egg-shaped tank by Marine Harvest where the fish swim inside in seawater filtered to keep out lice, or a 400-metre long farm by Nordlaks shaped like a supertanker.

Marine Harvest hopes to start building an “Egg” prototype in mid-2017, CEO Aarskog said. The sealed design would be suited for calm waters in fjords and is favored by environmentalists and river owners as a way of isolating any disease.

If successful, “the technologies will allow aquaculture in more exposed areas globally” including for other types of farmed fish such as sea bass or bream, said Tore Toenseth, an analyst at SpareBank 1 Markets in Oslo.

Huge new cages able to withstand storms could be used anywhere, from Japan to the United States, he said.

But river owners say not enough is done to protect wild stocks by the expansion of farming.

“It’s a very vulnerable system,” said Erik Sterud, of the river owners’ association Norske Lakseelver, who estimates there are now just 500,000 wild salmon off Norway against half a billion farmed fish.

Companies are willing to invest hundreds of millions of crowns in the new technologies partly because Norway will award licenses to operate the new fish farms, almost for free. 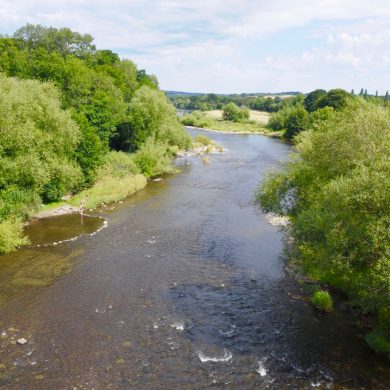