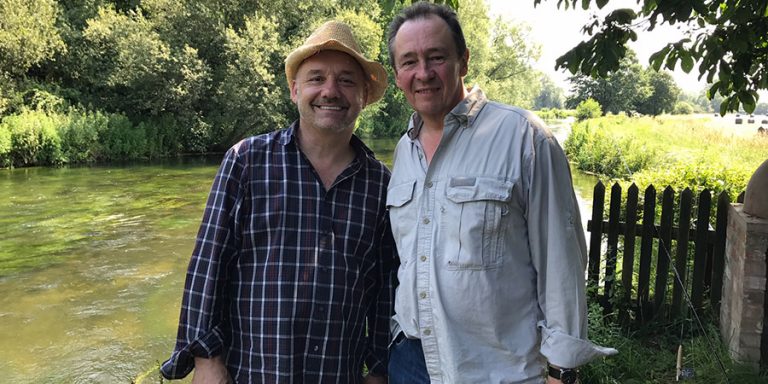 The six-part Paul And Bob Go Fishing (working title) will see the comics travelling Britain on a series of fishing expeditions, where they talk about life, death and comedy.

Production company Owl Power explains: “Paul Whitehouse is an experienced fisherman; Bob Mortimer is a complete novice. Their friendship stretches back for decades, but they’ve recently reconnected after both suffering very serious heart problems and each staring death in the face.

“Paul has suggested to Bob that he take up fishing to help recover from his triple heart bypass. Now, these two much loved comedians will tour the country to fish side by side in some of the most picturesque landscapes the UK has to offer.

“Across the half-hour episodes they’ll dissect life, death and comedy. Paul will be in charge of the fishing while Bob is in charge of the accommodation and cooking heart-healthy food. From recipes, regrets, relationships and rituals; to childhood, comedy and the countryside, the pair will discuss everything alongside the ever-present shadows of showbiz and mortality.”

Bob Mortimer says: “Paul is a lifelong friend and the chance to have one last adventure together before we snuff it was irresistible. He is an experienced angler and I haven’t fished since I was a teenager. As a teacher, I expect him to be brutal.”

Paul Whitehouse says: “Before Bob Mortimer and I die of heart disease, we’re going fishing all around the country. I’ve sold it to him by saying fishing is long periods of boredom punctuated by short, sharp periods of incredibly intense boredom. As a Middlesbrough fan, he lapped it up.”

Executive Producer Lisa Clark comments: “This authentic series is as much an insight into the hearts (literally) of two of the UK’s best loved comics as it is about capturing the serenity and beauty of one of the most popular pastimes in the UK. Their recent experiences will see them reflect with searing honesty on life’s big topics. It promises to be revealing, emotional and highly amusing.”

David Brindley, Head of Popular Factual at the BBC, said: “Frankly, it’s a joy to be working with two of the country’s finest comedians. I’m delighted Paul and Bob have allowed us to follow this very intimate fishing expedition and eavesdrop on their frank, moving, and of course, entertaining musings.”

The series is expected to be broadcast in 2018.