And so the winter work begins… 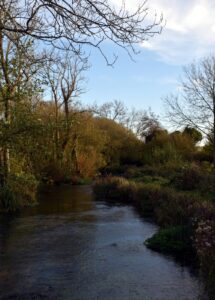 If you start the month of November working in this valley without a busy winter pending then something has gone awry. Every keeper is inevitably asked by the occasional naive angler if they have the winter off.

We don’t, and at this time of the year the next six months work are clearly laid out and winter work muscles that have grown flacid on a summer of strimming, mowing, weed cutting and fiddling with fish must now be stretched out once more as preparations are made for the next trout fishing season. 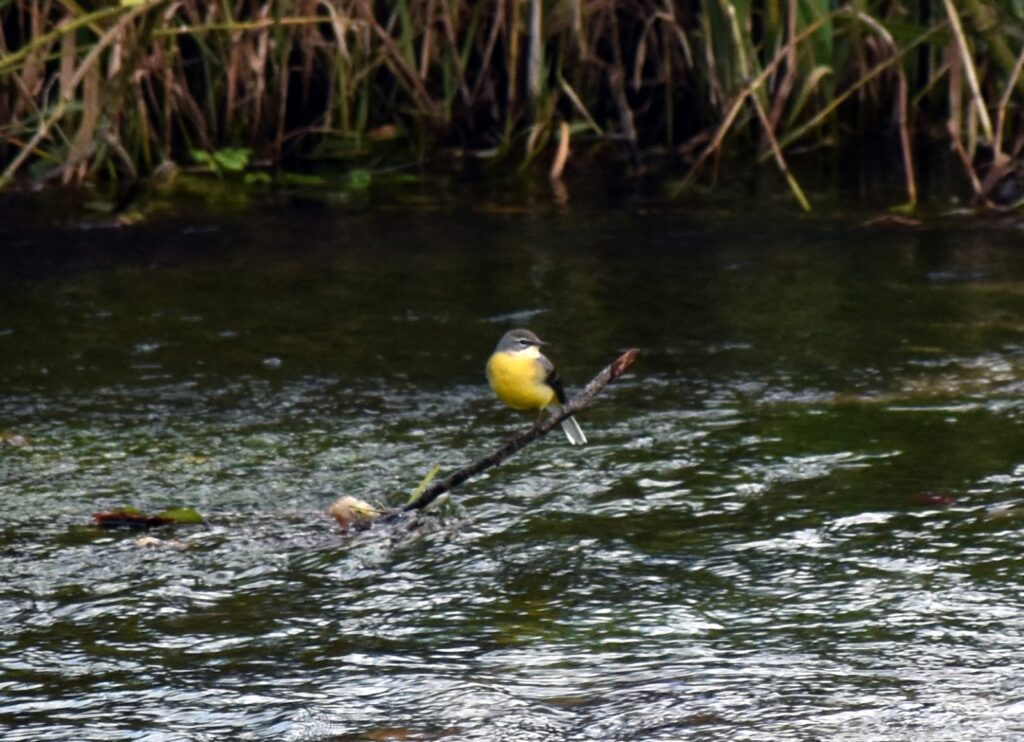 Crack willow puts on up to six feet of growth in a summer in this valley and must be attended to if their bid to take over the world is to be halted. Many will have bowed their heads with the increase in weight on their branches and many lie prone and would put down roots and grow up again if left where they lay. This past week we have already attended to a dozen ash trees that were marked out as having the dreaded dieback, with several more to do this winter and the next. Two bridges are approaching the end of their days and we have a few days driven shooting to prepare for. Normally we’d be flighting duck on a dark wild night at this time of year. But wild dark nights at this time of year have been few and far between for the past three years and while the pond has been fed and hides prepared no bismuth has been blasted in the air. This summer phragmites growth in the pond has been prolific and rather than cut it back now for flighting there is a case to be made for leaving it until February or March in the hope that we can drive a few ducks out of it on one of our driven days rather than flight the pond.

The river remains very low and I apologise for mentioning it already but this part of the world really needs rain. 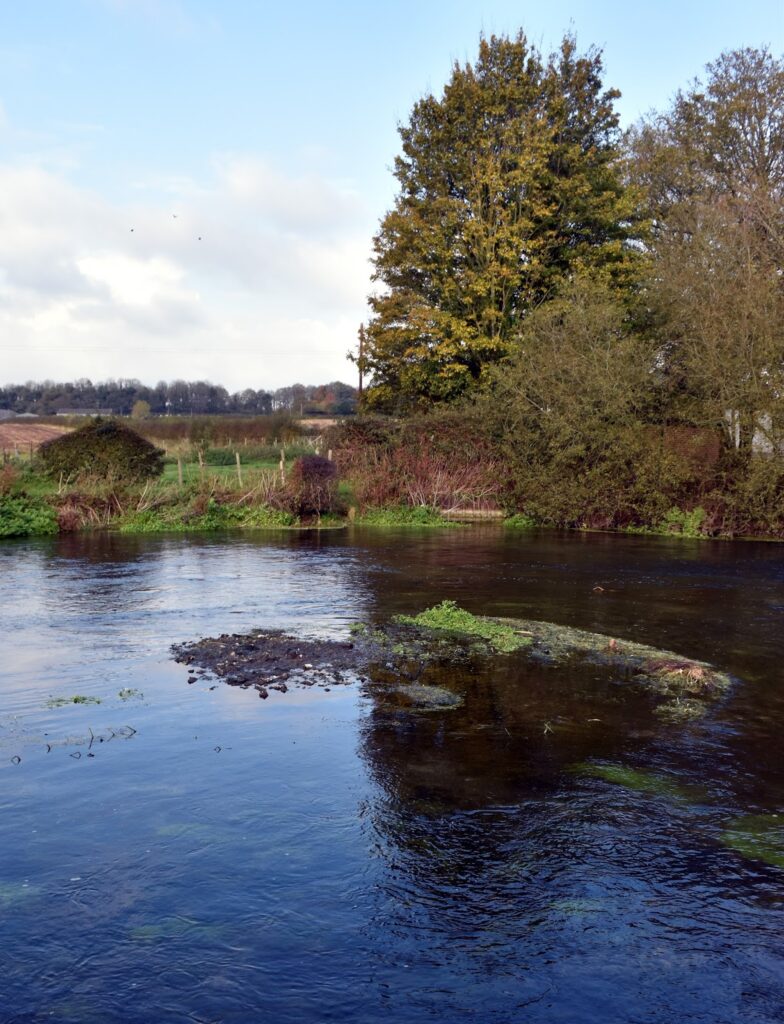 Here’s one of that gravel bar on the Itchen which has appeared for the last two winters.

The Itchen has a similar requirement for serious groundwater replenishment this winter .

As I write it is raining and I can hear a gutter overflowing. There are still many leaves to fall and this may need attending to, but I will proceed with caution as it was on this day a few years ago that I set out to undertake a similar task and ended up in casualty after falling through a roof. The body’s a couple of years older now but the brain’s slowly catching up in the wisdom stakes.

At this time of year thirty years ago keepers would have knocked the fringe off and edged in the margins on the river in order to make electro fishing operations more effective and to prepare the channel for increased winter flows. 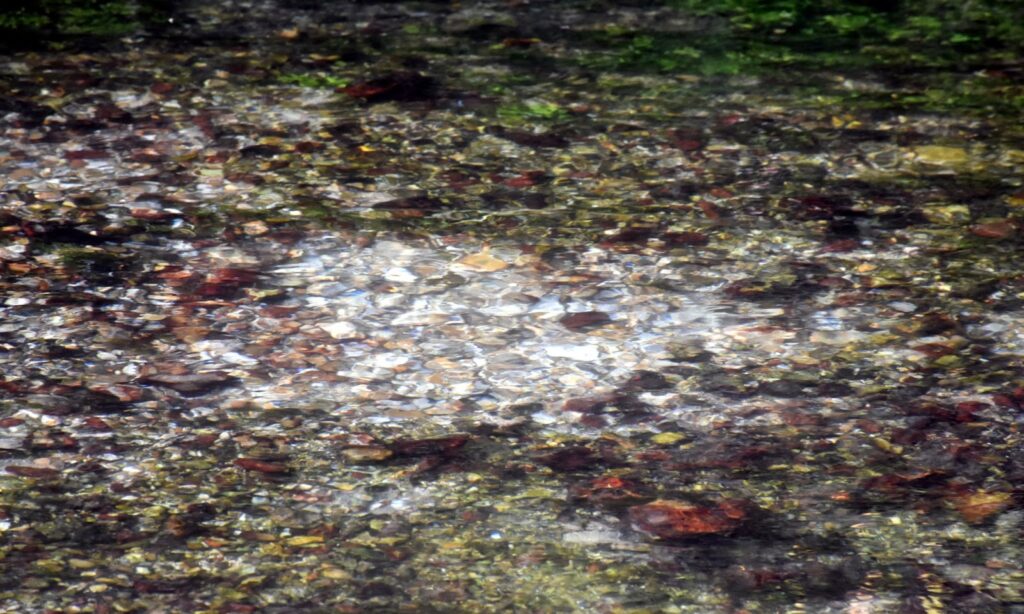 It’s a bit different now and while the fringe undoubtedly benefits from a bit of cut and collect it can be left until the river’s discharge starts to increase. Allowing cress and marginal growth to pinch what flow remains keeps gravel cleaner in a low river. Edging in and digging back too early can lead to increased deposition on spawning gravel due to a reduce rate of flow. It also provides cover for the ever increasing number of grayling fishermen (and stakeholders in the chalk stream environment with a shared interest in preserving these important rivers – the more people willing to stand up and put in a word for these rivers the better)

Nowhere is the lack of water more evident than in the Mill Stream. It is a long time since it has remained fishable throughout the season. I can make a rough guess as to how long it’s flow will last in summer by the number of notches the old hatch on the house is open. Eight notches at the end of April would see it fishable until a few weeks after the June weed cut. For the past three seasons there have been no notches in April and the hatch has remained closed at the beginning of the trout season. For the past two years I have had to put a plastic sheet across the front of the hatch in order to stop the few leaks that spurt from between the boards in order to maintain sufficient water height on the mill stream to run the stew pond and streams through the garden. As a result the mill stream is effectively mothballed for the summer and will be cut back when/if increased winter flow allows. The reed growth is lush and is easily cut back but once again with an eye to a driven day shooting, it is currently being fed with barley in order to up the number of wild duck in the air on a shooting day. 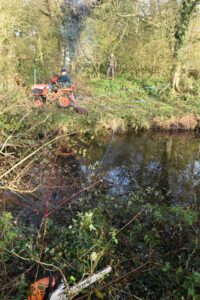 For the past two days we have been attending to crack willow that has dropped down behind the flight pond over the course of the summer. It has been bumped up the list of matters that need attending to as it is an area that we would like pheasants to be on a shooting day. So we will get the disturbance out of the way earlier then step back for a few weeks in order for the pheasants to return.

It’s quite a tight spot to be taking down big boughs of willow and in scenes reminiscent of Last of the Summer Wine our trio have been forced to invoke the forces of ingenuity in order to get the job done. 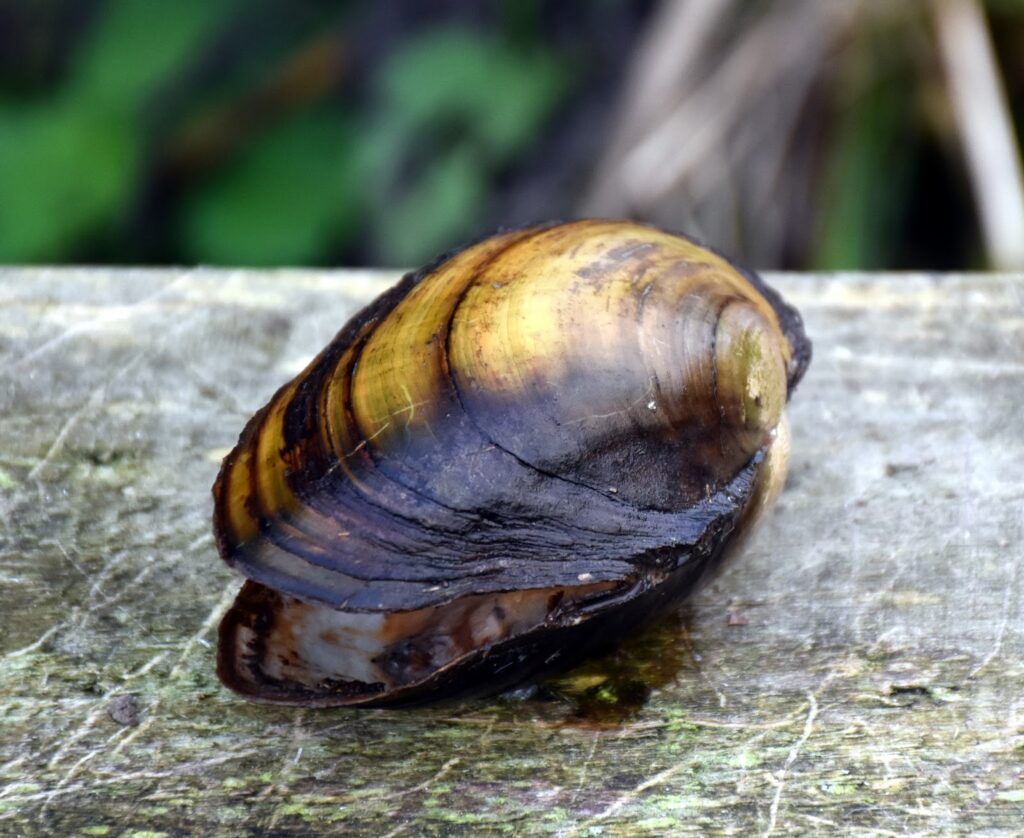 We’ve come across a few swan mussel shells on the bank. There is a small population in the pond that grow to about four inches in length. Not many critters eat swan mussels and it is probably an otter touching base with a pond from which he has already cleared of fifty forty year old carp and numerous bream to six pounds or so.

Heron are also causing havoc in the river in the current low water and at this point I’ll refer you to current method of leaving summer marginal growth and tree growth along the river until levels are on the rise and spawning as done as any cover that will inhibit avian predation is to be welcomed.

While we’re on avian predators. Here’s a short clip taken on my far too clever phone of Kingfishers at war. I’ve come across half a dozen violent confrontations this summer. I was a little bit slow with the phone but for the first two seconds you can just make out the pair in the water, each trying to drown the other.

In other news, Madam and myself visited Mottisfont to tale in the much talked about Kaffe Fasset exhibition.

It was very good, and come on Nana, up your game with regard to quilting! 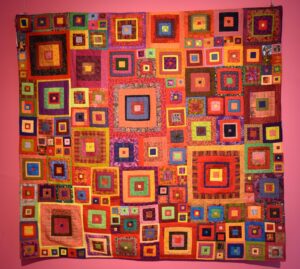 This was my favourite although the photograph doesn’t do the detailed work justice,

And this was Madam’s. 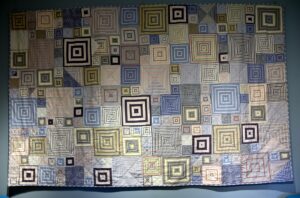 Turns out we both like squares but can each appreciate differing hues.

And during the public inquest as to the secret of our attainment of seventy years of marriage I shall eschew the standard reply of “a bit of give and take ” and offer up the afore mentioned line regarding squares.

We have already established that for the Flemish, Christmas has already begun.

There is an unwritten de Cani rule that the “C” word is not mentioned before November 17th (a rule that, in these lawless times, is increasingly flouted)

Anyway, we need one of the dog. 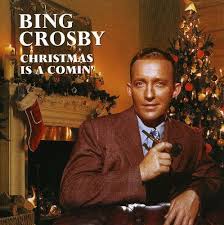 Here he is channelling his inner Bing Crosby to herald the impending season. 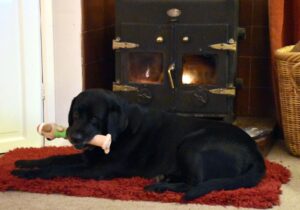 Didn’t we just do Christmas?

Start typing to see results or hit ESC to close
salmon fly fishing chub roach pike
See all results
More Stories
Kiss the Water – You've seen the Film, Now WIN the DVD!
This website uses cookies to improve your experience. We'll assume you're ok with this, but you can opt-out if you wish.Accept Reject Read More
Cookies Policy