The results compare favourably with those from other famous UK salmon rivers such as the Spey, Tweed, Findhorn and Tyne, all of which have experienced reduced catches this year. In addition, rivers in Iceland, Norway and Canada have also suffered decreases with some Canadian rivers reported to be up to 60% down on their 5-year average. Although cyclical variations are a typical feature of Atlantic salmon populations, it is the increase (in catches) in the face of national and international decreases that make the Wye and Usk stand out.

The upturn follows a decade or more of investment in a series of projects to put right the damage done to stocks of this iconic and economically-important fish. The work has included re-establishing access to spawning grounds through fish pass construction and barrier removal, restoration of juvenile habitats, buying off commercial fisherman and restricting the number of fish taken from the river. On the Wye, a pioneering scheme has been developed specifically to restore those streams affected by acid rain and, more recently, to reduce the effects of agricultural pollution.

Dr Stephen Marsh-Smith, Executive Director of the Wye & Usk Foundation (WUF) said: “This year’s results have been really encouraging.  Many novice anglers caught their first ever salmon and there was a significant increase in the number of anglers returning to the Wye, bringing a much needed boost to the rural economy of East Wales and Herefordshire.”

“Although the overall restoration is not yet complete, funding has been secured to continue the work for the next three years. However, we also depend on the marine survival phase of salmon, as that is one factor entirely beyond our control.”

Peter Gough, Senior Technical Specialist from Environment Agency Wales (EAW) said: “After many years of disappointing figures and concern, during which many have worked hard to improve conditions for salmon in these two important rivers, it is heartening to see these figures. Salmon stocks often surprise, and so we are perhaps understandably cautious and slow to recognise the reversal of a trend and then improvement. However, the signs are good and the significant works to improve and extend the spawning and nursery habitats in the rivers and to maximise the numbers of salmon surviving to spawn are important elements of our investments in the future that are still to mature. I certainly hope that we will see the dividends from this over the coming years.“

Don Macer-Wright, a middle Wye fishery owner added: “The salmon fishing here has been the best for over 20 years. I believe this turn around in salmon numbers has been largely due to the vision and work of the WUF and partners, in particular the opening up of over 400 miles of blocked spawning grounds. This has been an extraordinary achievement and we are very lucky to have such a dedicated and driven team working on our behalf. Combined with catch and release we may well be within sight of a return to the Wye’s pre-eminence as England and Wales’s greatest salmon river.”

Gary Turner a salmon angler from Northampton, who caught a number of salmon from both the Wye and Usk in 2012, commented: “A trip north to any of the big Scottish salmon rivers is always a planned, expensive and weather-reliant affair. I have fished the Wye and Usk a few times recently. Given that I can see the river conditions live on the WUF website and get to these rivers in a couple of hours, they have become a very attractive alternative. Added to that, there are definitely more salmon in the Wye and Usk this year. I can’t wait to go back in 2013!” 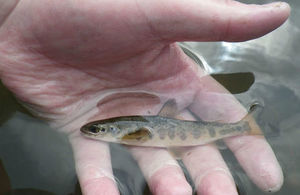 Salmon in Derbyshire river a first since Industrial Revolution
This website uses cookies to improve your experience. We'll assume you're ok with this, but you can opt-out if you wish.Accept Reject Read More
Cookies Policy