‘Namgis Closed Containment Salmon Farm is the first commercial-scale, land-based fish farm for Atlantic salmon in North America. It’s part of a global trend of large closed-containment farms also being pursued in Denmark and in Chile.

The ‘Namgis smolts will grow to maturity in just 12 to 15 months in a facility nearing completion not far from Port McNeill on Vancouver Island. The ‘Namgis farm uses five 500-cubic-metre tanks capable of producing a total 500 tonnes of fish each year.

The system is the first of five identical modules to be built on the site, when the designs and systems are proven, for total capacity of 2,500 tonnes a year, about the same as a net-pen salmon farm.

Despite the extra costs associated with land-based salmon farming, the product needn’t cost much more than net-pen Atlantic salmon. The carefully controlled environment in an advanced closed-containment system allows the fish grow to maturity twice as fast, in a smaller space with less feed than net-pen salmon. 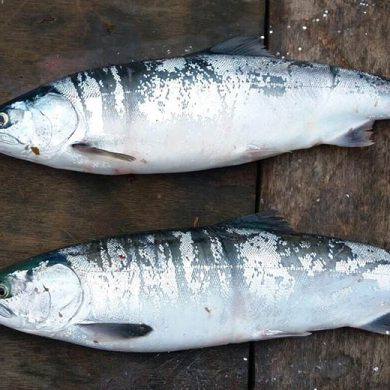 English Anglers Urged to Report Pink Salmon Catches
This website uses cookies to improve your experience. We'll assume you're ok with this, but you can opt-out if you wish.Accept Reject Read More
Cookies Policy