The last week of our Trout fishing season and as ever we finish with a flourish with two fish just shy of five pounds put on the bank. Circumspect fish that had either grown up in the river or were stocked several seasons ago as they don’t go in to this stretch at that size. Both inevitably fell to a nymph and while the presence of one was known to many of our anglers, the fish that was taken forty yards upstream from the fishing hut seemed to appear from nowhere but was probably the large hen who has been tucked away all season under the alders downstream from the fishing hut. Where fish are bunched up there is a certain amount of “mucking about” going on with much jockeying for position. 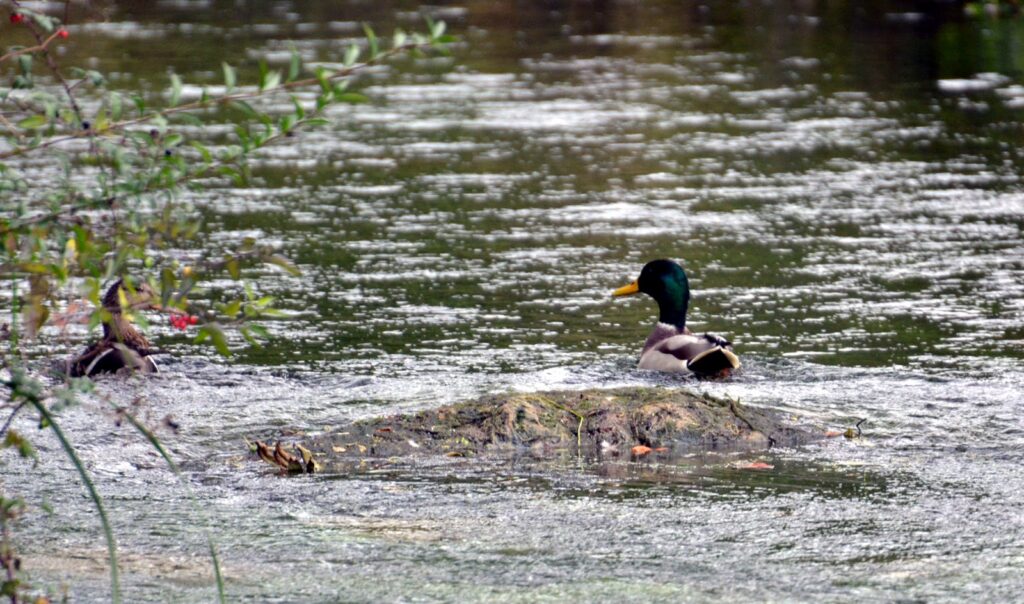 The river has dropped a little these past two weeks as weed that has helped to hold up water levels for much of the summer is weakening. Blanket weed rolling away downstream will pull out weak weed…

and these two swans aren’t much help 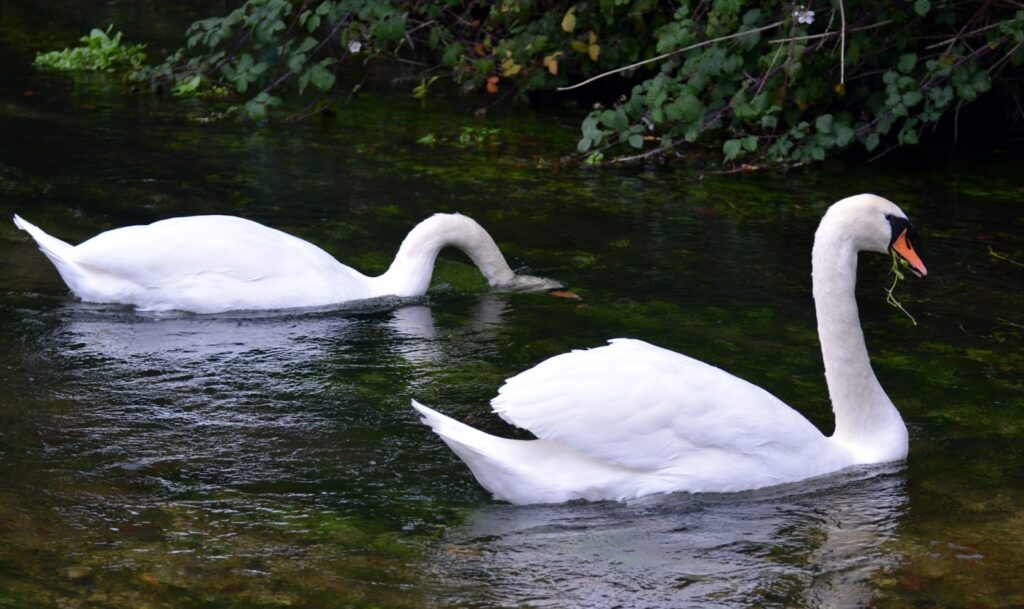 But we’ll settle for two over twenty that some beats must endure.

Several times this past week I have taken in the spectacle of competitive Kingfishers trying to kill each other. The aeriel dogfights that take place up and down the millstream over masses of minnows are a feature of most summers. But this year it seems to be a little more physical and I have come across birds locked beak to beak on a branch of an overhanging hawthorn and a pair engaged in an avian sword fight on my employer’s kitchen roof.

While we are on the brutality of birds, a crow was unfortunate to be trapped inside the chicken run where our chooks spend a morning until all eggs are expressed (an early release results in oeuf being passed hither and thither thus avoiding the fridge to pan to plate experience)

Our attack chickens didn’t like the look of the captive corvid and in a matter of minutes had battered the thing to death. 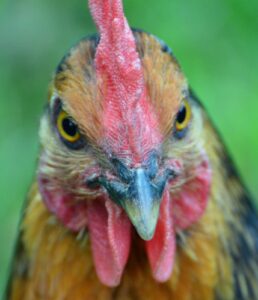 We used to have a problem with crows flocking in to take scraps put out for the chooks but since the incident of the captured corvid they don’t come down any more.

We’ve just taken delivery of some more chickens. They are about ten weeks old and will hopefully be on stream regarding eggs in the new year. Hopefully the eggs will be as good as the ones that pop out of our “attack ” chickens which are some of the best we have ever had and as they graze on grass all day long, the eggs are rammed full of extra Omega 3’s which we are currently told are a good thing to take on board, but ten years hence, who knows?

My egg a day was shortening my life via the medium of Cholesterol once, now it’s extending it through the power of the number 3 and all things linolenic.

I’m reluctant to invoke the spirit of Marvin Gaye as I’m sure he’s a very busy man, but what’s going on?

Apologies, almost forgot, here’s one of the dog. 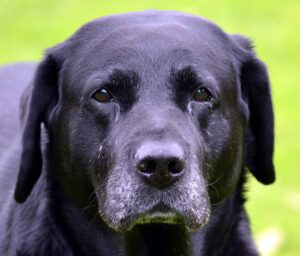 Who assists me each day in a shared quest to keep our pheasants somewhere about the parish.

It is evident now that the birds have quite a bit of “Michigan Blue” in their line, a bird that is renowned for its ability to fly well but also a penchant for a good long walk. 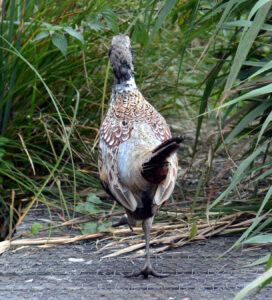 With the cricket season over for us (but not for Child B who is currently wafting the willow for South Yarra CC in Melbourne) It’s back out with the walking shoes and knapsack at the weekend to resume efforts to proloungue life.

We have wandered up the Wallop Brook from Kings Sombourne which took a few hours and at one point we crossed the famous Horsebridge shallows which were completely weed free which was a surprise as I remember quite a bit of ranunculus there during my brief employment at The Houghton Club all those years ago. 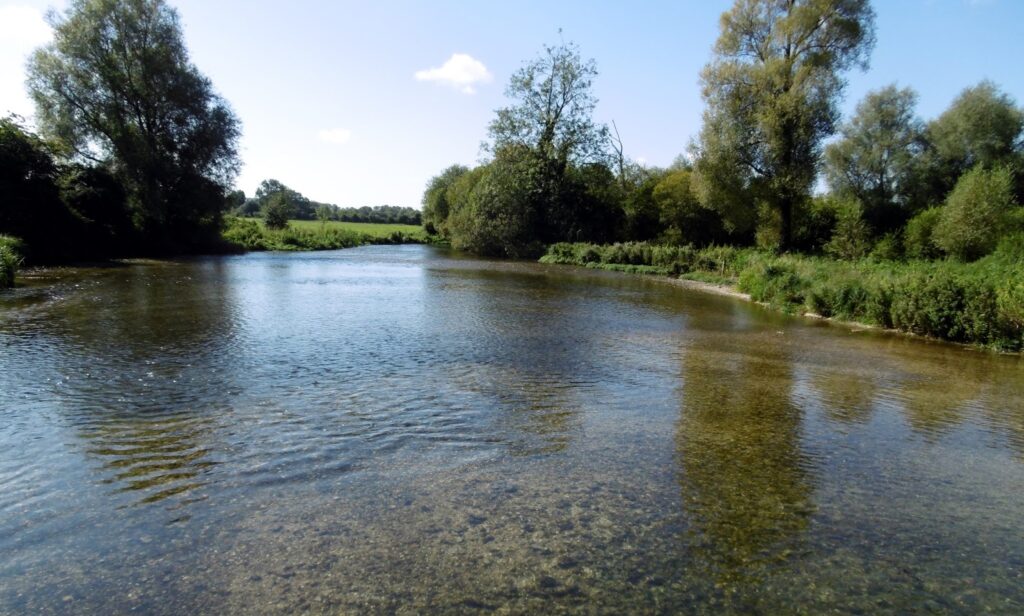 Here’s one for all those flat earthers who think the summer’s been a wash out.

This should be the source of the River Itchen. 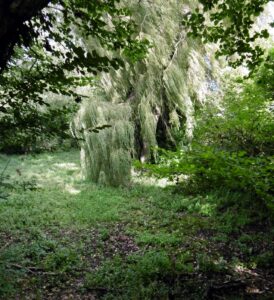 It currently rises quite a way down the valley towards the “Chi Chi” village of Cheriton.

We ended up walking around the back of Hinton Ampner where Otis was welcomed by the National Trust and their signs. 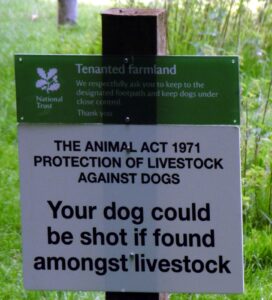 It seemed to be a trip for signs as this was displayed on a bridge over the formative river Itchen, I may commission some for our own river crossings by way of a warning. 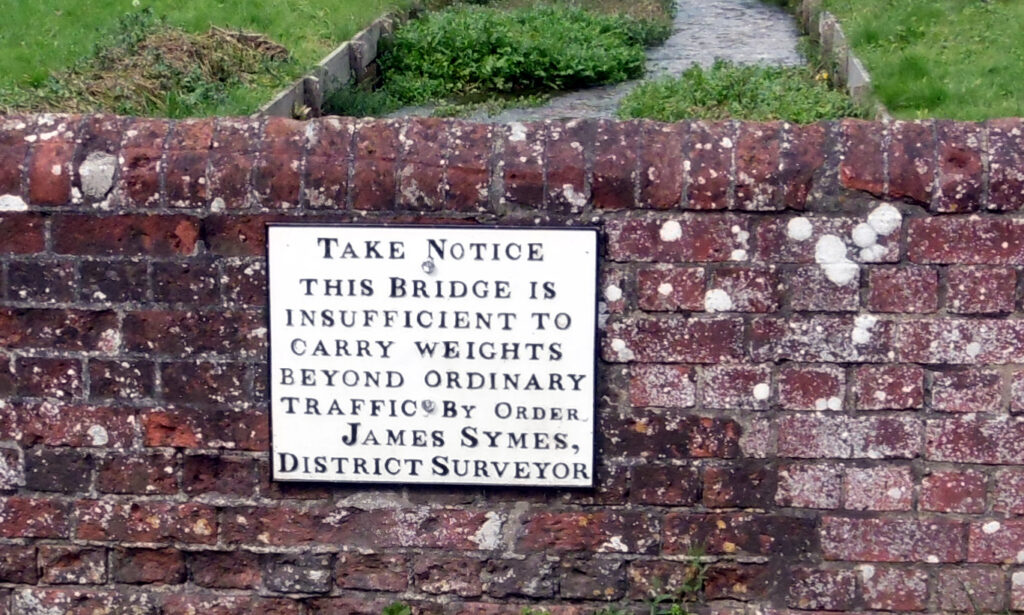 I’m sure Tarrant would have appreciated one having fallen through one of my older ones a few years back. I did tell him not to use it, but then Tiswas was always the anarchic alternative to Mr Tidy beard and his purple dinosaur and I suppose old habits die hard and if somebody tells you not go somewhere then you go there. Mary Berry did as she was told and was nothing short of effusive about our bridges at which point it seems relevant to put up this picture again

Apologies I couldn’t find the photo of Mary on our bridge (it’s on here somewhere from a few years ago and in the book) so here’s one of her Mum attending to a fig on her market stall, I think that’s right, but it has been known for my complicated photographic cataloguing system to go awry. 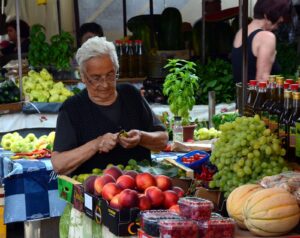 “Crossing over To the Other Side” a study of the efficacy of Britains best bridges is still available in all good book shops and should serve to the likes of Tarrant that if instruction is followed our bridges can be quiet an uplifting experience.

I seem to have dropped a few names in the last few lines, for which I apologise, there are other “names” I could mention that were indifferent about our river crossings but I’ll save them for the book.

“It isn’t the best bridge I’ve been over nor the worst, but it’s prime function is beyond doubt” – Googie Withers

Just the other day it was off up the Itchen again, this time to Easton and after a quick perusal of the short stretch that I am charged with falling in and out of, it was off upstream to Itchen Abbas, via Chilland and then on to Avington Park. 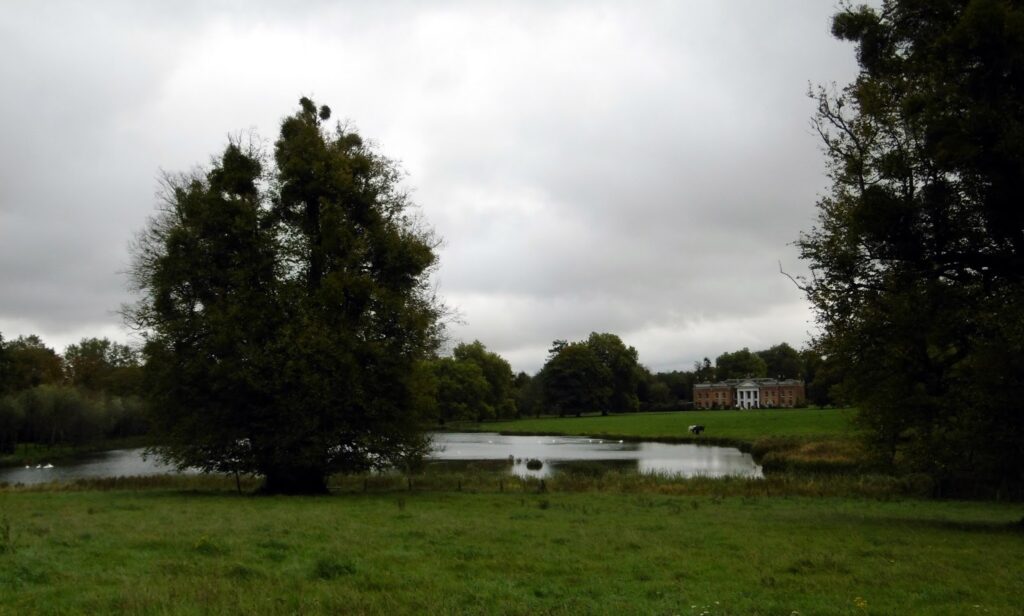 Avington was quite the thing in Put and Take Trout Fishery circles in the late 70’s and early 80’s, rarely out of the angling press at one point it held all of the various UK trout records, mostly caught by Tony Pawson. I was lucky enough to fish it with my father when we travelled over for the day while holidaying in Swanage. We caught fish and flicking a fly aged twelve or possibly thirteen on the carrier that winds between the lakes was my first time on a chalk stream. We caught some big Rainbows that were standard for the venue and a great day was had by all but I don’t remember the house (pictured left) being there.

Our excellent Ordnance Survey circular walking guide ( the walks are circular, not the guide, coincidentally written by someone in the village where we live who is also not circular) states that the house has been in situ for over four hundred years but neither I nor my father remember it being there, and at this point I’d like to pose the question that while all this walking is balm to the body “one foot two foot” may be starting to affect the mind and memory.

I remember much about the lakes and the day, but the house just over our shoulder? 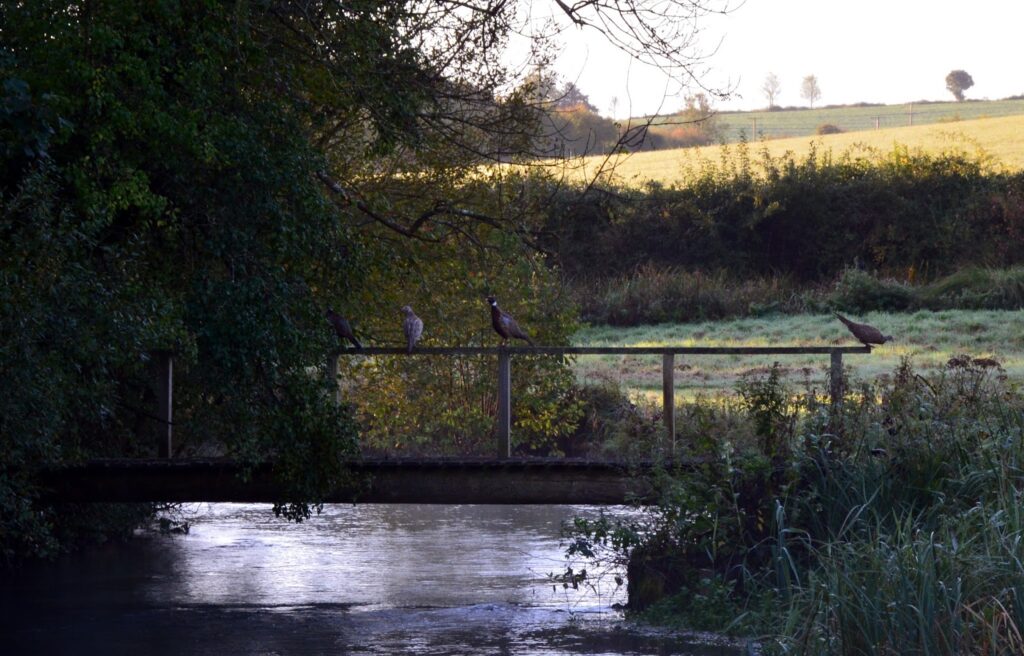 And there we have it, a season review to follow, but I think we have one or more surprises to come this week with regard to fish put on the bank. Chainsaw muscles that have grown slack on a diet of mowing and strimming will soon be required to return to action as there is much to be done with the orange saws this winter. We are currently “log rich” but we do seem to be whacking through them at quite a rate. The last knockings of an old oak at the moment that fell over in the flooding of 2013/14 but well seasoned (it hasn’t got salt and pepper on, it’s been down and drying for two years) all the way once the oak is gone.

We have a few rods booked in for bothering Grayling during the winter months and a half rod (one fixed day a fortnight) available for trout fishing next year, if you’re interested in either don’t be a stranger.

Start typing to see results or hit ESC to close
salmon fly fishing chub roach pike
See all results
More Stories
Mahseer Trust Competition – Win a Fishing Trip to India
This website uses cookies to improve your experience. We'll assume you're ok with this, but you can opt-out if you wish.Accept Reject Read More
Cookies Policy