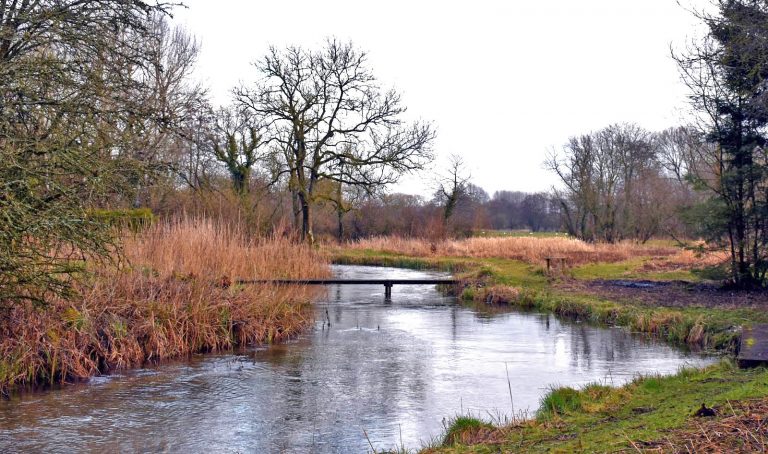 Hello Everybody and welcome to Ditch Watch.

Still dry, although the river has crept up slowly following the retreat of Snowmageddon. The Field known as “Spring Bottom” remains dry although the sheep have been moved off it which is a positive sign. Some of our banks are close to assuming the status of “soft” which is another good sign. 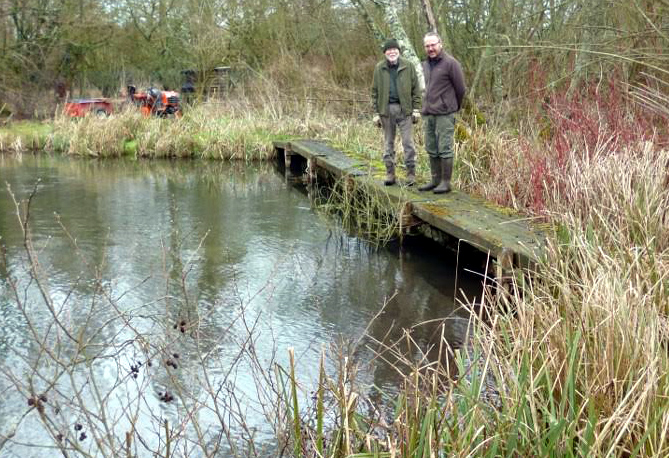 Work this week has been varied, 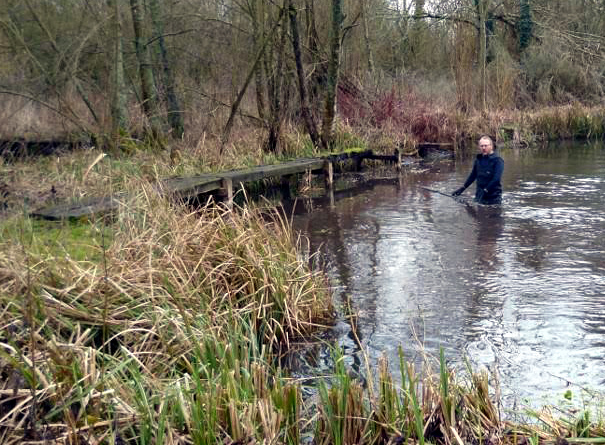 The walkway below the fishing hut is exactly twenty three years old.

I built it when I was a stronger man, aged 26, listening to the Cheltenham Festival through bleary eyes as an eight week old William required feeding every other hour and subsequently Madam and myself were a little fatigued.

We spoke to him via the magic of the internet the other day and he was cooking a steak, which is all well and good as he’s an independent twenty three year old a long way from home but it was one thirty in the morning where he was and he’d already completed the old standard Q&A between Parnet and child on what he had had for his tea. 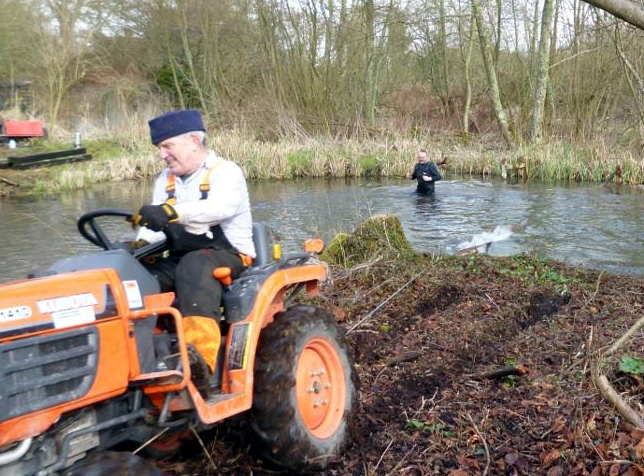 The posts supporting the sleeper top were fast approaching the end of their life and considering the doofus who built the thing, the bridge proved remarkably resilient and clung to its position stubbornly. 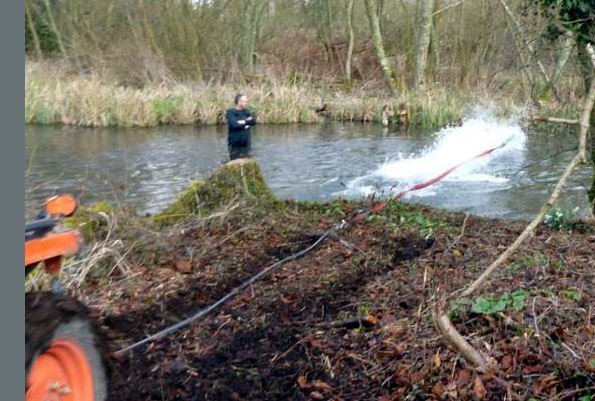 The sleepers came off easily enough and two thirds of them are in a reasonable enough condition to be used again, but the four by four posts that I banged in with the mother of all bumpers when I had strong arms put up some resistance and winches, tractors and the ire of Ludgershall and English had to be invoked to ease them from their lie.

On the cusp of fifty, I don’t knock posts this far into the river bed anymore, if you fish here in the coming years you may want to wear some form of buoyancy aid or at least break step when you cross the replacement bridge. 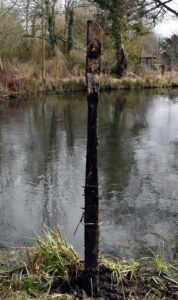 On removal it was all too apparent that the posts were approaching the end of their life. Not rotten, but eroded by twenty three years of river flow that had reduced them from a four by four post to a two by two. The section that had been banged into the bed was in the condition that it had been in when it was banged in all those years ago. I have pulled out posts older than these that have been in a similar condition and at this point I’d like to make a pitch for an expensive anti ageing cream formed from the scrapings of the river bed.

Although we may need a fresher face than my own to be the face of the product.

Fresh oak posts are on order and some replacement sleepers have been sourced to rebuild the bridge as was and given the required amount of red wine, dark chocolate and bifidus digestivum can we’ll all agree to meet up in twenty three years time to run through the process again. 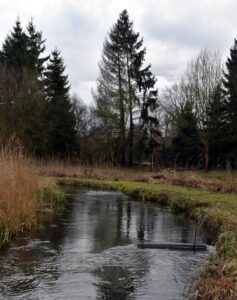 The tin is out and I’m tickling up a few heaps of silt/expensive anti ageing cream that would taint the river when the weed growth really kicks in and pushes water into places it hasn’t visited for much of the winter. With the end of the grayling fishing season imminent I’ve taken the tip off the fringe which is now demonstrating signs of imminent lush green growth. The cold snap last week hit our frogs hard. I’ve come across a few dopey specimens on the road in the last week, a dangerous journey from hibernating on higher ground on the bank and verge to the warm water of the Mill Stream. The school pond also experienced thick ice and a bag full of dead frogs had to be removed before Madam took Class 2 out for “pond dipping”

While we’re on school, the kids produced a leaflet to be pushed through doors in the village highlighting the risk of ground water flooding. Groundwater flooding isn’t going to happen this year but well done the school for raising awareness of how water works in a chalk valley.

The Shepherd’s hut over on the Itchen has received a coat of paint as the canary yellow base coat was beginning to show through in a few places. The weed seems to be slow to grow on that stretch of the Itchen compared with the verdant Dever and there will be nothing to cut in April. Trout fishing starts a little earlier over there so we keep our fingers crossed for some early hatches of grannom. Here on the Dever Trout fishing breaks out at the end of April. We have a full complement of rods and a couple of people waiting for vacancies. In just over two weeks they will all arrive for lunch where I will be expected to explain my movements throughout the course of the winter and present them with a river full of fish for four weeks time.

Confusion was caused on Mother’s Day when William sent some flowers to his Mum.

Because they needed to be signed for, he had them delivered to the school on the preceding Friday.

Here’s a photo of the label.

Three of them named one of their darlings “William”

It took some detective work, and at one point the head teacher pulled rank and claimed the blooms as her own but the mystery was solved and the flowers eventually delivered to their intended destination. 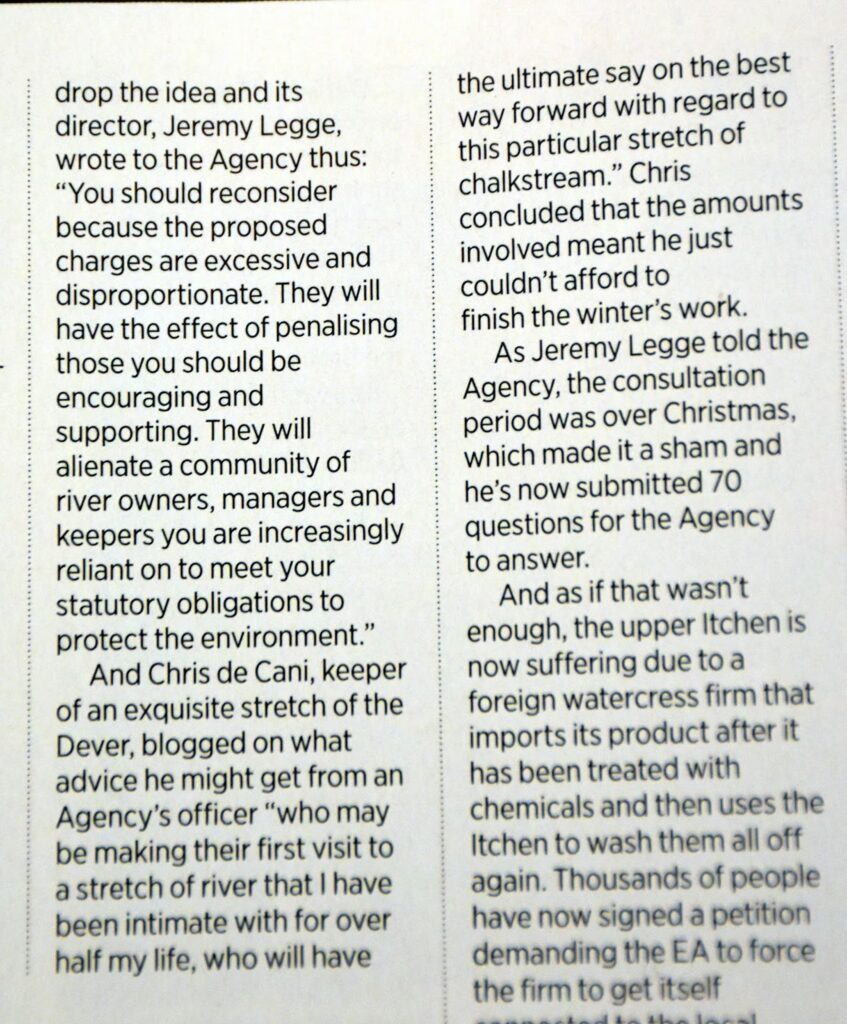 It seems this house has made another appearance in Trout and Salmon Magazine.

It’s a big month for the EA and their efforts to introduce exorbitant charges for a range of services and also in their battle with the weasels at the water companies who are opposing the EA’s efforts to reduce the impact of abstraction on the both the Test and the Itchen.

The house also rocked up in Fly Fishing and Fly Tying magazine last month with a few thousand words and many pictures regarding tricky fishing for pristine grayling.

There has been a lot written about Ken Dodd since he passed away so here’s a few more.

I remember seeing him live at the ABC Theatre (Regal as was) in Chester. It must have been the late seventies as the theatre that once played host to the likes of The Rolling Stones and Morecombe and Wise was converted into a cinema in 1980. I attended with my parents and brother and sat in the stalls on the left hand side looking at the stage. The Diddy Men marched down the aisle within touching distance confirming that they were actually real beginning a quest for magical mines that we only called off a few years ago.
There was no support act, there was no need and it was one of the latest nights I experienced in my formative years. I do remember a lot of laughter and a man who appeared to be in his element on the stage.

I regret not making the effort to see his act for a second time.