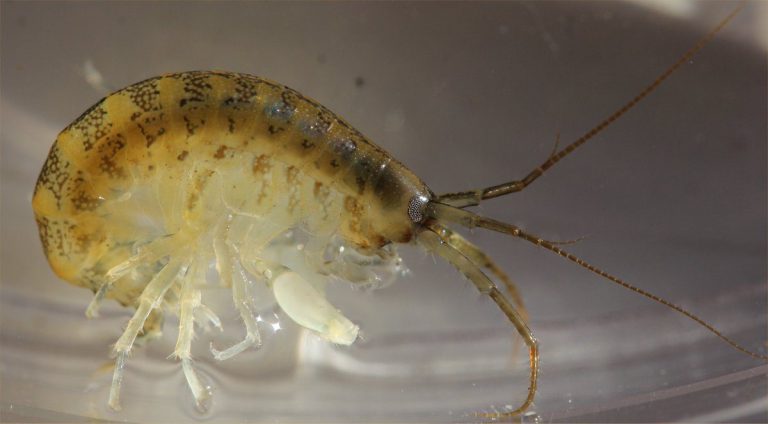 Scientists working with the charity Salmon & Trout Conservation UK (S&TC UK), who have been investigating the health of our rivers across the country, have discovered the non-native demon shrimp Dikerogammarus haemobaphes lurking in the depths of our rivers and this could be disastrous for the future of our native aquatic wildlife.

Nick Measham from S&TC UK is extremely alarmed by the rapid spread of this foreign invader. He said, “This demon shrimp, like its cousin, the killer shrimp, is an eastern European invader about which we know very little. It is an omnivorous beast and it’s likely that its diet includes other aquatic invertebrates. We thought that it only inhabited the slower reaches of rivers and canals. Yet, it has now successfully colonised a fast flowing riffle on the Churnet with disturbing ease and appears to be wreaking havoc by feasting on the indigenous aquatic invertebrate community.”

Working with S&TC UK, Dr Nick Everall from Aquascience Consultancy and fellow ecologist, Nick Mott from Staffordshire Wildlife Trust, have reported some worrying evidence about the demon shrimp, Dikerogammarus haemobaphes, from a site in the River Churnet, a tributary of the Dove in Staffordshire. On the evidence from this site, the threat to native invertebrates could be significant.

Dr Everall explains, “The results from three-minute kick-sweep samples taken at one Churnet site on five occasions from January 2014 to October 2016 are stark. The demon shrimp population has boomed, rising from zero in 2014 to 442 in the October 2016 sample after it invaded in 2015.”

The sampling identified that the native freshwater shrimp, Gammarus pulex, has disappeared along with many other mayfly species, while stonefly and caddis have also suffered severe declines.

Plants, insects, fish, mammals and bird-life will suffer as a result of the loss of flylife, which plays a crucial role in the aquatic food chain. Basically, lose your flylife and you will lose many other important species too.

Dr Everall continues, “Other factors may be at work but it is hard to avoid the unpalatable truth that the demon shrimp has eaten many of the native aquatic invertebrates on this stretch of river. The potential threat from the spread of this invader is clear and it can quite rapidly have a profound impact on the balance of our whole aquatic ecosystem.  These are early indications but it is clear further monitoring and studies are urgently required on other rivers.”

It appears that the demon shrimp has been introduced into our rivers through the canal system and it is likely that it arrived from the Black Sea via Holland.  Dr Everall said, “To keep these invaders at bay, proper biosecurity is essential to slow and prevent their spread. Biosecurity is important at affected sites, but it is equally important for all other water bodies and for all water users. This will not only reduce the risk of introducing or spreading the demon shrimp, but other invasive species as well.”

Nick Measham from S&TC UK stresses how we need to be more vigilant about monitoring our precious river environments.  He said, “These results emphasise the importance of species benchmarking of our aquatic invertebrate populations. If Dr Nick Everall had not benchmarked the Churnet site before the demon shrimp appeared there would have been no way of observing its impact.  This fundamental “benchmarking” component of the S&TC UK’s Riverfly Census needs to be taken up by all who care for their rivers and is now available widely through the new River Invertebrate Identification and Monitoring (RIIM) courses run through S&TC UK. Without species level data on what was and what is now in our rivers, we cannot assist and force government departments responsible for our river environments to act.”

Help stop the spread of invasive plants and animals in British waters.

Invasive non-native species can have a damaging impact on British plants, animals and ecosystems – by spreading disease, competing for habitat and food and direct predation.

Plants that grow profusely can block waterways while some animals can damage riverbanks – so they also affect economic uses of our environment and add significant management costs.

As a water user, you may unknowingly be helping to spread invasive species from one water body to another in equipment, shoes and clothing.

Find out more about what you can do via the Check, Clean, Dry campaign page today.

Start typing to see results or hit ESC to close
salmon fly fishing chub roach pike
See all results
More Stories
Wind Farm Protest Blowing up a Storm
This website uses cookies to improve your experience. We'll assume you're ok with this, but you can opt-out if you wish.Accept Reject Read More
Cookies Policy