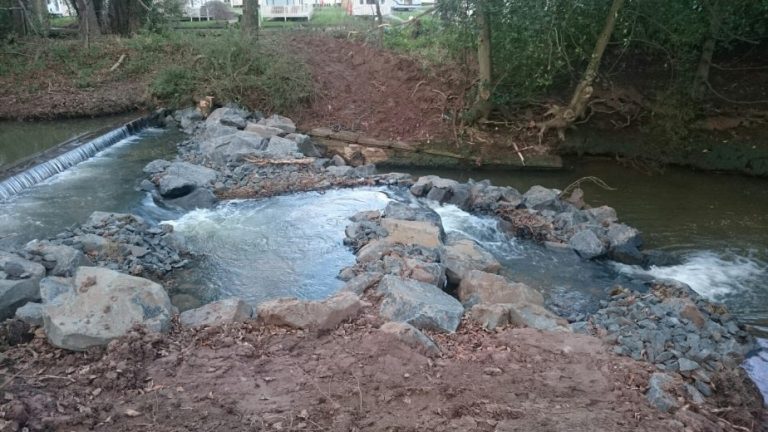 Two new fish passes on a Northumberland stream are giving salmon and sea trout easier access to 22km of watercourse.

The work by the Environment Agency and Northumberland Rivers Trust at South Low, in north Northumberland near Berwick, is making it easier for fish to migrate and spawn.

Two large weirs were preventing fish movement upstream, but both weirs have been changed to make it easier for sea trout and salmon to make their way to their spawning grounds.

It follows work to make it easier for fish to pass through Environment Agency tidal gates at the coast, where the sea meets the stream.

Since then, work has been taking place to make it easier for fish to move further upstream.

Robbie Stevenson, Fisheries Technical Officer with the Environment Agency, said: “We’ve worked closely with partners to carry out a lot of positive work in this area, to look at issues which might be having an impact on fish populations.

“The alterations to the weirs will open up 22km of watercourse for fish and make it far easier for them to travel upstream.

“We’ve worked really hard together with our partners over the years to make dramatic improvements to water quality.

“But there is always more we can do and this project at South Low is the sort of work which is taking place right across the North East and the country to protect and enhance our rivers and streams.”

The £100,000 project has been part funded by the Environment Agency, supplemented by private landowner contributions and the work carried out by volunteers.

Peter Kerr, Director of Northumberland Rivers Trust, who was also designer and project manager for this project, added: “We are delighted to have been able to add these two important fish passes by working in partnership.

“The contractors, WL Straughan and Son, did an excellent job in some challenging weather conditions, including the floods following Storm Angus.

“After we completed the lower of the passes we saw some big sea trout trying to get past the upper weir, so we are confident that the lower one works well and that there are many migratory fish trying to return to the South Low.

“The recent completion of the upper pass will now let these fish access many miles of spawning gravels.”