With Celestron Elements by your side, you’ll never get caught without light, heat, or power again. These tough, rechargeable, multi-function tools provide bright LED illumination, portable power to top off your smartphone, and heat up to 130 degrees. Choose the Elements product that’s right for your outdoor adventure, from the affordable ThermoTrek hand warmer to the 3-in-1 FireCel+ with all three features and a large-capacity battery.

Built with the outdoorsman in mind, Celestron Elements are rugged and lightweight. Plus, you’ll never have to repurchase single-use hand warmers or disposable batteries—just recharge with any USB charging port and you’re ready to go. Unlike chemical-based warmers, Celestron Elements provides scent-free heat, perfect for tracking wildlife. Celestron’s lithium ion battery technology is quality-tested to last for hundreds of charge cycles. When you purchase a Celestron Elements product, you can rely on top-notch outdoor performance backed by Celestron’s two-year warranty.

We trialled the ThermoTorch 5, the FireCel Mega 6 and the ThermoCharge 6. Firstly, all great names – they just sound like they are exactly what you will need for your adventures in the great outdoors! 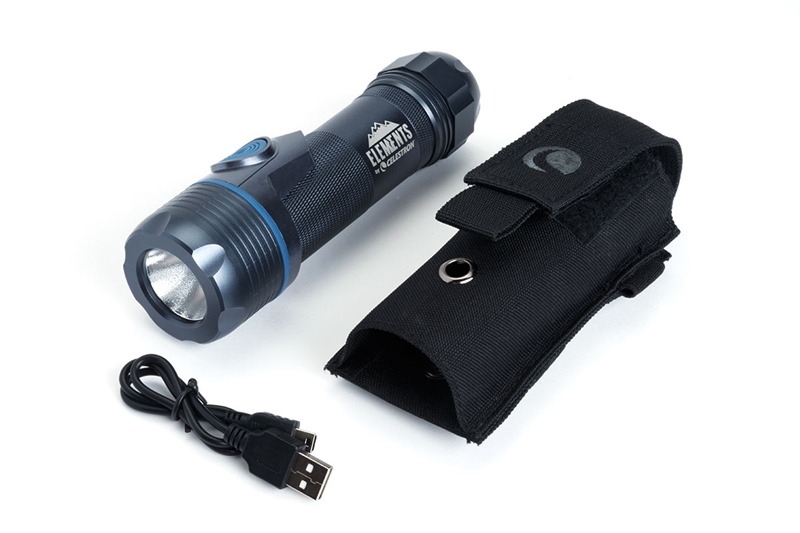 Combining the three main elements of power, heat and light in one ruggedly built tool, the Thermotorch 5 (£65) extends more focus on the light element in this particular package, with a very powerful torch powered by a 5 watt CREE® LED that has 3 power settings rated up to 300 lumens. I was able to use the brightest beam in particular to sweep around a field at ease in the dark so you are able to pick out items at a distance easily, and the lowest beam setting was more than adequate for general use about the house and garage for example.

The rugged finish is water resistant, dust proof and has also been designed to withstand being dropped by accident. With its handy belt holster it is the perfect accompaniment to a camping weekend or getting safely to and from a night session down the river after sea trout (just keep it turned off near the water or you’ll never sea another sea trout all night.)

The large easy-click button (perfect for gloves) cycles through the three torch power settings and back to off. If you hold the power button for a couple of seconds though it glows blue to indicate you have activated the heating element which warms up the body of the Thermotorch after a minute or so to act as a hand warmer that lasts for 6 hours at full charge. Great for warming up those cold wet hands on a frosty night.

Finally, unscrew the bottom cap of the ThermoTorch and you will find both the charger input socket as well as a USB output socket for your standard phone, camera and tablet cable for example.

The ThermoTorch is not light, but it is re-assuringly solid in the hand – you know it will be hard to break and unlikely to fail you when you need it. Carrying it on my belt though it was not particularly noticeable and at hand when I needed it. Because of the build quality it will also survive in a crowded fishing bag or backpack quite happily. 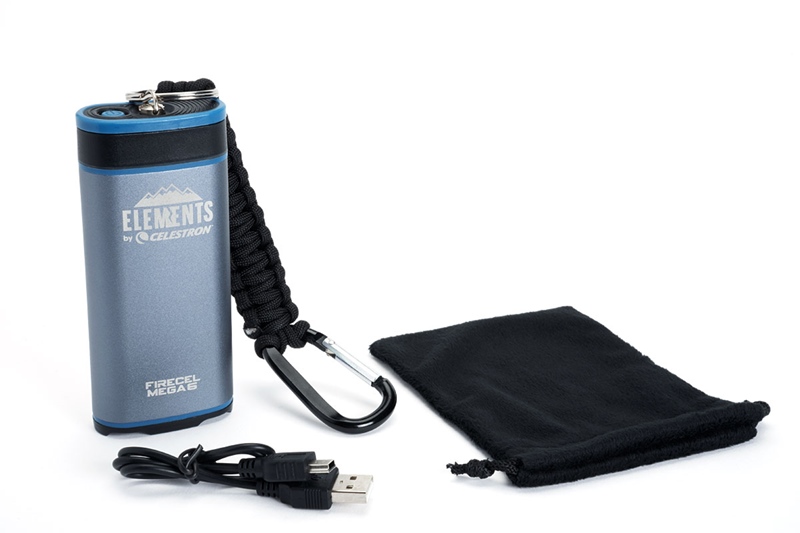 Still combining the three essential elements of light, power and heat, the FireCel Mega 6 (£49) is a much more compact package and the one I personally ended up using the most. The ergonomics of this, and the smaller ThermoCharge 6 I will come on to next, are much more designed around being comfortable in the hand, perfectly sized and shaped for use as a hand warmer.

The relatively small power button is recessed so it does not get switched on by accident but is a little tricky for larger fingers to operate I found. I had to use my finger tip and nail to switch it on rather than just the pad of my finger but that’s a small concern in the grand scheme and I got used to it. 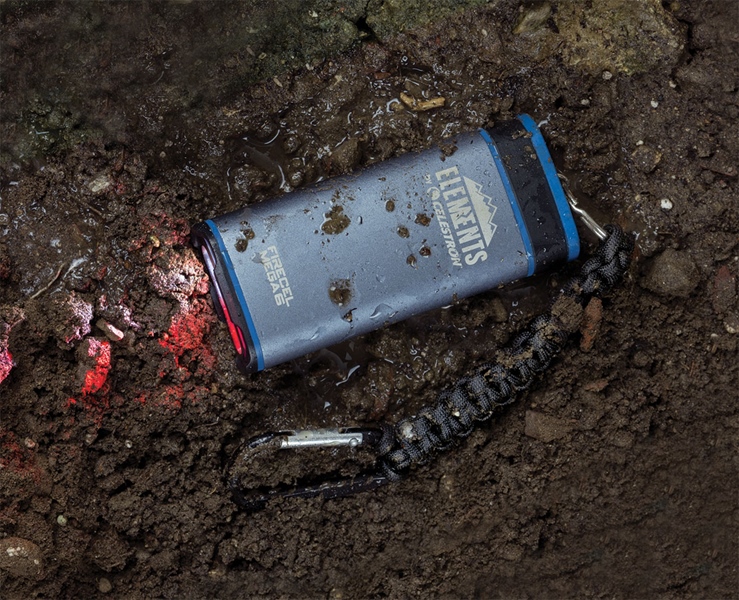 Again the FireCel Mega 6 had a nice solid feel to it with the torch element of this design standing out as quite different to the ThermoTorch. This has a 4-mode flashlight which switches between 2 white LEDs, 2 red LEDs (for better preservation of night vision – back to the sea trout adventures) all 4 LEDs and then an automatic flashing emergency SOS pattern – handy if you have an accident in the dark. The lighting elements are set back in the body and well-protected from being damaged by a drop by a recessed cover. 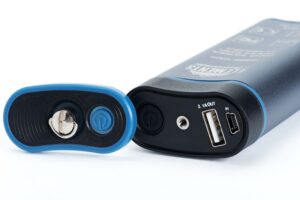 Next to the power button on top is a screw you undo to access the power points (flat head so you can use a coin to open it) with a flip-up fitting which you can also use with your fingers as a handle to open the top, and to attach the included paracord strap and carabiner so you can clip the FireCel Mega 6 securely to a strap, loop or buckle should you wish.

Because this tool is pocket-sized I found I carried it more often in my jacket in the colder months for its hand warming properties (again hold the power button for a couple of seconds) and Celestron say you should get up to 8 hours of warmth – I certainly used it all day on a couple of occasions and it was still warm, although not as hot as originally, by the end. 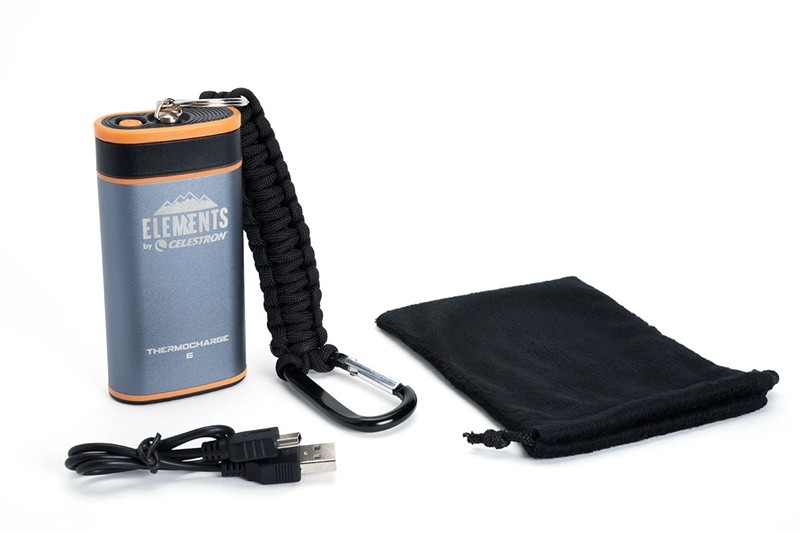 The ThermoCharge 6 (£39) is the smaller brethren of the FireCel, the main difference being it does not have a torch and so just acts as a power bank and hand warmer, still very useful if that is all you need. As with the FireCel, the ThermoCharge 6 lasts for up to 8 hours as a hand warmer and can easily re-charge your phone, tablet and other devices.

You can also link up with another Celestron power bank like the PowerTank GO (not tested) to extend the hand warming capabilities up to 16 hours if needed – useful if you are going to be away from a power source for recharging for a day or two. 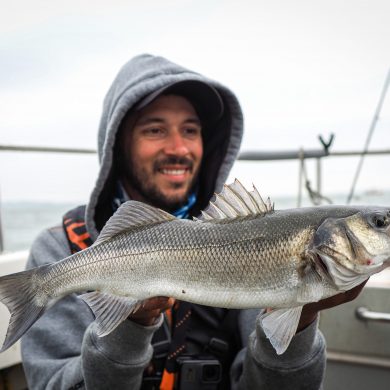