It feels like a turning point. As manager of the England rivers team, this is a relief, or a source of excitement at prospects to come. We have just had the River national final, from which next year’s river team has qualified. A River Ure in heavy spate provided enormously challenging conditions, particularly on the first day, when the river also carried a lot of colour. We were staring at the possibility of very few anglers catching anything at all. Such is the quality of the contemporary river competitor, however, that our fears were groundless.

The National Final is always fiercely competitive; an England river team place is seen by most as the Holy Grail in competitive fly fishing, in that there are just five places, plus a reserve, each year, and entirely by qualification rather than selection.

Right from the very first morning session, some competitors adjusted to the conditions and searched out a few fish. Stalwart Ure men told me that prior knowledge of the river was hardly material at this time and they had to adjust considerably to the conditions. A river in heavy flood is always unrecognisable to its normal, summer self.

By the end of the two first-day sessions, 20 of the competitors, out of a field of 32 finalists, had caught fish, including two magnificent catches of 10 by Gilliaum Vermeulen and eight by Fred Bainbridge, such that these two were leading the field into the second day.

Overnight the river fell a little and cleared a lot such that fish were on the surface from the start. Nymph still predominated for many, but there was some outstanding dry fly fishing taking place. Most notable here was Tom Speak (who blanked on the first day), catching 21 fish, mostly grayling, finishing with the second-most fish caught in the entire national and only narrowly missing team qualification – because of his first-day blank card. Tom, who fished for England in the Five Nations championship recently, and who this autumn gains his first loch-style England cap, is one of the several very strong hopes for the future of our international performance.

On the second day, the river behaved more predictably, and some of our most talented competitors fought back after the largely-disappointing results of day one. Scott Nellins for example, came in with a brilliant catch of 13 fish, and third place, to give him a chance at the team, in spite of catching only a single fish the day before. He actually finished just outside the team places. Other very good second day performances to follow on from blanks the day before were recorded by Simon Caddy, Tony Fox and Gavin Walsh, while Robbie Bell caught two magnificent trout, in his catch of seven, one of which was over 50cm, estimated at around four pounds in weight, and earned him the award for the biggest fish of the national final. Meanwhile, those who had caught well or reasonably on the first day, were realistically contesting for the team places.

Altogether it was hugely impressive. I have seen a lot of England teams come and go. I have seen great England performances and some not so great; all with mixed results. I have seen the stasis that England teams have recently been experiencing, while other nations have been catching up and overtaking. This year, I have seen numerous signs that we are now again on the ascendancy. This National Final has produced a very good team, full of obvious potential, and there is considerable back-up now, particularly in the rivers sector of our sport. Most impressive of all was National Champion, Fred Bainbridge, who simply pulverised the competition, showing, again, that he is one of England’s best (all-round) performers and as team manager I am delighted to have him back in the river team. I am also delighted to be able to welcome back Jonathan Barnes, as reserve. Jon is an outstanding dry fly fisher, and no slouch with the nymph (in fact some of his best results have come on rivers in colour). He is the perfect team player and his experience will be crucial to our team next year. We also have Ben Bangham, returning to the team for his second river cap. New caps are Gilliaum Vermeulen, Mark Harrison and Del Spry, who all produced consistent results over the four sessions of the National.

Collectively, these qualifiers inspire in me great confidence and I feel excited at the prospects of guiding the team towards the international, which is also on the Ure, next June. 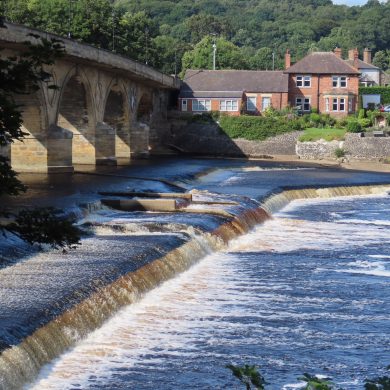