In accordance with the byelaws, all these fish were released to continue their journey to spawn in the upper reaches of the river this autumn, having spent at least three years at their feeding grounds in the north Atlantic.

Amongst the lucky anglers was Wayne Little, who caught an 11lb fish within ten minutes of starting his first ever salmon fishing trip. Barry Odger from Essex reported a salmon of 30lbs from Wyesham, Monmouth, caught after a late start on Sunday 7th April.

Meanwhile, father and son Lyn and Joe Cobley, both well-known Wye ghillies, both netted a fish over 30lbs on the same day for their anglers almost at the same time, even though they work 25 miles apart. Another lucky angler landed four fish in a single day, again the largest scaled 30lbs.

The news follows on from 2012’s encouraging results, when 1,272 were caught from the Wye. Against a national trend of declining salmon numbers, this represented a significant increase on the Wye’s five-year average catch.

Peter Gough of National Resources Wales said: “The re-appearance of a spring run of fish, including some large salmon, after what seems like a long period of near-absence is really good news. There are still many ongoing pressures that the fish must contend with, and which we must try to resolve.  In the meantime results like these with, we anticipate, more to come from the range of habitat and regulatory work completed by WUF, ourselves and other partners, are encouraging.”

Stephen Marsh-Smith, Director of the Wye and Usk Foundation said: “The Foundation and its partners have spent over a decade completing a variety of projects to restore the Wye and Usk salmon runs. Ten years ago just three Wye fish were caught in March and April and the season’s lowest ever total of 357 included very few large fish. It is extremely exciting to see the river starting to return to its former glory when it was famous for large spring salmon. This has a huge significance for the rural economy of south and mid Wales and also Herefordshire. We hope visitors will also return and once again enjoy staying in the traditional hotels and pubs of the Marches.”

The Wye & Usk Foundation (WUF) is a registered charity concerned with restoring the habitat, water quality and fisheries of the rivers Wye and Usk. For more information please see: www.wyeuskfoundation.org 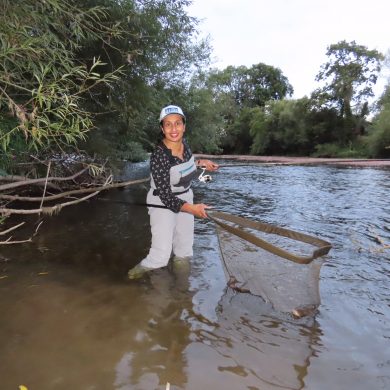