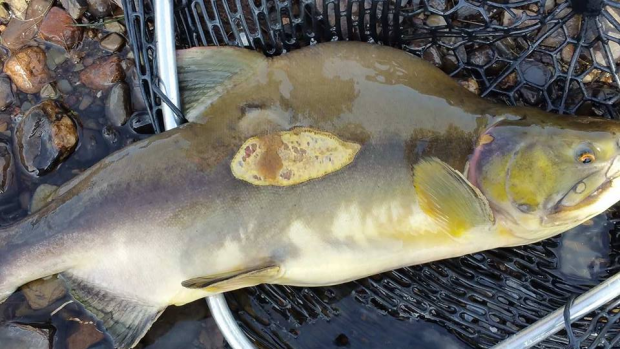 This pink salmon was caught by Tim Sharp in the Gander River last week.
Editor

Two recent cases of pink salmon being found in Newfoundland and Labrador rivers are most likely the result of a stocking program — just not one on this continent.

Instead, the pink salmon likely came across the Atlantic from Russia, according to Steve Sutton of the Atlantic Salmon Federation (ASF).

CBC was sent a photo of a pink salmon that was caught in the Gander River last week, and Sutton says another was caught  two weeks earlier in Cartwright, Labrador.

Pink salmon are native to regions around the Pacific Ocean and are rarely seen in this part of the world. They are distinguishable from Atlantic salmon because of their greenish colour and the fact that adult males have a large hump on their bodies not seen with their Atlantic cousins….

Start typing to see results or hit ESC to close
salmon fly fishing conservation Chris de Cani River Test
See all results
More Stories
End-game for salmon netting at Mudeford
This website uses cookies to improve your experience. We'll assume you're ok with this, but you can opt-out if you wish.Accept Reject Read More
Cookies Policy