Fun Games for Lovers of Fishing

In these days of easy to access online entertainment, fishermen and women can be forgiven the occasional foray into tech-based angling fun – particularly when there’s actually a surprising amount of it that’s basically made for them. There are gaming apps for just about every conceivable theme and activity these days, and that includes fishing. While there aren’t too many fly fishing games specifically yet, there are plenty of simple, fun little options that most people who like any form of fishing ought to enjoy. Perhaps you’ll play them next time you’re en route to a river or lake, or on a boat ride to a particular spot?

At any rate, here are a few fun games to consider…

Ridiculous Fishing
This is a very popular mobile game. It was designed by the indie studio Vlambeer, which is best known for an array of mobile titles that also includes Nuclear Throne, Super Crate Box, and GUN GODZ. It’s sort of an old school game in its design, but it’s beautifully made and ultimately incredibly entertaining. Your job is to control an old man on a fishing boat, casting a line and then tilting your device to guide the hook down into the sea, avoiding fish on the way down and then snagging as many as you can on the way up. Once you reach the surface with your catch, the fish are launched into the air and your job is to shoot as many of them out of the sky as you can (in a totally tame and not gruesome manner, mind you). As you go, you can buy various upgrades with the fake cash you earn from your catch. This is absolutely the best video game out there for fishermen, and as one reviewer is quoted saying on the game’s site, “one of the finest games of the App Store, ever.”

Reel Spinner
This is a simpler game but a surprisingly entertaining one, particularly if you already have a love of fishing. It’s also a little bit harder to track down, but you can read about it at a platform showcasing various titles in the casino, and specifically the slot arcade genre. Reel Spinner is just that – a slot arcade – and one in which a bunch of colorful and somewhat cartoonish fish take the place of the symbols you ordinarily see on the reels. Through this design, the effect is that you’re essentially casting a line with each spin, waiting to see what kind of catch you come up with, and, if you happen to be playing from somewhere that real money gaming is an option, what sort of prizes that catch may be worth. 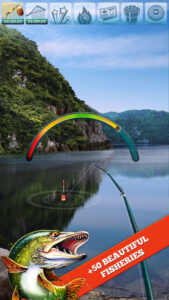 Let’s Fish
I maintain that Ridiculous Fishing is probably the best game on this list, but Let’s Fish is the most realistic. So if you’re a truly passionate fisherman and you’re looking for a beautiful simulation, rather than just a game with a related theme, this is probably the app for you. There are over 50 places to fish, and over 650 species to catch, all in wonderfully rendered detail. The controls are pretty intuitive, and yet it’s still a challenge to catch the bulk of the fish. It’s actually surprisingly addictive, probably even for those who don’t like to fish in real life

Odell Down Under
This one is a little bit of a reach, because it’s actually a very old PC game. But if you love fish and the sea, you might get a kick out of the online emulator, which is basically a browser version of the old game. Here, the challenge is not to fish, but rather to act as the fish hunting their own food! You can play in a sort of progression mode in which you start out as a “silver sprat” eating plankton and avoiding predators and gradually progress to control bigger and bigger fish. It’s a whole lot of fun once you get into it.

Start typing to see results or hit ESC to close
salmon fly fishing chub roach pike
See all results
More Stories
NASF salmon conservation auction in Norway raises a record £90,000!
This website uses cookies to improve your experience. We'll assume you're ok with this, but you can opt-out if you wish.Accept Reject Read More
Cookies Policy