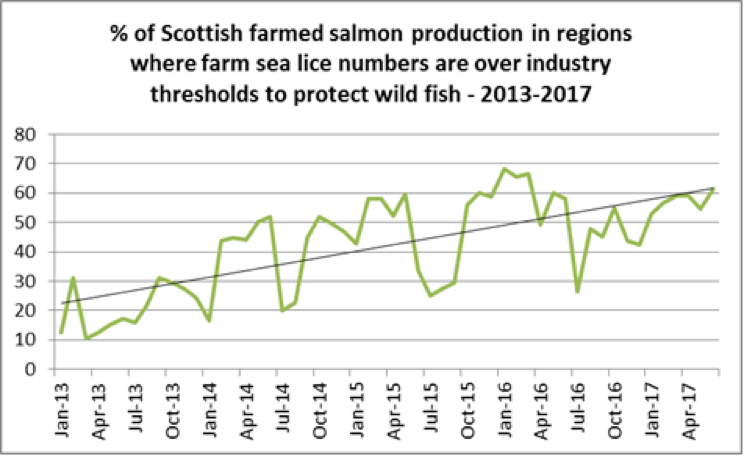 Late last year and this year, Salmon & Trout Conservation Scotland (S&TC Scotland) made a number of requests for information for details of those farms that had notified Marine Scotland that the new Scottish trigger levels, announced to the North Atlantic Salmon Conservation Organization in 2016, had been exceeded, but Scottish Ministers had declined to provide the information, on the basis that to do so would cause “substantial prejudice” to the interests of the fish farmers which had provided the information.

Scottish Ministers argued that the salmon farmers feared that information on the performance of individual fish farm sites could be used to undermine commercial contracts through undue media pressure, or to call for local authorities and other regulators to revoke consent for sites reporting higher sea lice levels. Scottish Ministers supported the industry in those fears.

After two separate and detailed referrals by us, the Scottish Information Commissioner has now ruled that arguments put forward by S&TC Scotland, for full disclosure of the names of the ‘liciest’ fish farms in Scotland, were correct, and that the Scottish Ministers had unlawfully tried to prevent public scrutiny.

“We are delighted that the Commissioner has made it so plain to Scottish Ministers that they cannot lawfully continue to shield the Scottish salmon farming industry from proper public scrutiny.

For years, we have been arguing that farm specific sea lice information should be made publicly available and, indeed, have been supported in that by local authorities on the west coast and in the Western Isles, and by the Scottish Environment Protection Agency.

It is to Scottish Ministers’ shame that it took a formal legal referral to the Scottish Information Commissioner from a conservation charity to make them recognise the obvious legitimate public interest in identifying poorly-run poorly-managed fish farms, so that consumers can avoid buying fish from those farms and those suppliers.

As soon as we have the information, S&TCS will publish the list of Scotland’s liciest salmon farms and will be asking supermarkets to stop selling salmon from those farms”.

Across the industry as a whole, the upward trend in failure of salmon farms to control sea lice and stay below the Code of Good Practice (CoGP) threshold of 1 or 0.5 adult female sea lice per farmed fish continues. The graph below, drawn up using SSPO data, shows that regions covering 61.4% of total farmed salmon production in Scotland were over CoGP thresholds in June 2017, the last month for which aggregated sea lice data has been published.

Even for that 1/3 or so of the industry that does remain below CoGP thresholds for sea lice, Marine Scotland scientists recognise “that adherence to the suggested criteria for treatment of sea lice stipulated in the industry CoGP may not necessarily prevent release of substantial numbers of lice from aquaculture installations”.

Parliamentary Inquiry due in early 2018

A formal Petition, at http://www.parliament.scot/GettingInvolved/Petitions/PE01598 , lodged in the Scottish Parliament in February 2016 by S&TC Scotland, seeking protection for wild salmonids from sea lice from Scottish salmon farms, has resulted in MSPs launching an Inquiry into the salmon farming industry in Scotland.

The Rural Economy and Connectivity Committee of MSPs agreed at Holyrood in July (at http://www.parliament.scot/parliamentarybusiness/report.aspx?r=11034), to conduct a full-blown Inquiry into salmon farming in Scotland and the issues raised in S&TC Scotland’s Petition.

We now call upon Scottish Ministers to rethink radically their approach to the salmon farming industry, to end the knee-jerk support of the industry in the face of frankly awful environmental performance, and to stop trying to protect it from legitimate criticism.

We have shared our ideas for change with Marine Scotland and hope Scottish Ministers will now work with environmental and conservation bodies to map out a sustainable future for the industry that no longer damages the precious Scottish marine environment and the species within it.

We also call upon the industry itself to end both its tobacco-industry style denials about the damage it causes and the ‘tit for tat’ accusations it repeatedly makes, in favour of embracing the positive change that must now come”.