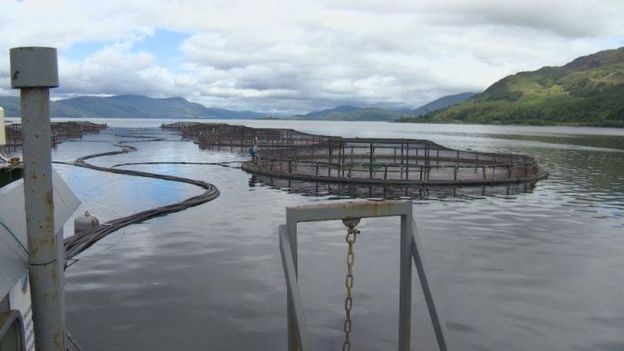 More than 300,000 salmon escaped from Scottish fish farms during last year, according to the annual official survey of aquaculture firms.

The year before, production fell 4.7%.

Much of this was due to infestations of sea lice, which force fish farm firms to bring forward harvest to a point before the fish have fully grown.

That meant the average weight of a harvested Scottish farmed salmon fell from 5.2kg in 2015 to 4.7kg last year.

The survey found the seven firms that dominate the industry expect to see a rise in production to 177,000 tonnes during 2017. That would be the highest figure since it peaked in 2014 at 179,000 tonnes, when it had risen by nearly 10%.

Inter-breeding concerns
They are optimistic that measures to tackle the problem of sea lice are beginning to turn around a major challenge for the industry.

These include bathing the fish in warm water, which can knock the lice off them, and using small fish that eat sea lice.

Escapes of fish from any of Scotland’s 248 farm sites should be reported by aquaculture firms.

Five such escapes were reported last year, with 311,000 fish going missing. Three other incidents were reported, which could have led to escapes.

They raise concerns that inter-breeding can harm wild stocks.

Other fish species are farmed in much smaller quantities. Rainbow trout production fell from its 2015 peak to 8,100 tonnes.

Only 80 tonnes of halibut was harvested, and 41 tonnes of brown or sea trout.

The industry is trying to produce more feeder fish which eat the sea lice. Production of wrasse has increased only very slowly, to 4 tonnes last year. Lumpsucker reached 10 tonnes in 2016, and is expected to rise steeply to 46 tonnes during 2017.

Meanwhile, direct employment in the industry rose last year by more than 100, to nearly 1,500.

The drop in production has been clear from financial reports issued by the big fish farming companies, while the strong rise in prices has helped them to very strong profitability.

Start typing to see results or hit ESC to close
salmon fly fishing chub roach pike
See all results
More Stories
Salmon Spawn in Petitcodiac
This website uses cookies to improve your experience. We'll assume you're ok with this, but you can opt-out if you wish.Accept Reject Read More
Cookies Policy