Fishing on the Frontier – Part 10

Dead-drifting in the Spring

After the floods that have characterised this winter, on every river I have fished, and the recent intensely cold nights, the waters are now flowing low and clear. San River is currently a 100m width of translucent, sparkling shallows, interspersed with lively rapids, while the Eden, here in Cumbria, is a sunshot glitter of upland waters. Grayling are, as always, becoming increasingly scarce as the spawning season approaches, though only last week I had a 48cm monster snatch at the Tup Wool Bug on only the fourth cast of the afternoon. This was on Appleby Water, of course; without a doubt the best mixed trout and grayling water on the entire system.

Trout on the other hand, though out of season until mid-March, are increasingly active. If the sun has been on the river for a few hours, the big wild browns of our waters will certainly be on the prowl for some early season fodder; cased caddis, or more likely the nymphs of the Large Dark Olives. I have even noticed a lot of midges hatching off from the gentler flows and the silty backwashes. Whatever invertebrates are active will be sufficient to bring the browns onto the feed, though this will also be of short duration. You will be lucky to have them active for more than an hour. Grayling might give you longer.

Dry fly opportunities are comparatively rare at this time of year. A really good approach is a team of small nymphs and spiders on a shortish leader (10′) with the flies spaced about 20″ apart. I have referred to the Tup Wool Bug earlier, and this is now standard on my cold water rigs for the middle dropper position in a 14 at this time of year. I like a hare’s fur bug, reasonably weighted with an underbody of lead, on the point, possibly as big as a 12 in a fair flow, but more usually a 14. On top dropper I most often have a spider pattern (such as the Snipe and Purple) or a Sawyer-style Pheasant Tail Nymph, either in a 14 or 16. With this sort of team you have pretty much everything covered for the spartan rivers of late winter and early spring. I make up this rig with fine fluorocarbon, at around 3lb breaking strain, and you can’t go wrong with Fulling Mill World Class or Greys Greylon, which are somewhere around 5X or 6X.

The crucial aspect of it all, however, is the presentation, as always. I have said it many times: a fly is just a fly, but given good presentation it becomes an effective fish catching device. At this time of year, that will mean dead slow, ideally dead-drifted. A short cast upstream (a long rod is useful for this – say a Streamflex 10′ #4) and across, with the rod tip held high and an upstream mend put in immediately to allow the flies to fall slowly through the column. As the flow bites at the drift, the flies will lift towards the surface, particularly when they are downstream of the angler and are swinging in bankwards. Try to keep this rising motion as slow as possible, even feeding out line – “dropping it back down the hole” as one of my team-mates puts it. A very slow lift can induce a take, but a rapid rise will only spook fish. Trout and grayling will not chase at this time of year, but trout, particularly, will follow.

The Switch cast I described in the last article is great for this method, because it is so efficient and so quickly places your flies upstream; but you can Snake roll or Spey cast if there are no bankside obstructions close behind you to ruin your D-loop formation. You cannot, however, use these casts to change the casting angle efficiently by much more than 90 degrees. Any greater than this and you are forcing it and the loss of efficiency leads to accidents – at best a clumsy touch down of the flies on the surface.

Incredibly, as Iain Barr reminded me, the European Championships are only about two and a half months away as I write this. We are each already trying to gear ourselves towards the requirements of this particular challenge. We know we will encounter ultra-clear mountain streams and lakes, with very spooky wild brown trout. The upper river Eden provides me with pretty good practice ground, because of the clear water following off the limestone and sandstone characterising this upland region of England. I am already adapting the rig described above to yield the set-up we will need under the bright skies of Cantabria in northern Spain. I will be dead-drifting a lot there, too, for super-wary trout, so three fly teams are out. I will most commonly be employing double nymph rigs and single nymph, down to size 20, on de-shined 6X nylon monofilament or copolymer.

The team used this approach in the crystal clear Alpine waters of Slovenia, in 2006, though we could usually get away with 16s and 14s there. The tactic was very similar to that described here, however, with the dead-drift prolonged and maximised, in order to acquire depth and a life-like presentation. I remember my session on the immense Sava, where I finished second on my session, all due to a Switch cast and a deeply, dead-drifted PTN on point. I was able to drop my point fly up to eight feet depth on this occasion, where I found grayling up to 47cm. Indication of a take under these circumstances is crucial. In International competition the use of indicators is exclusively barred, so we have had to develop other means of take detection. This will be the subject of a later article. 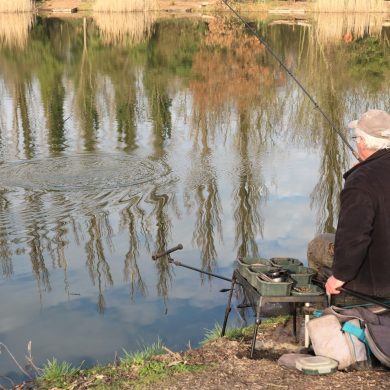