I said that I would write a piece about the complicated subject of take detection when nymph fishing, particularly on rivers. This is also a controversial subject. At its crudest, we can apply a strike indicator to the tip of the fly line, or somewhere along the leader. Every nymph fisher tries this, reverting to the ‘float fishing’ styles of bait anglers. It is however, much less subtle than float fishing. The brightly-coloured and bulky line-fastened indicators provide relatively poor indication, and without a doubt compromise presentation and also spook wary fish in clear water. Also, under FIPS-Mouche rules (Federation International Peche Sportive which governs the rules of World and European Fly Fishing Championships) the use of such indicators is specifically and rigorously barred. For these reasons, very few international flyfishers ever use such indicators, even outside the competition scene. There are better means of detecting takes when nymph fishing.

Classical upstream nymph and spider fishing, without indicator, is collectively probably the most difficult of all fly fishing disciplines. It can also, in consequence, be one of the most satisfying. The technique, with evolving means of take indication, is my subject here. Picture the situation: a clear water river with wild trout the targets, with variable flow (but ignoring the complications of bankside foliage or overhang). You can pitch a nymph, or a team of nymphs into trout holding water. If the water is clear, you might be able to see the fish, and its reaction to the fly. This is relatively simple, and relaxed, requiring no other form of take detection, though you might have the benefit of the sight of your leader or even the tip of the fly line draw away to confirm the take. Now, any colour, or turbulence, and the fish become invisible, and neither can you see the fly. It is very rare, even on English or French chalk streams, that we have the opportunity to observe both the trout and the fly, and thus have the luxury of ‘pure’ sight fishing. Elsewhere, in all other situations, we need help with take detection.

A greased leader butt and fly line tip is the first stage, and actually quite a big one, towards improved detection. My guests on the river are often very surprised at just how much difference this simple procedure makes. You need to use a thick grease such as Mucilin (ideally silicone), which smears thickly. A braided nylon connector loop between fly line and leader takes a lot of grease – compacted into the mesh – and lasts a hundred casts or more before further treatment.

Shortening the leader dramatically increases sensitivity. A fish picking up a nymph will soon register on the fly line tip if the leader is short. Stuart Crofts regularly uses tippets of just a few feet on a furled butt leader, giving an overall length of seven or eight feet. I increasingly employ a similarly short tippet section, water knotted to about five feet of tapered monofilament with a loop to loop attachment to a braided butt connection. The taper takes Mucilin very well, and if it is curled, or coiled slightly, so much the better. It is very easy to put coils into thick nylon (some people hate these and are frustrated by their appearance). If you pull the thick nylon under tension over a hard edge, the friction will distort the line and set in several coils. With Mucilin on them they stand out so obviously on the surface and act as a series of indicators, either diving away or sometimes stretching straight when a fish picks up the nymph. It takes a lot of practice to get the best out of this subtle indicator, but it is worth doing because it provides subtle and sensitive take detection.

A stage beyond this takes us into the province of French and Italian indicator leaders which all have the same basic structure, with variations. The original of these consisted of orange Stren (of 20 lb b.s.) set in a series of about eight coils. One end of this was looped to the fly line, while the other end was looped to the tippet of level copolymer. Finally, it provides a more developed and visible indicator coil like my leader described above. When greased, it looks like a spring, half submerged, which plunges, or straightens to an extent, when a fish takes the fly.

This is very sensitive and can be used for flies with reasonable ballast, say up to size 12 heavy wire hooks with underbodies of a layer of fine lead and perhaps a tungsten bead up to 2.4 mm. Heavier than this and problem of sinking the coils become difficult to control, and sensitivity drastically falls. We have been experimenting for several years now with variations of these indicator rigs, while always checking that they are acceptable under FIPS-Mouche rules (which is often far from clear).

There are other means that provide for good take detection, particularly the popular duo method (or New Zealand style of dry fly/nymph indicator rig), or the ‘bung’ method so over-used on stocked rainbow trout lakes throughout Britain. I will go into this subject in greater detail in future articles, though with leader construction, rigs and take detection, there is enough to fill a book. 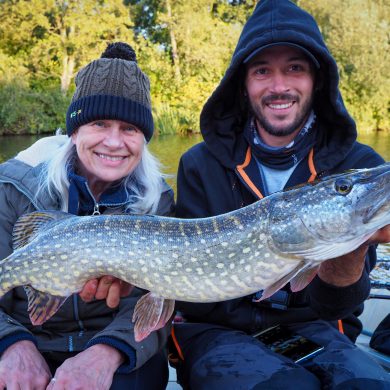