Fishing on the Frontier – Part 21

While never happier than wading my river hunting for wild trout and grayling, I have to admit that much of this stems from my long experience with this sort of fishing which has resulted in a certain level of comfort and confidence.  For much of the time I know what I am doing, understand my target fish and feel a great empathy with my surroundings.  I love these Cumbrian fells and the fresh waters that descend from them like no other place on Earth and I have become so familiar with the salmonids that live here, their ways and feeding behaviour, and how to present a fly to them.  Take me away from Eden and the surrounding plethora of lakes and becks, and I lose my comfort zone and I have to start working at it.  And nowadays, when presented with the prospects of rainbow trout, I have to work even harder, particularly with stocked rainbows in lakes.

Let’s face it; wild fish feeding in rivers or lakes, have what is largely a rational feeding behaviour.  Present a fly in the right place, with the right General Impression of Size and Shape (GISS), and if you have not spooked the fish (the difficult bit), then it will usually oblige.  This does not apply to a commercial rainbow trout fishery, and even (often) a large lake or reservoir containing stocked rainbows.  And if there is anything more challenging than the enigmatic summer grayling, then this is it.  In my fishing travels, I am always relieved to take with me my trout and grayling tactical approach, because it is always transferable in my experience, no matter what river or lake I am faced with.  Not so the rainbow trout fisheries.  Here is where the work starts and one needs to re-acclimatise.

I should explain.  Stocked rainbows break the rules.  Only when they are completely naturalised, which can take a whole year, do they adopt the behaviour of wild fish.  Moreover, rainbow trout behaviour has a lot of differences, most of them subtle, to that of brown trout.  For almost twenty years, rainbows were my ‘bread and butter’ fish, on places like Bewl, Grafham and Rutland, and I think I learned how to catch them pretty well, almost exclusively with loch-style drift fishing or bank fishing approaches with nymph and dry fly.  But then for at least the last 10 years I have been much more focused on rivers, or wild brown trout in lakes, only really concentrating on rainbows when England team duty called.  And I have fallen out of practice.  Stocked rainbows now make much less sense to my fishing approach than they used to do.  It shows too.

I recently fished in a couple of bank fishing qualifiers (CEFF Airflo Classic) and really struggled.  The first at Stocks just made no sense to me at all.  The signals out there pointed to buzzers pushed out into the head wind on a stealth line, but this secured me only two fish, though they were the two biggest fish of the day and, tellingly, probably last year’s residents.  The second was at Bessy Beck Trout Fishery when I actually caught seven trout which was probably enough to qualify me for the national final, though it was a real grind-it-out-and-scratch session.  I found myself really impressed by how so many of my fellow competitors seemed to adjust so quickly to the requirements of their particular section.  Everyone seemed to have set up the regulation three rods, all rigged differently, and changed between these in order to meet the requirements of the water in front of them.  It seems that the bank fishing discipline has almost reached the sophistication of the loch-style approach on still waters.  I set up with only two rigs, however: a stealth line with mini-lure on point and a Diawl Bach on a dropper, and similar (but smaller) on a very slow sinking intermediate.  In the very strong wind I had not considered dry fly or indicator dry (bung) techniques a possibility, but I was wrong.  I noticed several anglers exploiting the bung when the wind was from behind, with good effect.

When you are properly in tune with the fish and the fishing, you just know that the fish will take.  During the qualifier, however, there were several pegs when takes came as a surprise, or did not come at all.  Some years ago, when rainbow trout featured so much in my fishing, I would have been surprised not to get takes.  Somehow, by a mixture of good fortune and memory-skills, I converted enough of the takes to make the frame, but it really was a struggle.

Competitive fly fishing is a mastery of tactical abilities very finely tuned to specific situations.  This is actually consistent with all other sports.  If you fish less for any or all species, then confidence dwindles and you really are not engaged with the fish.  This is why we practise.  For the up and coming Spring international on Chew Valley, the England team is shortly having a squad weekend, when all team members, and our manager, Craig Barr, will be fishing.  Apart from any practise undertaken by team individuals leading up to the match, we will also fish as a team for up to a week before the international itself, on May 15th.  By that time, we will be back in tune with rainbows, specifically the nature of the fish in Chew, but few of us are up there just yet, with the exception probably of John Horsey and team captain Simon Gurney, for whom Chew is home water.

I think that fishing on the frontier has several meanings.  They include the frontier methods every bit as much as fishing in outland locations or international level.  These are the top methods that we have arrived at in our hugely subtle sport, for specific species in particular environments.  Without regular practice with any of them, we lose our skills set, and finally our ability to properly engage the fishing situation.  We drift off into the region of the also-rans and just know that we fall a long way short of what is possible out there.  Nothing wrong with this, of course, because pleasure and success in this fantastic sport are multi-faceted and they do not rely very much on the ultimate in performance, which is rather fortunate, for none of us can really live up there for very long.  We simply have to make do with achieving a glimpse, the merest contact, which is that electric take, out of the blue; so enormously exciting, particularly if it results in a rainbow going ballistic, as only rainbows can, and that long surge of power out over the deep water.

Yet even in these times of recession, there are huge positive developments in the sport.  The CEFF is currently in the process of coming within the umbrella of the Angling Trust as our governing body.  Part of the new relationship will be our drive towards both increasing participation in competitive fly fishing and to achieving higher standards for all taking part.  An academy for competitive fly fishing in England is even now in development, probably to be centred at Rutland Water, but with regionally placed schools all over the country.  This will afford a route for anyone interested in improving their fly fishing skills, specifically through the element of the competitive sport, with the help of a programme which fits an individual\’s requirements.  The academy will use top internationals and Game Angling Instructors Association (GAIA) guides, among others, to run courses and training/coaching events for groups and individuals.

In spite of nothing like the above ever having been in place before now, standards have been steadily increasing in the competitive sector, as alluded to above.  Participant numbers, however, have actually been falling in all three of the major discipline groups: bank still water, loch-style and river.  I believe the academy idea has enormous potential for reversing this trend.  I believe also that at the top end of competitive fly fishing, where we have a mere handful of all-rounders in England capable of consistent performance at the highest level, the academy, working with the youth and throughout anglers’ competitive careers, might achieve a much broader pool of international level anglers.  That, in any case, is the aim.  In my view it is a grand frontier. 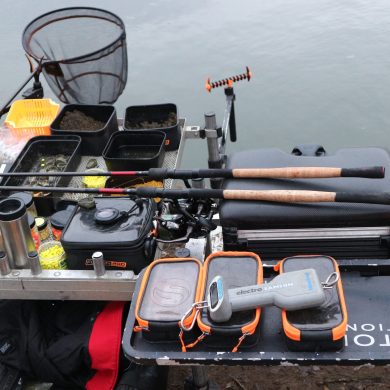