Fishing on the Frontier – Part 22

In a rough and tumble, helter skelter spring with a fly rod; from deep cold to deep drought, to storms and floods in May! And from the most perfect opportunities for upstream dry for wild trout snatching down the best hatch of March Browns I have ever witnessed in England, on Eden, to chasing rainbows very much looking upwards on Stocks, to catching a few of the best reservoir rainbows in the country, on Chew Valley Lake – and losing the spring international, big time! Sometimes, it seems like too much.

Eden has been magnificent, as it always is when there is sufficient rain to maintain flows.  It is miraculous, really, that in spite of the eutrophication resulting from the muck-spread run-off, and the hideous blankets of algae in slower, lower river sections, the invertebrates survive, and in many areas actually thrive.  Where else in England can we find healthy populations of March Browns and Iron Blues among a plethora of other ephemeroptera, quite apart from the staggering abundance and diversity of sedge species?

Times are changing for the better concerning the fate of the last of the English river systems.  Make no mistake, the situation is dire and it is almost too late.  Agricultural policy has been responsible for the extreme degradation of every river in England.  Added to this the problems of abstraction and drought, then the farm damage is compounded.  Drought need not be the acute problem it is, but with massive land drainage over the last 50 years (for agricultural purposes, of course) the catchments have virtually no water holding capacity anymore and the plentiful rain enjoyed in most regions of England, particularly the north-west, runs straight off to the sea, utterly wasted while also manifesting its flood damage.

Where is the sense in all this?  It is about decisions and policies.  We make these, for example when we vote.  It is always our choice.  We chose, all those years ago, to adopt the Common Agricultural Policy and subsidise European farming to the massive extent that we observe to this day.  The cost was catastrophic to the environment and to wildlife, in almost every case.  You can’t really blame the farm workers, making their living.  You might blame the farm owners and the stock owners – the very few making colossal profits from the sanctioned environmental vandalism – but then they are simply milking a rotten system (why does this ring a very loud bell among latter day political scandals?).  We, the majority, have allowed it to happen in the collective choices we have made.  And yet, I feel more positive now than at any time in recent years.

I have been working with the EA on a restoration project on an Eden upland beck.  This is a length of trout stream that effectively has been taken out of the agricultural equation.  The surrounding land has not been grazed for more than five years and no chemical or slurry has been spread.  It is very high up the system and with no dairy herd upstream, potential pollution risk is minimal.  Former agricultural activity, however, has damaged this beck, while drainage has ruined the water meadow habitat in the neighbouring fields.  Even after five years without grazing, however, numerous species of plant are returning and there is already considerable repopulation of various deciduous tree saplings.  We are going to have to do a lot of work restoring meanders, and the original series of pools and riffles, and the work will take several years to complete, though all we are doing is helping nature itself restore the site to its former glorious state, with a little kick-starting (mostly with the restoration of the meanders and the planting of willow and alder along the banks in order to prevent further erosion).  There are already trout in the beck and these will multiply and achieve their own proper population and age/size hierarchy levels once the habitat is repaired.  The Eden Rivers Trust will also re-introduce the protected, native white clawed crayfish to the beck.  A waterfall about half a mile downstream acts as a barrier to the invading signal crayfish should these ever infest the Eden system (they are currently absent).  This little area of beck should therefore be a safe refuge for the native crayfish and also for utterly wild Eden valley brown trout.

I write a lot about tactical fly fishing, I know; but even while enthusing about this particular passion, I catch myself yet more interested in the future of our sport in terms of the environment in which it is undertaken.  Conservation now comes a long way ahead of competition, for me, and this is entirely right, I think.  Without activity such as that above, we will soon only have artificial, stocked trout fishing in England, in essentially artificial or degraded environments.  And I do not think this will be enough to inspire enough of our young people to push out towards a frontier that is worth anything.  It is not that I think we have reached the limit with fly fishing potential with single-handed fly rod.  Indeed, I think we never will.  We are always just scratching the surface, no matter the level of experience we attain.  It is just that there are frontiers elsewhere, and they are all important.  Without them, we are just dabbling and there is no passion, and no hope for the future in the sport.  Fly fishing of all types depends so much on the greater circumstances of the environments in which we practice our art.  If we abandon those, which is the easy route, we will give it all up.

And I don’t think we will.  It is our choice, always. 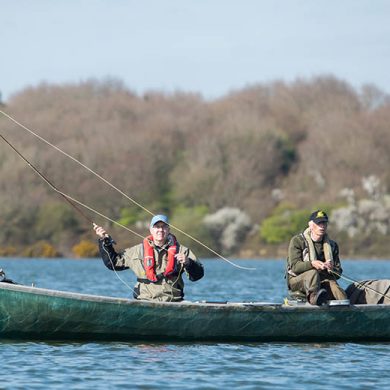