Fishing on the Frontier – Part 24

Someone I bumped into in Appleby was asking me about where and how best to fish the Eden. My immediate reply was: ‘In August, it is always going to be testy.’

I qualified this by saying that if Eden is ever going to give us real problems it is invariably this month that does it.  I mean, we can struggle in the depths of winter, but there is no month like August to yield consistently difficult fishing, for both trout and grayling.

So, I started talking about dry fly and downsizing, and very stealthy wading, about reading the water for subtle signs of feeding fish, of waiting for the moments when there is a hatch of pale wateries, or a spinner fall, of looking for the creases between the rapids and darker, slower water, where fish might be hiding, prowling the edge of the feed lanes.  Knowing that my friend was a relative beginner, however, I tried to be upbeat though I could imagine him struggling out there.  We all do: in August the river, or lake for that matter, will always challenge us.  I hinted that it would all be easier in September, but I don’t think that helped.

I think back at all those hot and humid days in high summer over the years, so often perplexed and frustrated.  On lakes it was often because of fish feeding deep, or perhaps on daphnia, snails or micro midge, even not feeding at all until the comparative abandon of an evening rise – which often did not materialise.  On rivers, the same long dearth of feeding activity through the dog days would be interrupted by very obvious feeding behaviour but apparent ignoring of each and every offering by the angler.  It happens so, so often, that we might think we are used to this by now.  Though we expect it, however, we never get used to it and so often leave the water irritated, frazzled by failure.

A couple of days ago I was fishing a stretch of the Appleby water.  A few fish were showing, but not as many as I expected in the rather kind conditions.  The only realistic chance was with dry fly and as I started fishing, having manoeuvred myself into a nice range and angle on a target fish, I was confident.  First cast was a little short, and maybe the next one too, but casting short seldom worries me – only a long cast, lining a fish, or putting leader over it, is usually fatal to presentation.  Third or fourth cast was perfect, and I tightened down, taking in the slack so that I was ready when the fish sucked down the CDC; but it didn’t.  Another two nice drifts and still the fish didn’t rise to fly.  I was perplexed.  Moving upstream towards a fresh target brought the ignominy of a nice confident rise from the original fish.  I tried again, this time with an across and down presentation.  This often works; a slight change of presentation with a confidently feeding fish, but it didn’t work this time.

I moved on, but the rising fish dwindled, and I was also running out of broken water.  Upstream was a rapid, strewn with water crowfoot, and beyond was the tail of a large pool and glide.  Fish were showing on the smooth water up on the lip and beyond out in the open water.  Approach of fish on a lip is always tricky.  They sit generally just upstream of the accelerating water, so a cast from downstream gives only limited control before drag sets in (because the angler is standing in water that is moving faster than that where the fish is feeding).  Approach using a downstream cast, i.e. from above the target fish, generally spooks it immediately.  In practice, we try to attain as square an angle as possible (which gives a reasonable period of dead drift), but it is seldom easy.  It was out of the question today; my only chance, I reasoned, was to wade up on the fish from below, stealing as much angle as possible.  It did not work.  All I seemed to do was to push the rising fish farther upstream.  I shudder to think how many fish I spooked, even with slow, careful wading.

Finally, after an hour I came away defeated.

When I returned a few days later, it was without any of the confidence I had felt on that former occasion.  Expectations were low.  August.  So was the river and it was nice, therefore, to see rising fish; not many of them, but on water where there was some pace, accelerated by ranunculus or gravel shallows.  The very first fish that I managed to have a clear chance at, gobbled the CDC.  It was a small trout, but very welcome.  A few metres upstream, again on broken water amidst a foam lane, another fish showed.  A shift of a few steps to my left gave me a good angle and, again, first cast brought the fish up – this time a 36cm grayling.  Having at least saved the blank (something that I still like to do) I relaxed and began to assess the situation.  Because I had to leave within the next 15 minutes I looked away downstream to where I had noticed a few promising rises on the way up.  I abandoned my upstream movement and dropped down, assessing the targets as I waded.  Two fish, which I thought were good grayling were showing fairly regularly close in to the bank and taking non-descript flies (in fact they were invisible).  More importantly, they were consistently rising and on water where I already had a good angle (square) and reasonable range (10 metres).

The nearest fish came to the fly, but I pricked it, trying to set the hook too quickly.  It did not spook the second fish however, which was a gorgeous 40 cm plus grayling (see photo above) that took the fly within a few centimetres of overhanging willow right by the bank.

That was enough, for sure: utterly satisfying within the fly fishing desperation that is August in low water conditions.  The point is, that the very best advice I can give is to search for the ‘easy water’.  I once said this to Paul Procter, after I had enjoyed a wonderful successful session on the San River.  I thought his reply salutary: ‘No, Jez, you chose the most appropriate water for these conditions.’  And that is the point.  Look at it like this: if you place yourself up there on the flat, where every movement sets off a tsunami of activity all around, you will spook everything.  Search for the lively water, a broken surface, with foam.  This is where the most catchable fish will be.  Fish dry, for sure, and ignore fish that have refused your fly a few times.  They are impossible fish that need to be rested and returned to when the conditions have changed. 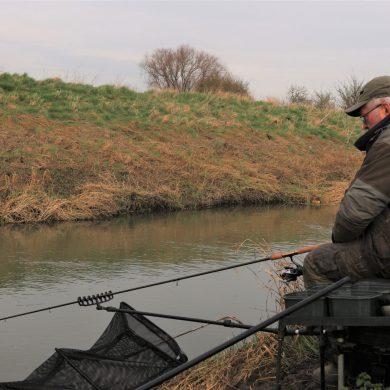