Fishing on the Frontier – Part 28

Having spent the weekend at the Spring show at Newark, meeting up with so many friends in this special introduction to the new trout fishing season, the wonders of the community of our sport continue to astonish me.

Fish and Fly’s Simon Young and Terry Lawton were there, the former awaiting surgery on kidney stones and the latter suffering ‘three colds in one’.  Charles Jardine was  giving his usual wonderful casting demos, with Midge, his black lab, in tow.  Iain Barr, current World Champion, my Barney, gave me a hug, and Stuart Wardle, the driving force of CEFF for so many years until standing down recently, chatted with me soberly about the current machinations of the political aspects of the sport.  Actually, Stuart, always so wise and measured, was finally reassuring, while John Ball and Ivy Wilkes told me that on Saturday they had enjoyed the ‘best ever’ day for CEFF stand sales at any show. Ian Greenwood, England World team manager, and 2010 team reserve, shook my hand and, considering that I had immediately before this enjoyed a long conversation about the worlds and the awesome San River with my old team mate John Tyzack, left me full of anticipation and a degree of excitement about this fast upcoming event.

Typically, I was overwhelmed by all the old friends I met at this show.    Steve Thornton and his team have really created excellence here, something to complement the more established British Fly Fair International at Trentham Gardens in November.  We now have these two shows, in spring and autumn, completely dedicated to fly fishing, attracting visitors from all over Britain, with ‘star attractions’, including from overseas, who provide outstanding value.

I seemed to be telling everyone that I am indeed retired from the competitive arena of our sport, and I think I am now pretty convincing, because essentially this is how it is.  I am, however, still involved with international competition in that I am coach for the Australian National Team for this year’s World Championship on the San River and will probably be international supervisor for the championship itself.  And beyond that; well it is difficult to look beyond this point in June, with – so far – 27 national teams entered for this landmark event on the wonderful San.  We just have to hope for good weather, because the San in June can be ‘all or nothing’.  There has been very heavy snowfall this winter in the Bieszczady mountains which is the San’s massive catchment.  In usual springs the snow melt tends to come through the system in April and May, but this year we suspect the spring is going to be late and if so we will have a swollen, turbid river system in June.  This could really ruin the championship.  The San is, primarily a dry fly river; probably the best dry fly fishing for mixed trout and grayling in Europe, on such a scale, though in semi flood conditions it is anything but.  It will become almost impossible to fish with dry (at least in a competitive sense), and much more a test of heavy nymph skills, which really will be such a shame.

Why, though, do I say this?  Why is the exhibition of nymph tactics a lesser show case of skills than dry fly?  Perhaps it is a subtle thing, but there is a modern trend in competitive circles on rivers, to use leader-only tactics (the so called French Leader).  This has usurped the Czech nymph approach, which itself revolutionised river fly fishing, and really any other nymph-based method.  With the right rig and tackle, it is deadly, particularly in low, clear water.  Unfortunately, however, almost every competitor you see is employing the method, to the detriment of exercising other skills, even in less appropriate water conditions.  Look at it like this: last autumn I was on the San with a group of friends, and the river was utterly perfect for dry fly.  On one day some French team members fished close to us.  Every one of them employed the leader-only tactic and methodically, almost mindlessly, fished through their section.  The dry fly actually significantly outperformed the nymph, because the fish were feeding so positively, but I found the French approach irritating, because it was simply the wrong method (though I suspect the result of team orders in what would have been a practice, reconnaissance session for them).  The point is, however, that in the way so many people were swept along in the Czech nymph fad, so we are observing a similar mindset towards French leader.  The major Championships are a real show case for our sport, and hugely influential in subtle ways.  It will be a travesty if the top results come from a collection of mono-technique methodologists, rather than hugely skilled anglers exercising their prowess with finely tuned dry fly, or demanding nymph techniques.

Consider that Team England has unarguably one of the finest dry fly fishers in the world in these championships: John Tyzack.  If the river is reasonable (not too high), both trout and grayling will voraciously feed off the surface.  French leader will, however, catch these fish as efficiently as dry fly, as well as fish lying deeper and more subdued in later sessions of the competition, and the dry fly, even in the hands of such a master as JT, might not be able to compete (over the rigorous, hugely demanding three hours of later sessions), and this will be a shame.

In any case, I suspect July is going to be better than June this year, for dry fly on the San.  I am hosting the Fish and Fly members’ group on 4th – 11th July and really looking forward to this, as I think the river will be at its best in a dry fly sense by then. 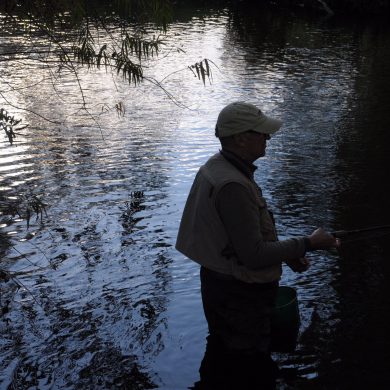