Fishing on the Frontier – Part 27

A Year to Remember

2009 might even be regarded as a vintage year, in my view. The bulk of my own fishing was on the Eden system, of course, with memorable sojourns elsewhere, particularly on the San River, in Poland.

Actually, I am still trying to come to terms with my last trip to the San, in October, because it left me almost at a loss for words in order to do it justice.  I have really never experienced mixed trout and grayling fishing to compare with what my friends and I encountered here last year.

It was a season, also, in which I made a decision which has been haunting me for some time now: I have finally decided to stand down from England team selection after all these years when it has been so close to my raison d’etre.  This has been a terribly tough decision.  Some friends have questioned my wisdom here.  After all, I can still make the frame, and indeed I feel that I have never been a better fly fisher than I am now, but deep inside I know I have made the right decision.  The trick will be not missing it, and at least not weakening and trying to make another come back!  Then again, I guess there will be one or two who will be glad to see me gone.

But there are wonderful England competitors out there now, younger and more competitive than I am.  When we reach a certain age, we really should have the plain sense, indeed the grace, to stand aside for others.  Simon Robinson, surely a World Champion in the making, must take up the chase.  John Tyzack is probably the most fearsome competitor in the river discipline anywhere in the world; Howard Croston is still a young man with simply enormous talent and potential.  Iain Barr, my Barney, already a World Champion (Scotland, this year), will certainly be back for more, on more challenging venues.  I only hope that the Confederation of English Fly Fishers (CEFF), the authority which selects and controls all England teams in internationals, has the strength in depth and sense to make the right decisions in the years ahead.  I am not happy with the direction followed by CEFF in the last few years, effectively side-lining people who should really be allies of the England Team cause, but I have no say in the machinations, and possible insufficient understanding of the drivers, in this organisation.  After all, I cannot understand the thinking behind CEFF in not asking me to coach the England team prior to the World Championships on the San next year; the San being a river I know better than anyone outside Poland; but there must be those who believe they can do better without my help.  The Australian national team, always so much fun and the best company on the circuit, have asked me to coach them and I am very much looking forward to this.

Tactical fly fishing, rather than purely competitive fly fishing, is what drives me personally, along with my love of conservation of freshwater habitats, particularly in the north-west where I live.  Readers of this column might be interested in the publication (at long last) of my book Tactical Fly Fishing (The Crowood Press).  You will find in these pages about my tactical approach to fly fishing for trout and grayling, though probably not my real passion – the preservation and recovery of the European wild trout and grayling rivers.  One of my reasons for stepping down from England team selection was a need to spend more time for this particular direction in my journey.  One man’s life is not long enough to do all the things he really needs to do.

I am left with thoughts about team selection, and England’s prognosis for the years ahead; but I know that in spite of, rather than because of, the selections, the team will be fine, principally because of those enormous talents we have.  I know them all, and I know, therefore, that the competitive arena of our beloved sport, although a very small part of the whole, will do just fine.  Finally, in all honesty, the talent on the frontier of our sport is so rich in any case that it all comes down to what each individual is able to do on the section of water that faces him on the day.  If you draw a bad section on a river then all you can do is save the blank.  If you draw a 30 plus peg, then you will make the frame.  One day you will get the luck, and apply your skill and knowledge; on another day it will just not work out to plan.  And there is little the individual can do to change this, even with the best preparation.  I know, because I have known both many times now; winning and losing internationals, big time; everything from blanking to what feels like walking on water!  Frankly, anyone who believes that they can do better than the odds in this particular game is betraying a lack of intelligence.  Yes, the French and the Czechs will be up there as the best teams in the world most consistently – for the time being – because they put the most into it, but even they, when they don’t get the run of the pegs, will be beaten.  It is as simple as that.

I can only cite my own experiences to illustrate this (though all my team-mates, even the charmed Barney, have been on both sides of the coin).  In internationals I have drawn river sections that, frankly, if I had not caught more fish than anyone else in the area I should not have been representing my country at that level.  I have also known the complete opposite, when the capture of a single trout or grayling to save the blank has been almost miraculous.  Sometimes I have saved the blank, and at other times I have known the most ignominious despair possible in the international sport: coming away from a championship session with a blank.  Either way, beyond any inherent skill one possesses, it has come down to luck.  I should add that the only really fair, balanced form of fly fishing competition is loch-style, when, finally, competitors choose where they go on a lake.

So, it is the tactical rather than the competitive approach which drives my own fishing, and really becomes so important to most of us as we mature through this extraordinary sport.  There is a conflict sometimes, as we wade aggressively over gravels that should not be subjected to the footfalls of anglers, but by and large, our rivers are only minimally damaged by anglers.  A good tactical fly fisher might catch a lot of trout and grayling, but actually does a lot less harm passing through than one who has less wading and watercraft skills.

Finally, in the closing days of what has been a remarkable fishing year, I will, if Fish & Fly members wish, continue to write about the tactical approach and what I consider to be fly fishing on the frontier, and I hope that we develop more interaction through the exciting times ahead. 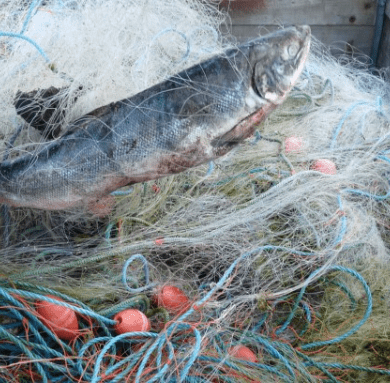 Save our salmon, bass, mullet & sea trout – help get the nets out of the Southern estuaries.
This website uses cookies to improve your experience. We'll assume you're ok with this, but you can opt-out if you wish.Accept Reject Read More
Cookies Policy