Watching Pascal, I saw him catch 30 grayling in an hour, from really rather challenging water, missing very few, all with barely moving his feet. I think he moved no more than ten metres downstream in this time. It was a revelation to me, actually, on several levels.

Firstly, the way he had ignored the water upstream, which would have been my first point of attack and attention, and probably still would be. Here is my classic, upstream presentation water, particularly when I have waded up above the sill where the water accelerates and would adversely affect the fly line and drag the fly. Then there was the sheer number of fish, very close to the angler, all catchable given the suitable presentation, from water that did not look as attractive, as holding water, as the water upstream. Of course, this was San River, with her unbelievable grayling population density; but, you know, I have found this on many other waters since that formative experience. The right sort of water on a grayling river anywhere in the world, definitely including British waters, can provide this sort of catch in a very small area. It is all a matter of appropriate presentation; finding the right angle on the fish such that you can offer perfect presentation. That so often means downstream. It means, also, the right rig, which is dominated by the right size and construction of fly, on a very long, fine leader. It is no different for trout, also, but we are usually talking about smaller numbers than those possible with massively shoaled grayling.

All too often, using a simple upstream presentation, we limit ourselves to the possibilities. We also move too quickly over the water, having, we think, exhausted the water up from us, so we move on, increasing the disturbance we make to the river. With a more 360 degree approach, and stealth in our movements, almost prowling the river, and adapting the leader and casting style appropriately, the potential of the water surrounding us escalates.

I will write more about the subtleties of presentation, at all angles, in due course, extending to the change of direction casts and presentations with nymph, but for now, as we ease into the late autumn fishing for grayling, just think about a varied angle of presentation during those last, fugitive hatches of Blue Winged Olives or Large Darks. If you find yourself, as you surely will, with grayling snatching the duns off the surface downstream of your position, rather than moving to get down below them, which costs precious time in these short-lived bouts of winter surface activity, just drop in an appropriate fly and very long leader immediately downstream of you and let it track down on the current. Remember to keep almost ‘tight’ to the fly, however, while minimising drag, so that you can hook the inevitable rises.

San River has redefined trout and grayling fishing for me, and for an increasing number of fly fishers. It is like the end of a journey. I will tell you all about the journey, the discoveries, and how they translate to rivers elsewhere; and I hope to see you here, on this massive, beautiful river on the edge of Eastern Europe.

If you are interested in fly-fishing expeditions to the San River, please visit Jeremy’s website at Pioneer Flyfishing and don’t forget to mention you saw this on Fish & Fly! 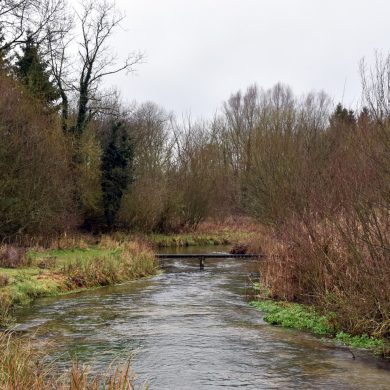