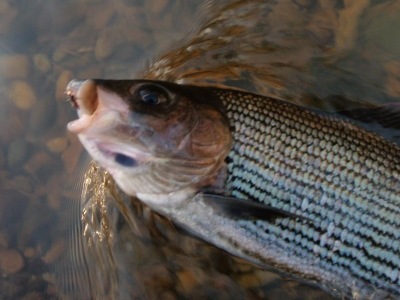 Fishing on the Frontier – Part 34

On a trout and grayling river, from November through to the rawness of late winter, you never quite know what to expect.

I have just been down to the river actually (Eden), fully expecting to fish trio method (double nymph under dry), which had been so successful earlier last week, only to find a reasonable hatch of BWO, with both trout and grayling rising to them.  This is simply wonderful in late November, and I had delight in changing from the trio rig to a single plume tip on a long leader (it was calm), and picking off rising fish.  It will not last long, however, because cold north-easterlies and snow are forecast within the next few days and this in turn will precipitate a return to trio, at best, or even deep nymphing.

A lot of anglers think of winter as a lean time, or even the period of the year when little fishing will be done and attention placed rather in tackle and fly preparation, or even shooting.  In truth, however, though the river is very different at this time of year, from the bounty of the summer months, there are still huge rewards to be had out there.  Mostly it is a lack of experience with winter fishing that puts so many off.  There are, after all, certain matters you need to deal with in order to make the best of what can be challenging, to say the least.

I have spent the last few days with short sessions on the river, as much to exercise our young springer pup, Elly, as to fish (though in truth, it is mostly to fish).  On each occasion I have set up with trio method, which is a double nymph rig, fished under a fairly buoyant dry fly, which is my Oppo (orange polypropylene posted paradun).  This method has been outstandingly effective and is certainly my ‘go to’ approach for the winter months.  You can be caught out, however, as I was on the weekend, when after starting with trio I noticed a few fish rising and BWO duns drifting down the feed lanes.  This in late November!  It did not take me long to switch to a single dry fly rig and put out a CdC plume tip (17).  The result was both trout and grayling rising as if this were late summer.

A lot of anglers make the mistake of thinking that trio is almost the same as duo fishing (single nymph under dry).  Actually the former is much more demanding of control.  Those two nymphs can give problems in casting and in presentation, as well as dealing with hooked fish etc.  Fished properly, however, trio has advantages over duo in faster and deeper water.  I strongly recommend that both nymphs are not heavily weighted, though in deeper water you might want the point fly (only) to be heavy enough to drop deep enough to find bottom-hugging grayling.  My standard trio rig consists of the above-mentioned and now quite well known Oppo, in a size 14, which is fairly buoyant, with two smallish – typically 14s – nymphs below.  The middle dropper, holding one of the nymphs, should be short.  The length between dry fly and point nymph is just over four feet, by default, though I often lengthen the tippet section by up to another two feet. You can fish deeper with trio than with duo, but don’t think you can get much deeper than four feet, possibly five, with the point fly.  If you are fishing that deep, with nymphs dense enough to get that deep with a short range cast, you are wasting your time having a dry fly on the top dropper, and you will moreover have very little control.  Much better then to fish a string of three nymphs, Czech-style, almost under the rod tip.

Two curiosities for you: yesterday I brought to hand a lovely grayling (40cm) which had taken both Czech-style PTNs – see photo.  I don’t know how it managed this, as I hit it the moment the Oppo twitched!  Today I caught two lovely grayling (40 cm+) exactly where I had seen a salmon jumping and where it rose to the Oppo (though I missed it).  Fascinating.