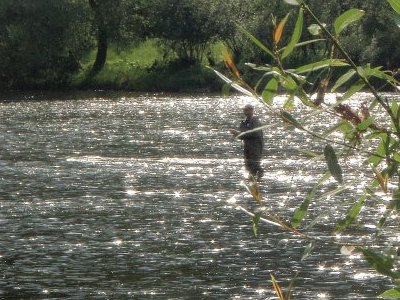 Hot and humid conditions at this years world championships in Poland - home to many fly fishing developments.
Jeremy Lucas

Fishing on the Frontier – Part 33

Jeremy Lucas reports on more cutting-edge developments bred from the world of competitive flyfishing. The French Leader technique involves no fly line coming off the reel at all!

Following on from the last Frontier piece, the Editor asked if I might update readers on the so called French Leader technique, to which I give the more generic and descriptive name of leader-to-hand. French leader is a specific form of this general approach to nymph fishing.  It was also probably the original form, though northern competition anglers Howard Croston and Paul Davison might justifiably argue the toss here, because they came up with braid nymph fishing (a highly specialised version of the method) around about the same time as the French were at least popularising their radical approach.

The common feature of this style of nymph fishing is that no fly line extends from the reel.  The leader is in the hand throughout the fishing process.  In braid nymphing, most of the leader consists of non-stretch braid – which produces a highly tactile and sensitive rig – while only the tippet, bearing the nymphs, is fluorocarbon.  The French, and many of the Continental anglers, went down the alternative path of using sight indication rather than tactile take detection, and so used thick (which is more comfortable in the hand) and tapered Nylon monofilament for the leader and concentrated on the indicator area and the tippet itself.  These two approaches are at opposite ends of the leader-to-hand spectrum.

The fundamental idea is to be able to present imitative nymphs exactly where they should be, in front of target fish, with the minimum of disturbance and maximum take sensitivity.  A long rod is absolutely crucial for the highest efficiency possible with this method.  While originally we made use of 10′ to 11′ rods for braid nymphing, and early attempts at the French leader, such cannot allow the optimum presentation and control required.  At 10′ you will get nowhere near the desired level of control. 11′ is just about reasonable, but to do the job properly you will need upwards of 11′ 6”, and preferably 12′ (FIPS-Mouche rulings in European and World Championships currently limit the rod length at 12′).  All the top European anglers are using custom made 12′ rods – see illustration.

Think of it like this: you will most usually be fishing the point nymph at between one and two rod lengths from the rod tip itself.  If you use a 10′ rod, the absolute maximum range from the rod tip is 20′, but in practice, nearer 14′ for fair control.  With a 12′ rod you really can have good control  upwards of 20′ between rod tip and point.  This can correspond to upwards of 30′ (around 10 metres) from where the angler is standing in the river, though in practice, again, you will do better shortening the range from this – where have I said that before?

Braid nymph is best in what we regard as a big water, with plenty of flow, so that a heavy nymph on point can bounce along the river bed while the dropper nymph(s) can be fished slowly down and across the stream.  Leader-to-hand, however, as most commonly practiced by top international competitors nowadays, is definitely best in a low, clear river.  Ideally, we need to be able to see more than a target area, but actually individual target fish, then to be able to ‘pitch’ the nymph (or maximum two nymphs) upstream of the fish so that by the time they have sunk to the feeding depth they are within a few centimetres of the fish’s mouth.  The very best of this method is being able to see the merest movement of a fish (usually to the side, or perhaps the flicker of white of the fish’s mouth opening and closing) which has indicated that it has intercepted the fly.  Often, though, we cannot see the fish, or the very slight movements which reveal that it has mouthed the fly.  We then rely on indications in the leader.  This is where the various coiled leaders came into being.  Like little, sensitive springs, they stretch slightly if a fish intercepts the fly.  Nowadays, I notice, most people dispense with greased coils and rather use a fluorescent section of level leader, right above the tippet.  In very clear water, where inevitably we find sensitive, spooky fish, I would strongly recommend dispensing with any bright colour near the fly (within 10′ at least), and rather use a dark section (stained with indelible marker pen).  At sub 10 metres range, this stands out remarkably well, and avoids spooking fish.

Good presentation involves wading technique (always, with any river method).  It is imperative that one can close the range sufficiently (sub 10 metres) until you can pitch the nymph(s) into the target area, upstream of the fish (visible or not) such that they drop immediately into the feeding zone, close to the river bed.  There should be no slack in the line, and none lying on the surface.  If the latter is not observed, you will have very little control.  Some anglers like just that amount of contact such that the flies are led very slightly through the water.  I prefer a dead-drift, with an occasional slight tightening in order to induce a take.  Honestly, the dead-drift is nearly always better accepted.  You will find that the rod tip is always held high, in order to hold the long leader off the surface.  You know that presentation is getting close to ideal if the leader does no more than intersect the surface at a pretty open angle, and then this intersection simply wanders downstream at the same rate as the current.  If it stops, or the indicator stops or moves atypically, then either a fish has taken the fly, or you have caught on weeds or the river bed.  It is surely extraordinary how often it is fish!

Leader-to-hand gives a measure of sensitivity, coupled with lack of disturbance, not possible with any other nymph method.  This is its great virtue.  It was heralded as a panacea method, of course, but it is very far from that.  Indeed, it requires a careful rig set-up and immense skill (with that long rod) and superb wading technique, in order to perform well.  While I once became fairly proficient with braid nymphing on big grayling rivers some years ago, and then dabbled with French leader set-ups when fishing thin European and Alpine rivers, I have on only two occasions worked with the leader-to-hand as described with anything like the desired level of expertise.  I have seen it performed, however, by a handful of Eastern and Western European anglers (every one of them a top international), to such a level, and I have been filled with admiration, possibly even humbled if I have not been able to catch fish in similar conditions (low water, bright weather) on my own fail-safe method of micro dry fly or micro duo.

Is it a worthwhile method, if not a panacea?  Certainly, but don’t be tempted to attempt to master this technique with a short rod, because it just does not work.  11′ should be seen as a minimum, though I have managed to make it work with a 10′ Streamflex (#4) in undisturbed water.  I remember one occasion on San, when two French National team members were practicing the method.  I steadfastly stuck to Duo or single-plume-tip dry and outperformed the French leader exponents, but I would put this down mostly to the prevailing conditions.  Given very low, clear water, then leader-to-hand is unbeatable, but it is not for everyone.  Frankly, I do not like the method, because it is not as versatile (for me) as either Duo of single dry, though in expert hands, it just might be.  So, if you’re fishing a championships in low water, for spooky fish, then this method just might put you in the frame, but if you’re out there engaging the ethos of the sport of fly fishing, on a wild river somewhere, then I wonder if there is a place for leader-to-hand.  You can be sure that if you see me out there on such a water, I’ll be fishing CdC dries in one form or another.  Then again I don’t fish FIPS Mouche anymore (competitively), so don’t need to do anything I don’t want to do!  It is your choice.  What I do not accept, however, is people knocking this method as being unsporting or somehow only for the blinkered and narrow-minded competitive anglers.  Trust me, this is a very difficult method to master.  I know of but a handful of true river experts who have indeed managed this.

For a leader-to-hand rig, try 20 lb bs level leader (which is just about comfortable on the fingers), all the way to the tippet section, which consists of a ~9′ taper (including the indicator section at the butt) down to three or four lb fluorocarbon tippet bearing the nymph(s).  Go for FM World Class, Rio or Hardy fluorocarbon; Frog Hair is good too.  Use three turn Water knots for any connections.  Don’t be tempted to fish three flies; you will have no control whatsoever beyond fishing under the rod tip.  One fly is great: two is workable.  Use small, dense nymphs.  The Continentals have a penchant for ceramic nymphs.  I use slim, dense PTNs, hare fur bugs, Tup Wool Bugs and River Devils (slim profile Diawl Bach style nymphs with 2.0mm tungsten beads) in small sizes (16 to 20).  I have seen the method used with fly sizes up to 12, in a big flow river such as the San.

Start typing to see results or hit ESC to close
salmon fly fishing chub roach pike
See all results
More Stories
Marijuana Could Wipe out Salmon…
This website uses cookies to improve your experience. We'll assume you're ok with this, but you can opt-out if you wish.Accept Reject Read More
Cookies Policy