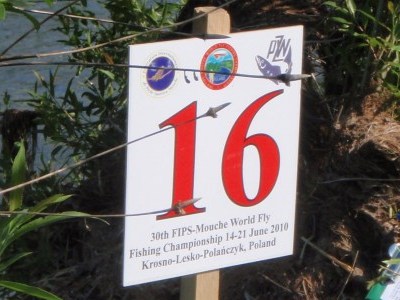 Fishing on the Frontier – Part 32

Observations from the World Championship

It was immensely edifying this year to be able to observe the World Championship, on such a magnificent river as the San.

It was a matter of being able to communicate with and observe closely some of the top competitors out there, before, during and after such a major event.

I was surprised, really, that the standard was so varied among the competitors and nations.  To some extent this was explicable by the fact that San River, while being an excellent trout fishery, is primarily a grayling venue, which considerably disadvantages the nations of the southern hemisphere, and even most other non-European teams.  But then, at such championships one does not expect to see such a contrast of abilities.  I observed everything from the outstanding, even breathtaking, to exhibitions that made you wince.  To some extent this was quite warming in that it represented one of the fundamental Olympic ideals of the importance of taking part, of competing, even if there is little chance of success.  Even so, to see many competitors stumbling through the river, attempting to cast (badly)as far as they could, demonstrated not only a lack of understanding of grayling, but of river fly fishing per se.  On the other hand it was sheer delight to see top competitors steal across the river making the angles and shortening the range on specific target areas or individual fish, presenting micro dries with precision.  Almost everyone in the top ten teams were able to do this, while among the remainder there were obviously some individuals who could manage the same, but more who simply could not and had no idea of wading technique and short range tactical fishing.

In this event there were two lake sectors (and three river sectors), both of them on Myczkowce, part of the massive Solina hydroelectric scheme that indirectly creates the awesome tail water of the San.  Frankly, this lake (or “pondage”, as the Australians referred to it) should never have been used in the World Championship.  28 nations did not travel all that way in order to fish a stocked lake (even if it had been as good as, say, Rutland or Bewl, which it most certainly is not).  The target fish were entirely recently stocked brown trout and the sessions proved only who had the necessary ‘stockie-bashing’ skills.  England’s John Horsey did brilliantly, of course, because he is such a top competitor, though it was the South Africans who stole the show here, every one of them taking away lake sector wins which pushed them right up the top 10 as a consequence.  This, coupled with their solid performances on the river sessions, revealed just how competitive a well-prepared team can be, even on radically different waters in fly fishing terms than they are used to back home.

Finally, it comes down to preparedness, a state of readiness for a big championship.  It was thus on the San, and so it is every time.  As individuals, each competitor must be honed in the necessary skills demanded by the venue, and also gelled into the team.  The latter is the hardest part.  People have said to me in the past that if you have five good individuals, with the necessary skills, then surely that is it; you can go out and win something?  Afraid not; only real teams can do this, and those teams consist not only of the five competitors taking part, but the reserves, manager, captain, and whatever support is behind that team, indeed an intrinsic part of it.  Get this all right – and this is a huge ask – then you can go out and win something.

It creates significant demands on the individual as part of the team.  It is also ridiculous when non competitors wax detrimentally about competitive fly fishing, or (worse) expound about technical aspects of the sport in areas where they have little expertise.  If they have not been out there, at this level, then they nothing meaningful to say about this sector of the sport  Think of it like this; we might see all the troubles of British politics or the financial system, but would we have the first idea of how to sort it out?  I am neither a politician nor a high level banker, so I have nothing to say, nothing significant to add, even if I observe that those experts in place have made a mess of things.  So too with our tiny little sport of competitive fly fishing.  There are lots of things wrong with it but if you haven’t been there, you cannot put them right.  I know several non-competitive anglers who are brilliant river fishers, but in the end, have they anything to add to the development of the river sport?  In the words of Tom Petty: “I just don’t care: what you got to say”.  We can all be quite good at it given our choice of where we fish, without other top anglers having recently fished there before us; but take away this luxury and how would these ‘experts’ manage a river session, competitive or otherwise?  I am talking about the frontier of our sport here, throughout this series, because this is my passion.  I no long compete, though I retain my enormous respect for those bold enough to do this, at such a level.  It really does take courage, fantastic skills, and that all-important preparedness.  Having the skills is simply not enough.  I think that this understanding is the best part of my observations on the San this year, beyond some of the brilliant individual performances I saw.  Coming away with the insight into the competitive mind, and the great teams out there.  We all came away having learnt so much, on what, finally, was a difficult river at the time.

I was, however, also fortunate enough to see ‘leader-to-hand’ or ‘French leader’, performed to the highest standard.  Now, I have always had a problem with this technique, ever since its genesis in the latter part of the last decade (from the international competitive scene, note).  Firstly, I had thought that it might be an overly destructive method in low water conditions, and secondly that it was applicable only to low water conditions.  I was incorrect on both counts.  Although it was certainly a minor tactic through the World Championship on San, most competitors from the top 10 teams gave the approach some river time, even during the flood conditions of the last session.  This technique allows the angler to place, with high precision, small nymphs exactly where the fish are.  It is hugely visual, being a short range presentation technique, often with sight of the fish, but always with minute movements of the leader indicating the gentle takes that this method is so good at registering.  All the Poland team fished a custom built 12′ rod for this, with similar leader (to hand) rigs, armed with two smallish, dense nymphs (14 and 16).  I also watched French and Portuguese competitors explore with the same approach, though with slightly shorter rods.  One or two of the Australian team , most notably and successfully, Jonathan Stagg and Joe Riley, also experimented early in the campaign with the general technique, but also with shorter rods.  The entire experience and series of observations led me to conclude that while this is an extraordinarily effective method, particularly in low, clear water, it requires at least as much skill in its execution as other possible appropriate methods (dry fly, duo, conventional double nymph or upstream spider) and we all noted that we considered that it rarely scored more heavily than those other methods.  Of course, given a river genius – and, in truth, there are so few of these – he will score heavily with the leader-to-hand; so will he with any of the above.  This is how it is. 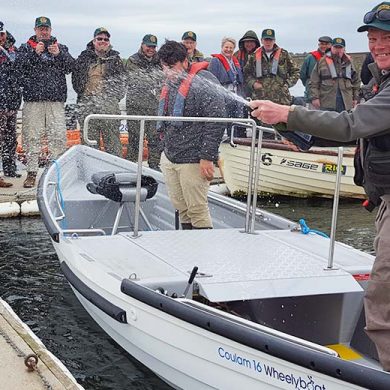