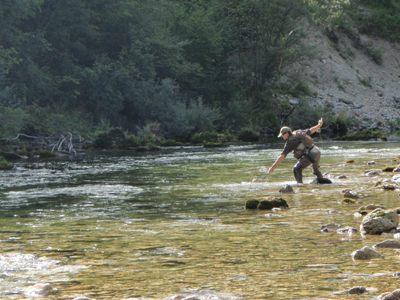 There are many frontiers in our sport, and there always will be, I suspect.  It is not so much that there are new places to discover, though there are.  High altitude trout and char fishing; high latitude explorations (friends of mine recently discovered trout and char fishing in high Arctic Norway that had probably never before been fished with fly); and surely salt water fly fishing is still developing apace, as well as freshwater fishing for non-salmonid species, which further opens the possibilities with a fly rod.  It is technique that interests me rather more than the above however, particularly in my passion for wild brown trout and grayling on European rivers, and it is here that there is now massive change.  Actually, the leader-to-hand – living without fly line – has changed everything.

The river sport has seen fundamental change recently, as significant, I suspect, as the still water approach radicalised by Arthur Cove in the 1970s and 1980s.  In Part 38 of this series, I discussed the tackle and something of the European ‘attitude’ that has brought us to this particular fly fishing frontier.  Throughout last summer, I spent a lot of time demonstrating the l-to-h technique on various European and British rivers and discovered rather more than I expected, both from the audience of fly fishers out there and of the range of possibilities open up by this approach.

It is worth repeating the fundamental tackle set-up, because this troubles a lot of anglers at the outset.  And this just has to be right, or considerable frustration will be the result. The long rod, with a designation of #2 or #3, is essential.  I have now found several rods that make the grade, and right at the top is the Greys Streamflex XF2 11′ #3.  Generally, the 10′ – 11′ rods of this line specification, are the most useful, but I have used rods as short as 9′ with this technique.  I was very surprised by the excellence of a Thomas and Thomas 9′ #3, a Hardy Marksman 9′ #3, and also a Loop 10′ #3, owned by friends of mine to whom I was demonstrating leader-to-hand.  Of course, these shorter rods lack the supreme control afforded by the 11′ rod, but they make up for this with excellent delicacy and comfort in use, particularly on the smaller scale of stream.

The reel and conventional fly line are almost redundant now, obsolete; but the former remains an aesthetically desirable part of the tackle (I adore my little Marksman, for its lightweight, simple elegance and reliability in function, which is all I ever demand in a reel), while the latter simply needs to be moved on towards the demands of the new fly fishing frontier of the leader-to-hand.  Put frankly, fly line manufacturers need to get away from the archaic ideas of the AFTM rating and conventional fly line presentation.  We have reached the limits of possibilities here, and need to move on.  We load fly rods differently now – in the single-handed fly rod river sport – we present flies in a fundamentally different way, and this has profound influence on the needs of the entire fly line/leader/tippet system: what is referred to as the leader-to-hand.

Right now, at the current stage of evolution of the river sport, we are using custom-built leaders and tippets that meet the sophisticated requirements of the modern nymph and dry fly angler.  Bespoke, off-the-shelf product is simply second best at the moment.  There is a proliferation of this, actually, from Camou and elsewhere; but the following describes the best of the state of the current art. We use a 12 metre length of ‘running/casting’ leader, which consists of 30lb Greys Copolymer.  This is connected by a tightly drawn two turn water knot (with tags cut flush to the knot) to a tapered copolymer leader (such as Fulling Mill, Hardy or Greys).  The tapered leader is shortened at each end so as to be roughly the same diameter as the 30 lb copolymer at the thicker end, and about 10lbs at the tippet end.  Overall, this section of the leader is between 1.2 and 1.4 metres (and it is not over-critical where in the range this falls).  Then we place a short (15-25cm) length of braided nylon monofilament, which is looped at each end.  This is 20lbs breaking strain, or thereabouts, colourless fly line backing material.  Don’t be tempted to use brightly coloured material at this point, particularly for dry fly fishing.  There will be the temptation, because of the extrapolation from the ‘French leader’, or indicator leader, style of nymph fishing.  With dry fly, and even with clear water nymph and spider fishing, you will spook fish if you use coloured material anywhere near the tippet section.  Finally, there is the tippet, which generally is between two and four metres of copolymer, between 0.08mm and 0.14mm.  Overall, from the junction of the leader with the fly line, or backing, to the point fly we have between 15 and 17.5 metres of leader.  If the junction between backing and leader is held in the hand, therefore, the point fly is being presented up to 17.5 metres from the rod hand, or, roughly, from where the angler is standing in the river.

Just take a good look at this.  On the river we can fish out at this range, with control, and this is astonishing.  With conventional fly line presentation I have long stressed the need for fishing at and within the 10 metre range, with dry fly or nymph, so that we can have some control over drag and presentation, and maintaining reasonable contact with the fly on an all-important ‘dead drift’.  And yet, with l-to-h, we have a new, extended range: presentation out to 17 plus metres.  This really is a quantum difference, almost a paradigm shift in what is possible, and acceptable, in terms of presentation in our sport; because at this range, with l-to-h, we really can have control over that crucial dead-drift.  But what makes this possible?

It is the construction of the leader itself, best presented on a long, very soft rod, such as the aforementioned Streamflex XF2.  This has defined the new frontier for the river trout and grayling specialist.  You will be surprised, even astonished.  Sometimes, still, I climb out of the river in a state of wonder.  How have I missed this, all these years?  Why was I so engrossed with the conventional approach with fly line?  Now, I watch the incredible 10 metre plus dead-drifts with the plume tip sitting out there on the ‘perfect drift’, because there is so little interaction between leader and surface currents.  Were all those years with fly line amounting to so much wasted time?  Perhaps not, because it was all a part of the evolutionary process of our esoteric sport; but it still makes me wonder.

And so we move on at the frontier, for this is what it is, and how it is, within the boundaries defined by our sport.  I suppose that it is up to us where those boundaries exist, and for some of you out there to question those boundaries, and extend them.  Believe me, leader-to-hand, yields a whole new frontier of possibilities. 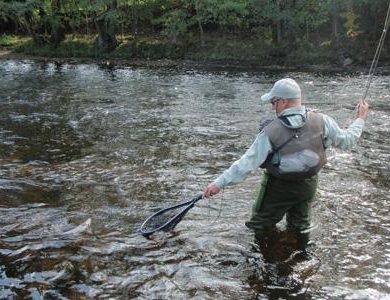 Fishing on the Frontier Part 51: Where is the Frontier Now?
This website uses cookies to improve your experience. We'll assume you're ok with this, but you can opt-out if you wish.Accept Reject Read More
Cookies Policy