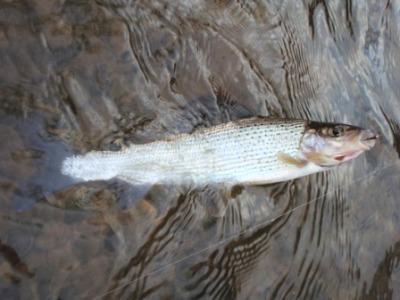 What a strange winter it has so far been; mild and stormy with many of our rivers unfishable for very long periods. Eden has been fishable only for about seven days in the last two months, even fairly high upstream, and this has been the pattern in most rivers in the north and west.

It has been frustrating for grayling fishers, some of whom enjoy their winter fishing more than any other through the year.  There have been highlights, on the southern chalk streams and the Dorset Frome, for example, but most of us have had a weather-dependant struggle.  It is cooling down a bit now, however, and the fells hereabouts are topped with frost and snow.  This will hold the waters back and we might soon see the grayling shoaling in their true winter fashion.  There are, after all, still two months to go before the new trout season.

The European grayling fishing is similarly temperamental, with many rivers being either extremely low or the opposite – and completely unfishable.  The San has been in the former category, with barely any precipitation since August.  My friend, Wojtek Gibinski, however, recently enjoyed a session on the upper San when he caught over a dozen fish (including two 40+cm grayling), all on dry fly.  While this is outstanding fishing in January, it is not uncommon to catch with dry fly on the San throughout the winter.  So too is this an under-rated approach on British rivers at this time of year.  I remember Stuart Crofts telling me that for a couple of years he determined to catch a grayling on dry fly in every month of the grayling season off the Yorkshire Don, and he achieved this, even during very cold periods.

Of course, faced with turbulent, big flows we cannot expect too many opportunities with dry fly, because in such there will be little if anything hatching.  Conditions have to be right, but when they are, then nymph and even spider can be the wrong approach and dry fly can be supreme.  Essentially, the river should be low and settled, with momentary warmth, such as the mid-day sun, or, conversely, heavy cloud cover from a warm front.  In combination with fairly calm conditions this will often kick off surprising invertebrate activity on the surface.  It still astonishes me to see so many upwings hatching in these cold months, but I have often observed blue winged olives in December and plenty of large and medium dark olives in January and February.  By far the most prevalent surface insect through the winter, however, is the midge.  Indeed, because of their dominance, they are usually more important food forms than anything else, and therefore far more important to the angler than most realise.  It is only comparatively recently that I made this discovery, such is the doctrine and conditioning within this winter occupation that the nymph is the only approach that can work.  It needs a few eye-openers to change the mind of the conservative English fly fisher!

So what are the signs that should hold our attention and drag us away from the nymphing ‘seams’ and gravel runs where we usually find winter grayling?  For me, slow revelation came from persisting too long in such areas, with nymph, and noticing small rises elsewhere, in calm, gravelly backwaters, or slow,  but typical, dry fly drift lanes, or up along the edge of died-back reed beds; all places where we might hunt in the summer for trout.  This is typical water where we find midges, of course, and quite a few of the silt-loving ephemerids, though not the fast water species such as March browns.  And it is just these species that the hungry winter grayling are targeting.  These are the slow, gentle rise forms that we observe.  It makes sense when we think about it – calm water with surface-bound, vulnerable flies; perfect for the efficiently feeding grayling.  Nonetheless, it is difficult to tear ourselves away from the traditionally productive water, and to change from the nymphs, but if we are to capitalise on this very common feeding behaviour, then change we must, both in terms of position and technique.

Nowadays, I yearn for the above conditions and actively search out those areas where I expect midges to be prevalent.  Ideally, I fish a presentation leader-to-hand, which does not involve any fly line – and immaculate presentation possibilities on calm water – or a #3 weight fly line with very long leader and tippet.  The latter is perhaps a little more versatile, and easier to master, but does not offer anything like the presentation potential of the former (with either nymph or dry fly).  Tippet diameter is optimally around 0.10mm and we are lucky enough to have several suitable products nowadays in the form of Fulling Mill and Hardy copolymer, Stroft and Frog Hair, all of which have performed about equally at the top of the broad selection available.  Just watch out for tippet material that is too shiny – there are several out there and they undoubtedly spook fish, particularly big grayling in calm water.

Which brings us to fly choice: a crucial component of the whole, but not really in terms of imitative qualities.  The fly’s size and how it sits on the surface are more significant features.  It must be small, typically around size 20, often smaller, and sparse so that it sits down in the film, preferably so that the hook point and bend sit below the surface with the shank area of the dressing in the film, and only the wing proud of the water.  River midges are very small, rarely larger than an 18 hook equivalent, though they are remarkably attractive to grayling.  It is worth observing feeding behaviour closely, because finally this gives clues as to the required presentation.  In typically fairly calm, shallow areas, the grayling will patrol, just like trout, rather than rest in a particular place (though be aware that big grayling will remain in precisely the same position if the food lane is well defined such that it concentrates the drift of midges). In all cases the rises are so typically efficient and delicate of this species; so much so that for years I suspected that these witnessed rises were actually small fish.  I find my CDC quill plume tips as effective for winter midge feeders as they are for the summer trout and grayling feeding on small upwings.  I dress these on size 21 TMC 103BLs (with and without split Coq de Leon tails), and on smaller Varivas midge hooks, down to 26; the latter without tails.  A great alternative is the F-fly style of CDC tied flat over the back, with a black wool, black feather fibre or stripped undyed peacock quill body, again in these small sizes.  The latter shows a great segmentation effect and has been very successful for these exacting winter grayling.

Whatever the presentation method, I strongly recommend a long (3m – 4m), degreased tippet down to 0.10mm or possibly 0.08mm copolymer.  It is essential, therefore, to present same on a soft actioned rig, ideally a #2 or #3 weight.  With anything less flexible you will suffer hook opening or, worse, tippet breaks.  My top choices for this, as for any river method other than streamer, are the Greys Streamflex XF2s in #3 specification, with the extendable XF2+ being the pick of the bunch as a travel rod.

Watch out for my new website, www.presentationflyfishing.com, which goes ‘live’ soon.  It is the intention that this becomes a valuable regular visiting area for all those trout and grayling anglers who are exploring the central tenet of presentation, which is probably the most rapidly developing area of the entire sport.  Presentation leaders, and details of their construction and use, can be obtained here, and also from FlyTek.

Start typing to see results or hit ESC to close
salmon fly fishing chub roach pike
See all results
More Stories
Alphonse Island News – End of the Season
This website uses cookies to improve your experience. We'll assume you're ok with this, but you can opt-out if you wish.Accept Reject Read More
Cookies Policy