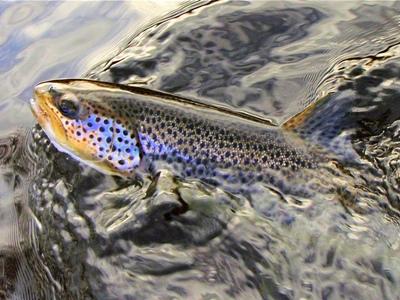 The concept and development of the leader to hand technique that Jeremy Lucas has been explaining over his past few columns has certainly stirred some debate both here on our forums and in the fly fishing magazines and social media. This month Jeremy explains further the casting style necessary with this new innovation.

There has been a lot of discussion recently about the casting issues of using leaders without any fly line.  Comments on the forums and elsewhere have prompted me to write the following, extending on from the ideas in earlier parts of the series.  Many observers have been locked into the idea that French leader constructions are what is meant by leader-to-hand.  Although I have said it several times, I obviously need to stress: they are not.  French leader is good only for nymph (including at a push, spider or ‘soft hackle’) presentation at short range (<8m).  In practice, French leader, or Euro nymphing as it has been coined, is usually superior in terms of presentation than fly line dependent methods.  Attempts to use a French leader for dry fly, however, particularly at longer range, can result in enormous frustration.  I know, because I toiled with this for years, even though I had been lucky enough to observe the evolutionary jumps in technique that some of the top Europeans were putting into this approach.

But why is this?  It has been pointed out that there is insufficient mass in a French leader in order for it to be cast on a standard four or three weight.  This is why these leaders have been developed specifically for using with nymphs, and thus incorporating the mass of the nymphs into the casting process.  And this is precisely why I set about designing a leader that could be cast without fly line, and without a weighted nymph.  Spending much of the summer and autumn on various European rivers soon focuses the mind on dry fly presentation, simply because the fish are looking to the surface most of the time.  This is where their food is most vulnerable.

I have so many memories of fish rising out of range (and this means, much beyond 10 metres, where control and contact – with fly line – significantly falls away because of interaction between the comparatively thick fly line and the water) and so having to wade up or across towards the target fish in order to close this range and make a better angle; finally to improve presentation and control.  But this is a little clumsy (can even be dangerous) and certainly increases the disturbance value.  Frankly, it does not feel good to the river angler, and it doesn’t look too elegant for the observer.

Influenced by some European competitors and also weight forward profile fly lines, while also understanding the physics of the problem, I reasoned that as much mass as possible needed to be reasonably far away from the rod tip.  We also needed a compromise: gaining sufficient mass, but avoiding that awful line sag between rod tip and point of contact of line with surface.  Too much mass in the running leader (close to the rod tip) produces this line sag, which also results in loss of control.  Experimenting with both fluorocarbon and copolymer led me to adopt the latter; specifically 0.47mm Greys copolymer as 12m of running leader, with 2m of a steep taper (0.55mm to 0.25mm; Fulling Mill copolymer tapered leader), terminating in a 20cm braided nylon monofilament section, looped at each end.  The tippet (between 1 and 4 metres) is added to this braid section.

As significant as the leader construction is the rod.  For several years I was locked into the Streamflex 10′ four weight, which was, and remains, a great all-rounder for river (including Euro nymphing) and even lake applications.  This rod is not suitable, however, for l-to-h and dry fly.  I’m afraid no four weight is.  We are much better off with three weights and even two weights.  I detailed some of the suitable rods last month so will not repeat them here apart from mentioning my current favourite, which is the Streamflex 10′ two weight.  There are several alternatives, so don’t worry about that, but all of them must be three weights or less, and there is no escape from this.

“It is only a matter of practice…”

I have recommended that anglers start by nymph fishing, preferably with low mass nymphs, getting used to the comparatively low mass extended from the rod tip.  Very quickly the rising fish from spring onwards will nudge you towards dry fly and I would suggest only that you don’t exchange an l-to-h rig for a fly line at this point.  If the leader is right, married to a suitable low line rated rod, then take the bold jump and learn to cast afresh.  It is really only an extension of the overhead, or side, casting, we learn with conventional fly line.  The stop points are the same, but the pause between both back and fore casts are longer, and the casting stoke between those stop points is faster.  This builds sufficient momentum into the leader construction to allow turnover, sublime touch-down and overall presentation, with subsequent control way beyond what is possible with fly line delivery.  We very quickly learn to cast the entire leader and tippet, giving us a maximum range of 18 metres (from the hand).  Perhaps obviously, it is best to start by casting across a gentle left to right wind (for a right handed caster).  A gentle following wind is almost as nice, particularly if it is upstream.  A facing wind is the most challenging, as with fly line.  It remains better to attempt to ‘steal’ an angle so as not to have to cast directly into the wind.  With any sort of facing wind, however, it pays to shorten the tippet down to a metre.  Also, you will find that coated in Mucilin (I strongly recommend this), the braided section has significant casting mass, rather like a weight forward line.  You will also find that it is actually easier to cast at longer than at shorter range, simply because there is then more casting mass.

It is only a matter of practice…  Again I urge those interested in exploring the presentation possibilities outlined here, that you do so with appropriate tackle.  Otherwise, there is the danger of misunderstanding the whole approach and abandoning it, which would be a terrible shame, because, believe me, it has changed the way I fish and has given me access to presentation that I had not thought possible at the outset.  Of course it is not suitable for every occasion on the river, and even less on still water; but you will be surprised at both its effectiveness and its elegance.

Start typing to see results or hit ESC to close
salmon fly fishing River Wye conservation grayling
See all results
More Stories
Could big-game fishing return to the UK?
This website uses cookies to improve your experience. We'll assume you're ok with this, but you can opt-out if you wish.Accept Reject Read More
Cookies Policy