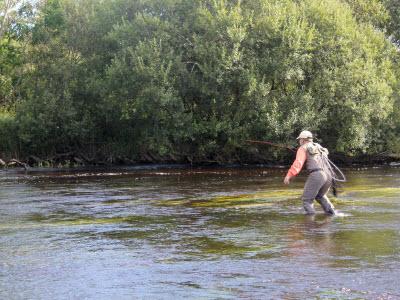 Fishing on the Frontier – Part 46: The Leader

The interest and development in leader-only techniques are accelerating rapidly. It has been the influence of the European river masters, stemming from the French, or Euro, leader nymph approach, as well as tenkara and the Italian pesca alla Valsesiana – both fixed line fly fishing styles – that have been responsible for extending our understanding of the key of presentation.

They have at last begun to take us beyond the limitations of conventional fly lines. The fixed line has demonstrated the sublime presentation possibilities that are possible, albeit at short range.  Usually there is no more than a short length of tippet lying on the water, and sometimes none at all, giving the CDC plume tip (the perfect tenkara dry fly) or reversed hackle spiders an incredibly life-like appearance, while keeping a very close contact to the rod tip.

Not that the fixed line is the answer to everything in the trout and grayling sector of the sport.  There are severe limitations, the most significant of which is the fact that line can neither be gathered (retrieved) nor yielded.  Very fine tippets must be used to protect the rod, and if a substantial trout is hooked tippet breakage is almost inevitable, which is irresponsible.  Also, using leader/tippet lengths substantially longer than the rod (typically 12′) when dealing with a fish towards the end of the fight requires hand-lining of the tippet itself, which is not only fraught with problems, but changes the most elegant approach ever thus far developed into something which is the opposite!  We can lengthen the rod, or shorten the leader and tippet down to the rod’s length, but then we become severely restricted on range.

This is where the western-style, incorporating a reel, or more precisely the rod guides, has the tremendous advantage over the fixed line, because we can retrieve or yield line to deal with a fish.  This is hugely significant in practice and it is, finally, a more responsible mode of fishing where larger fish are targeted, on river or lake.  On the other hand, there is the problem of the fly line, which, because it must rest on the water at any range beyond about six metres, gives us the presentation problems with both nymph and dry fly that I have discussed frequently, here and elsewhere.  There is, of course, the middle ground, stemming from the Euro leader or the leader-to-hand; collectively coming to be known as leader-only techniques, or just ‘the leader’, essentially without any fly line involved.

Last month I was on the Welsh Dee, a guest of the Corwen and District Angling Club.  It was a training weekend with me focused on the leader with dry fly, while Pavel Adamovski and Daniel Svrcek of the Czech Republic demonstrated the leader with nymph.  This is a superb model for forward thinking clubs interested in the frontier developments in river presentation and I am sure will be repeated and developed.  We are already planning a similar weekend on the Cumbrian Eden and a week long visit to Czech.  Dan is one of Europe’s top river nymph fishers and was a long-standing member of the outstanding Czech national team (which is the world’s number one team now, having usurped the French some years ago).  Pavel, also, is a first-rate nymph fisher.

Throughout the weekend there was a nasty, cold downstream wind and the expected pale watery and blue winged olive hatches were poor, restricted to a mere scatter in the early afternoons.  The weed growth at this time of year is superb and with the river fairly high, and stained, better nymph fishing than dry fly was expected.  In fact, both methods worked well, with dry fly probably having the edge with the larger grayling, though Dan did catch a magnificent 45cm specimen during one of his demonstrations.  The overwhelming point, however, was the core theme of presentation, made possible only with the specifically designed leaders that we were using.  In Dan’s and Pavel’s case this was a coloured, knotless Euro leader incorporating an indicator section and double nymph rig.  I focused on the presentation leader, described here in earlier articles, with the inevitable CDC plume tip, size 19 (on a Tiemco 103BL).  In all cases it was demonstrated that the presentation was demonstrably improved over what is possible with fly line.  The direct contact that is achievable with the nymph and the low interaction of leader with the water’s surface in the case of dry fly, both lead to the ability to prolong the dead-drift phase of the drift, with contact all the way, which is the single-most important feature of presentation.

The participants during the weekend were all committed river anglers, mostly with quite a lot of experience, though almost exclusively of the fly line orientated school.  In all cases by the end of the training sessions they were rising and catching grayling that simply would  have been very unlikely to be caught on such heavily fished water, and this was recognised by all.  This, indeed, is one of the many great benefits of fishing leader-only, in that disturbance is minimised.  Where fly line will decrease the productivity of a river section very rapidly, the leader has almost negligible effect.

The rate of development with the single-handed fly rod is moving at a more rapid pace than ever before, particularly on the river.  Both the fixed line and running line sectors are pushing the boundaries of what is possible. The leader-only approach is beginning to dominate in terms of success.  It is the ideal compromise.  I am spending the next two weeks with British groups on the San tail water, in Poland, and I am fired by the prospects of further discovery as we use the spectrum of approaches, fine-tuning the ideas of ‘presentation’ fly fishing which is the marriage of all the running line and fixed line techniques. 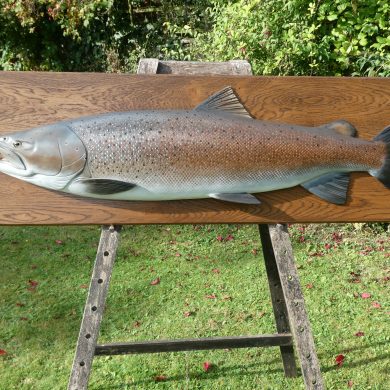