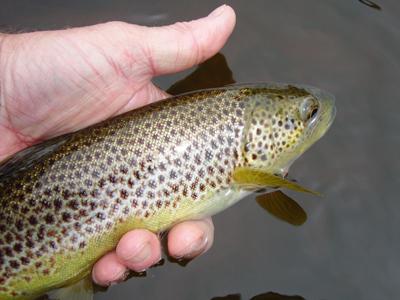 Fishing on the Frontier – Part 48: Euro-Style; A New Boundary State

The modern river fly fisher exists at a boundary state, right on the cusp of control. There is a vast difference between the angler who is just that tiny bit out of control, fishing over-range or without a ‘tight’ line, say, and the one who achieves the optimum in all the possible variables.

The casual observer cannot possibly see these differences, and only the angler himself, or perhaps a nearby, experienced observer, can really see this fugitive element of control, but it exists and is the single-most significant aspect of the sport that determines success or failure.  To be out of control, by even so little, results in compromised presentation, a poor hook up ratio and excessive disturbance, and much else besides.

In my experience many anglers are in denial of this attribute of control for much of the time, often attempting to cover up any inherent fault or lack with, for example, excellence in casting.  Indeed casting control is all part of it, but there is much more involved in achieving presentation with control.  As readers know, I have long suggested the shortcomings of conventional, high-mass fly lines and ill-conceived leader constructions.  Historically, these have developed with ease of casting in mind, which is natural, but I’m afraid this is merely the easiest aspect of the situation to correct.  The plain fact of the matter is that the more mass with which we hinder ourselves in order to make casting very easy, at range, the more presentation and control get away from us.  As you might remember, I put the outer limit of control on the river at somewhere around 10 metres; and this with a good quality fly line, say a DT 4 F – probably the de facto standard nowadays.  Any greater range and even the exceptionally good caster is losing control.  The dynamics of the fly line, quite apart from the rod length or leader construction, or casting ability, are what initiate this loss of control.

To be completely clear: control is defined as having such contact with the fly that it remains in its dead drift state unless there is any movement of the rod tip whatsoever.  This is what we refer to as being in contact with, or tight to, the fly.  Most river anglers usually have either too much contact, such that they are ‘leading’ nymphs, for example, or insufficient when they then have no tactile indication of a take to a nymph.  The situation is altogether more critical with dry fly, because overmuch contact leads to the anathema of drag, while too little leads to a loss of accuracy and a high disturbance value.

I mention the four weight above and it might seem counter-intuitive, at first, to suggest that to decrease the line mass – to a three or two weight – actually increases the range at which we have control.  It all comes down to the mass of the line/leader construction.  The lower this mass the greater range at which the angler can maintain control.  Lower diameters also help here, and it is noticeable how many top European anglers are now using low mass silk lines, such as AA format, in order to achieve this.  We all have experienced that awful loss of control as a heavy fly line interacts with the current.  In order to minimise this, the river angler often shortens the range to a typical six metres (using a 10’+ rod).  Czech-style nymphing has long been a method in which the fly line is obsolete, and Euro-style is merely an extension of this.

Tenkara has been popularised in the west because of its great virtue of superb presentation – with control – at short range, particularly with dry fly or near-surface flies such as spiders.  Another alternative that recovers some of this lost control is to abandon the fly line and go with a leader-only approach; something that I have been promoting for several years now.  The benefits to nymph fishing (and spider) are huge, but to dry fly, simply unprecedented levels of control and contact, with zero disturbance, are possible, even beyond the 10 metre limit described.

One important caveat: French leader is not the answer.  This is merely a condition of the Euro-style, specifically designed for nymph fishing, at various ranges.  French leaders are not designed for dry fly (and by extrapolation are not usually ideal for spider or low mass nymphs).  What are required are leader constructions in which the mass is distributed properly (away from the rod tip, rather like a weight forward profile fly line or some of the contemporary tenkara leaders).

So, the modern river angler is pushing out the boundary state at which we can achieve control, and it is nothing short of a delight.  We have borrowed a great deal from tenkara, and probably as much from early developments with French leader. Although it feels new, it is maybe all part of the sport’s development.  It is, at least, a delight to have stumbled upon new levels of elegance which are so extraordinarily effective.

In phase with all the above, is the way the fly has developed; really escaping fairly simplistic ideas of imitation, which had dominated for so long, and being more dynamically designed to meet presentation requirements.  In the river scene, quite unlike what we see broadcast from the still water scene, topical flies are beautiful exercises in minimalism in which we see the influence of dynamics, or behaviour in the water, as being the overriding influence.  So far as dry patterns are concerned, CDC is utterly dominant, particularly in the simple form I describe as plume tips, which are little more than (typically) a quill or heron herl body and a pair of CDC plume tips tied in shuttlecock, flat over the back or upright style, as suiting the prevalent food forms.

Variation in nymphs is more extreme, though the fundamental Sawyer-style PTN remains timeless, especially with the depth variations possible with tungsten beads.  Two newer styles of nymphs, however, are seemingly dominating the European scene.  Jig-style patterns have offered new opportunities in fishing deep, with control, largely afforded by the way the hook bend and point are inverted (significantly reducing fouling on the river bed).  The so-called Euro-jig is a variant that has stemmed from FIPS-Mouche championships – from the stable of several national teams – and consists of a 3 – 3.5 mm silver tungsten bead on suitable jig hook (12s and 14s being most popular), with Coq de Leon tail, stripped peacock quill body (natural, olive, yellow, orange and crimson have all been successful) and mix of dubbed hare or squirrel fur with CDC at the thorax.

The other group of flies that are having as profound effect on the river sport, again throughout Europe, as did Czech nymphs in the early days, are ceramics.  These slim profile, dense patterns have been astonishingly effective, ever since the French introduced them about a decade ago, though surprisingly few anglers from other countries paid much attention to them for several years, and it has been only very recently that British anglers have discovered them.  I think they will make as much long-term impact on the sport as either Czech nymphs or tungsten beaded nymphs.  It all has to do with that element of control, and how a rapidly sinking pattern such as a ceramic – incidentally, with excellent GISS profile almost by default – can be held with precision through a drift.

It has been a convergence of approaches, nymph and dry, that has led us to the delightful minimalism of what is regarded as Euro-style.  We apply this to winter grayling, or deep nymphing, double nymphing, or clear water nymphing with a single ceramic to targeted fish in clear summer waters, or spider fishing.  Then, at its best, we discover that fishing leader-only we can also have unprecedented levels of presentation and control with dry fly, all with the same tackle; a 10’ two or three weight and ultra-long leader that can allow delicate touch down, with accuracy and zero disturbance, and if necessary, way out beyond the fly line-imposed limit of 10 metres.

Start typing to see results or hit ESC to close
salmon fly fishing chub roach pike
See all results
More Stories
Half Price Hardy SALE – Now On at Farlows
This website uses cookies to improve your experience. We'll assume you're ok with this, but you can opt-out if you wish.Accept Reject Read More
Cookies Policy