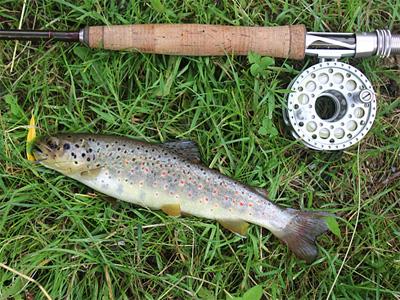 A beautiful wild trout from an Alpine river on the XF2+ three weight, and plume tip.
Jeremy Lucas

In a landmark part 50 of his ‘Fishing on the Frontier’ series Jeremy Lucas looks at the efficacy of the ‘gentle touch’ when it comes to lines and leaders and the pursuit of wild fish in undamaged rivers.

My fishing this spring and summer has been unusual, at least for me.

It has not really been about numbers, or indeed a quest for large trout and grayling, it has been more to do with consolidation of an approach, with ultra-light line or leader-only; mostly with dry fly.  As such, I have chosen my water even more carefully than usual, picking out those rivers, or more precisely areas of river, which have most suited my approach and best shown off the efficacy of the presentation-based approach.

Other than a week in Slovenia with some friends my catches have mostly been of low numbers, although memorable, and they have certainly secured my faith in the finesse that the modern European river fly fisher has developed.

Indeed, I am at wonder at both the versatility and effectiveness of the light line approach we have today, recognising benefits with both nymph and dry fly over conventional fly line approach (which, to be clear, might be considered anything heavier than a three weight).  For the ultimate in presentation, even a two weight fly line can be rather indelicate, though the right leader system, and connectivity throughout, makes a profound beneficial difference.
One of my most exploited systems is a Hardy Premium double taper two weight, tipped with a 45cm to 60cm furled horsehair butt, which is level and connected loop to loop directly to the tippet section. The latter is usually a two metre plus level tippet (for which I invariably use the outstanding Fulling Mill copolymer Xtra in 5X, 6X or 7X) to the dry fly, or the same incorporating a single dropper (attached via a three turn Water knot) to accommodate a duo, double nymph or spider/nymph rig.

It is delightfully simple and in all cases allows the most delicate touch down and overall presentation, beaten only by a leader-only rig.  The only real variable to consider beyond that of tippet diameter is the length of tippet. I usually make this as long as the prevalent conditions will allow. The biggest problem, as with all dry fly fishing, is a strong downstream wind, which will necessitate either an across or downwind presentation, or a short tippet.  No-one, even with a heavy line weight such as a five weight, can turn over a long tippet with a small CDC dry fly, into the wind.  To attempt such will result in the fly touching down close to the fly line, with ruined presentation.  It is, finally, bad fishing practice.  It is much better to shorten the tippet and/or to steal an angle on the target fish or area so that one can at least cast across wind.

Although there are an increasing number of good fly rods out there for the evermore delicate approach of the river angler, my own favourite is the Greys Streamflex XF2 10′ two weight.  For me, this is the best river rod ever made and I think it will achieve ‘cult status’ in the tiny scheme of things within our sport.

A great second choice is the XF2+ three weight, which has an extending option (from 9′ 6” to 10′), and is a marvellous travel rod.  10′ is the ideal ‘compromise’ length; not too unwieldy in four sections to be a travel burden, and allowing sufficient control with either dry fly or nymph with low mass fly lines out to the all-important 10 metre range.

A leader rig is often substituted for the fly line, particularly for very spooky fish such as the wild trout of the chalk streams of northern France, or in the dazzlingly clear rivers of Slovenia, because a leader will always beat any fly line for the minimum disturbance approach we seek.  We can simplify matters even further by adopting the fixed line, or tenkara, approach, and the discovery of this has been a delight to many western-style anglers, though there are limitations mostly associated with range constraints and the immensely annoying need to grasp the tippet in order to net a fish, or bring it to hand.

For me, as for so many fly fishers with whom I have shared river time, the CDC plume tip almost defines the entire presentation-based approach, more so than even the very light fly line or leader rig.  The plume tip, itself an evolution within the dry fly tying (incorporating CDC) process, is now a generic term for the delightful (in my view completely unbeatable) presentation of surface bound flies representing so many target species for both trout and grayling, particularly the upwings.  As the various forms of pheasant tail nymph defined the radical and revolutionary approaches of both Frank Sawyer and Arthur Cove in nymph fishing, so the plume tip defines mine with river dry fly.

So, we have come full circle really, or at least a very long way, in this series of articles because it was initiated and inspired by an exploration of the presentation-based approach that (mostly) European river fishers have developed, and finally we have nudged right up against the frontier of possibilities, which, after all, was our intention.  It will continue to evolve, of course, and therefore a spiral might be a better metaphor than a circle, ever-closing inwards towards some sought-after, central point which is perfect presentation.
At the start of my fly fishing life, almost 50 years ago, I think we river fly fishers existed somewhere out on the crude edge of the spiral, and we have indeed come a long way towards the focal point, much more so, I suggest, than the still water fly fisher.  For me, the two weight with a leader or low mass fly line, tipped with horsehair, fine tippet and plume tip, along with the accompanying techniques to properly use these, come as close to this point, the sporting frontier, as I can imagine or have experienced.

We will, however, be constrained in this development, not so much by our proximity to this frontier – after all, frontiers shift – but by the existence of this sector of the sport itself, by which I mean the pursuit of wild fish in undamaged rivers.  Fishing throughout Europe gives me the same confidence and sense of development as it always did, but returning to the rivers of England, particularly local to where I live in Cumbria (so I know these best) fills me now with a sense of acute disappointment, at the very least.  The contrast between the state of various European river systems and those in England is disturbing.

In Slovenia we fished essentially pristine rivers ranging from alpine areas to tail water sections.  The wonder we all felt stemmed not only from the incredible numbers of brown and rainbow trout and grayling, but from the clean, clear waters with almost no hint of agricultural damage anywhere.  Quite the opposite, really, in that bordering hay meadows are very carefully looked after, while heavy machinery, arable crops and grazing cattle are kept well away from the river banks.

Perhaps surprisingly, it is the same almost everywhere one goes in Europe, and we fly fishers do manage to pass through some of the most beautiful landscapes imaginable.  I now spend quite a lot of time in northern France and there – where so much of the Common Agricultural Policy was nurtured – we also find idyllic trout streams and properly conserved meadows and woodland.

Then, we cross the Channel…

We have become used to the abstracted, nitrate-enriched flows of the chalk streams, but as we travel north, where we expect the wildness of English nature to survive to a certain extent, many of us experience feelings ranging from concern to alarm.  Anyone who sees the Eden nowadays, particularly those who knew the river a decade ago, or more, will be dismayed.

All stability in the flow has gone because of the drainage for agricultural purposes, rather than any real change in average rainfall.  Farming damage has been colossal, with massively increased herd and flock sizes, completely over-loading what the land can sustain, while arable farming has increased drastically; all worked with ever larger and more damaging machinery which has no place in ecologically-sensitive landscape.  The list of damaging influences on the river is almost entirely of agricultural origin.  It is very clear to any simple, honest analysis: short-termism in the form of unsustainable agriculture, benefitting the few, comes a long way before conservation measures which could benefit the majority and the environment at large.

The strength of the self-wealth generating agricultural community is such that the conservation designations (SSSI, ESAC) that the Eden holds, put in place to protect its varied habitats, effectively fail, while the powers that be are in denial within a conspiracy of mediocrity, fuelled by the apathy of the non-fishing public. It is this, finally, which will put an end to any development in this area of our little sport, because the wild river is disappearing among the agricultural abyss of modern England.  The alternative – stocked and essentially artificially maintained trout rivers – is essentially no alternative worth very much, certainly not when measured against what it replaces.  While most of Europe seems to have learnt this lesson in time, one wonders if this will be the case in England.