There are so many angles to consider: so much to work out in order to put the fly where the fish is.

This is what it is all about, once we’ve studied the water, river or lake, chosen our position and what fly we need to fish. We have seen fish, or indicators out there which just spell fish: we have read the waters. Instinct is already kicking in, marrying with experience, and we’re choosing the right angle on the fish. This means we know where our fly needs to be and from where we need to cast.

I love this stuff. I mean, I really adore it. It is one of the many aspects of this sport that I savour when I am out there in an international: analysing the water, reading it, and then working out the presentation. This is what it comes down to, after all, because I know, finally, that if I get the presentation right, the rest will work out. I’ll catch my trout, or grayling, and I’ll make the frame. If I blow the presentation, the game is lost.

I want to stress this. Get to the river, or lake shore, or start of the next drift, and figure how you will need to present the fly or flies. Think about the rig. Is it duo, or a single dry, or a team of nymphs…? Think about your position. Is it forced on you, such as the start of a drift with the drogue set, or perhaps because there is only one hole in the foliage on the river bank; or can you choose it, such as the position in the water for a wader? Once the position is set then it comes down to the cast and the leader (because you will have chosen the line and the fly). Now, we can only get this right if we look at some actual circumstances. I’m choosing here some typical situations and conditions, for the sake of reasonable coverage; but in the final analysis, the permutations are endless, the variables too many for us to deal with as mere mortals.

Let’s stay on the river, and not just presentation; but presentation in match-play. It is the Gaular near Forde on the west coast of Norway in last year’s European Championships and my team-mate Stuart Crofts – one of the best English river tacticians of all time – has arrived at his sector with his controller and he’s mapping it out, working out all the possibilities that he can read. The river is bisected by an island, and he can fish it all, so long as he brings each fish he catches back to his controller, for measurement and release. It is a complicated beat, though very fishy. He knows he will catch a lot, but he has to maximise his performance in the three hour session, which means, finally, maximising the fish catching potential in all the variety of water in front of him. There will be no time to change leaders and fuss about with spacings. Even fly patterns, following rigorous and exhaustive team practice, have been largely pre-selected. Stuart sets up two rods, one with a single dry fly (a sedge pattern) and the other, a more complicated, three pattern nymph/spider rig. The latter will give the majority of his fish, though the dry will cover those other possibilities which the nymphs cannot properly access.

And this is the point – accessing all the fish, in all the variety of fish-holding water on a complicated beat. This is, I claim, hugely technically demanding, and is one of the reasons I adore it. Stuart takes such painstaking care with his presentation rigs, perfectly (yes, perfectly) tuned to his casting skills so that he can put that fly exactly where he wants it within the three-dimensional space of the river. On this particular occasion, for example, his dry fly rig was a gently tapered six feet section of Bayer Perlon (down to 2.1lb at the point) attached to a beautifully supple tapered furled leader (in mute tan colour) of four feet. Presented on his 9′ four weight, Stuart can put the fly where he wants it, with gentle presentation – this is mostly about accuracy. In the match-play of a Championship, a cast off fish-holding water is a cast wasted, and there is not the time for that.

Stuart is essentially a short-range caster by choice, based on his astonishing skills with fish at this range on the river. He wades up on fish (or stalks along the bank: and I have known him to climb trees and even swim across to the far bank), so brilliantly choosing his angle. His rig is such that he knows in advance that his fly will be right on the fish when the cast, and any allowed-for drift, is delivered. On his three-nymph rig on the Gaular, he knew which fly would be taken before each fish had taken: because his presentation was so methodically calculated, he knew where the three nymphs or spiders were in the water column, and where the fish were hanging…

Stuart walked off the river that day with 36 measurable trout; effectively 12 fish an hour, on complicated water. It gave him third place on his sector and contributed hugely to our silver medal team position. He was exhausted by this feat, because he had had to wade through torrents, climb all over an island, and bring every netted fish back to his controller, and I know his concentration was immense and total. Of all the reasons for his success in that section, I would put presentation at the very top of the list, differentiating as I do all the components, such as watercraft, experience, casting and fly design, that integrate into a genius fly fisher such as Stuart Crofts.

If you are interested in other fly-fishing expeditions with Jeremy to the San River in Poland please visit Pioneer Flyfishing and don’t forget to mention you saw this on Fish & Fly! Or closer to home he also guides in the Eden area up in the lakes – details at Wilderness Flyfishing 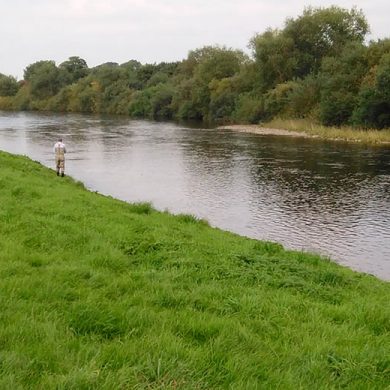