Fishing on the Frontier – Part 8: The Switch Cast!

I said that I would go further into presentation, learning from times out there in Europe, particularly on the great rivers. This is the frontier of our sport, really, and is what really excites me, because I find myself forty years into fly fishing and still learning, still pushing the boundaries.

You see, while your watercraft has suggested the location of the fish, you still have to deliver your fly to the right place, and then present it so that it has a chance of being accepted. The cast is vital in all this. Put in the wrong cast and all is lost, simple as that. I have talked so much of choosing the right angle, and reading the water, but finally you will have to put in an appropriate cast in order to deliver the fly with suitable presentation. You will have done your range finding, often without thinking about it, measuring the length of the required cast (not necessarily the distance between you and the fish), and will have placed yourself as comfortably as is possible in the river, ideally with feet spread apart about half a metre, feet pointing roughly at your target.

Picture this: you have a team of two or three nymphs, exploring the water, generally casting up and across, dead-drifting until the flies are straight across the stream from your position, before tightening down on the line so that you are in contact with the flies, feeling for takes, while they begin to rise, inducingly, through the water column. You might relax the tension, even feeding out line or mending, before clamping down again, lifting and swinging the flies downstream. Takes might come at any point, either visual in the form of the line stopping on the flow, or drawing away upstream, or tactile.

Finally, the fly drift is spent, hanging downstream. You can swing the rod tip, and the flies, in further towards the bank, and back again; but you are now at the limit and must cast again. And here is the crux of the issue. How are you going to cast the flies so that they rapidly, or most efficiently, are delivered to the beginning of a new drift?

Convention has it that from this position in the river you will have to employ a change of direction roll cast such as a single Spey in an upstream wind, or a double Spey in a downstreamer; perhaps a Snake roll which is faster and more efficient than either of these. In reality, however, particularly with deeply sunk nymphs, none of these is ideal. The largest angle change you can achieve with any efficiency at all (meaning good turn-over) is around 100 degrees, better 80 to 90 degrees. But this will achieve placing your team of flies only directly out in the stream from your position, not upstream as you need. From here you simply have to repeat the casting process and go for another change of direction roll cast: hardly efficient, very time consuming, finally inelegant.

There is a solution, and it is really neat. I call it a Switch cast, because it accomplishes a 180 degree change of direction, switching the flies from directly downstream to directly upstream. The flies are hanging beneath you, downstream. If you lift and accelerate, as if beginning a jump roll or single Spey, the flies will launch from the surface, following the rod tip – as with all casts. Put a stop point in off your left shoulder (if you are a right-handed fisherman) and the flies will follow a fairly straight-line trajectory, bringing about the switch cast. It is important to be firm with the stop point, before following through. Remember that the line and flies will always follow the rod tip. Presentation is optimised by an upstream mend being put in as soon as the fly line has touched the surface, allowing maximum dead drift, and the sinking of the flies.

With the single Spey, in which you can adjust the angle of the forward roll cast by swinging the line bankward (behind you) as you accelerate into the jump roll, the more you take the line in towards the bank, the greater the angle change of the final Spey cast. This is exactly the same with the Switch cast. If you want the final trajectory of the flies to be up and reasonably across the stream, then sweep the flies in bankward at the commencement of the cast. It is so smooth, a single, continuous motion cast (as with a single Spey), and is so quick in the execution, accomplishing an extreme angle change (between 120 and 180 degrees) which is very difficult to achieve even with a Snake roll if flies of any weight are used.

This cast has made a HUGE difference to my nymph presentation on rivers. It occurs to me, looking at it objectively, that it is a part of the presentation spectrum that has stemmed from observation of the great European teams – the French and the Italians, the Czechs and the Poles. It is actually what we would probably arrive at in any case, instinctively, during fishing practice in real time, because it is so efficient and finally makes such a difference to our fishing time on the river. See it like this – the Switch allows me to halve my casting presentation time (or more), significantly increasing the time that my flies are being presented where I want them, than when I am blinkered by the Spey cast routines.

Finally, you find your own solutions. Competitively, I will always take the most expedient route to presenting my flies where I want them, as efficiently as possible. Try the Switch if you do not already. Spend a day on the winter river, where every drift counts, because there might not be too many of them, and you might see my point.

If you are interested in other fly-fishing expeditions with Jeremy to the San River in Poland please visit Pioneer Flyfishing and don’t forget to mention you saw this on Fish & Fly! Or closer to home he also guides in the Eden area up in the lakes – details at Wilderness Flyfishing 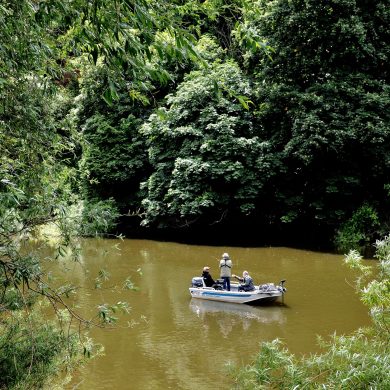