The Albarine river is the jewel of the Ain department in the South East of France. An extraordinary work of restoration, maintenance and the excellent fishing management from the local foundation has turned the gin clear river into one of the best destinations in Europe.

According to Nicolas Goussef, president of the Fishing Federation “The Albarine river undoubtedly became in a few years one of the top ten beautiful rivers of Europe in term of quantity of native brown trout and grayling!”

Ain is a department named after the Ain River on the eastern edge of France. Being part of the region Rhône-Alpes and bordered by the rivers Sâone and Rhône, the department of Ain enjoys a privileged geographic situation. It has an excellent transport network and benefits from the proximity to the international airports of Lyon and Geneva.

The 17-kilometer-long Albarine river, with its top quality waters and its three tributaries is an enchanting place, which will prove equal to your expectations. Like all rivers in the Jura Mountains, its crystalline water is overflowing with trout, grayling, and minnows. On the upstream part, the river takes its source north of Hauteville at 950 m of altitude. This sector is completely disconnected from the intermediate river by the famous “waterfalls of Charabotte”, a cascade made up of three falls of 60, 40 and 15 metres and extremely photogenic! At the bottom of this cascade, another river takes place. The Albarine’s river receives here important contributions of resurgences, which inflate its flow before entering deep throats!

Downstream you enter a kind of small fly-fishing paradise. The local “zebra trout” is one of the most popular fishing species in France. Highly adaptable and intelligent fish I have ever seen, these native brownies furnish probably more fly fishing sport than any other in the Rhône-Alpes region. Some French scientific studies have shown that anglers and even fly anglers have lower success rates when fishing for brown trout than any other species of trout. The Albarine trout is a sophisticated feeder and a spooky fish to catch but that is part of the dream.

The river provides nowadays very clean water, good cover, proper temperature range, and excellent food supply. Grayling were introduced ten years ago and have since spread through the main river and the small tributaries. With its distinctive dorsal fin, the grayling is perhaps the most striking of Albarine’s river game fish. Found in all part of the river except up to the waterfalls, the grayling is equally at home in the large pools, small currents or flat parts. The grayling fishing opens here in May to the end of September, with the peak fishing period being June through August. Most grayling average 35 cm, but fish up to 50 cm and 4 lbs have been recorded. Feeding primarily on insects, the grayling offers one of the finest dry-fly fishing opportunities in this river.

A few fly-fishing tips: The local “zebra trout” don’t like bright light. Their eyes and methods of feeding depend on low light that allows them to hide and attack their prey. You will not catch a large one feeding on the surface during the middle of the day in bright sunlight. Go fishing early and stay late. This is how I have caught the biggest ones (5 and 6 pounds)! It is possible to catch a large brown trout on a dry fly, but it is not probable except during the wonderful mayfly season. Your best bet is to fish flies below the surface of the water, such as small pheasant tail and hare’s ear nymphs. Brownies and grayling provide great sport for the angler equipped with a four, or five-weight rod with a suitably lightweight reel. By far the most common fly line is a weight forward floating line. Tapered long leaders terminating with 6X-7X tippet are generally sufficient. The fly box of the angler in the know will contain several imitations of mayflies, caddis flies, midges, and mosquitoes and of course shrimps patterns and nymphs that are more standard!

My leader for the Albarine river: 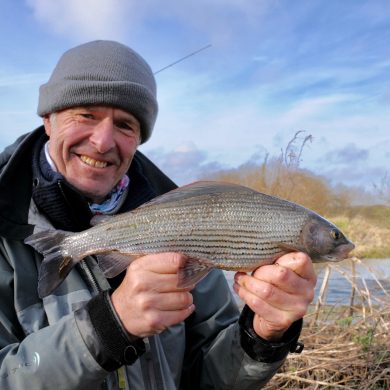