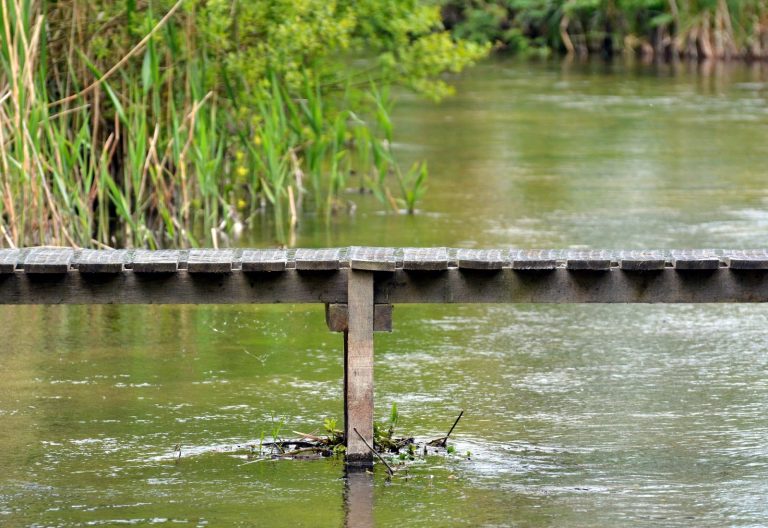 Further Dimbulbs and Worms, plus many Weasels

Just been watching the weather on the local faction of our state TV.

When did ” it will be sunny” ” become “there will be some brightness”?

Why not add “with no little contrast” if we are trying to up the word count.

Anyway, good evening everyone and here’s the latest news from this parched part of this once great Isle. 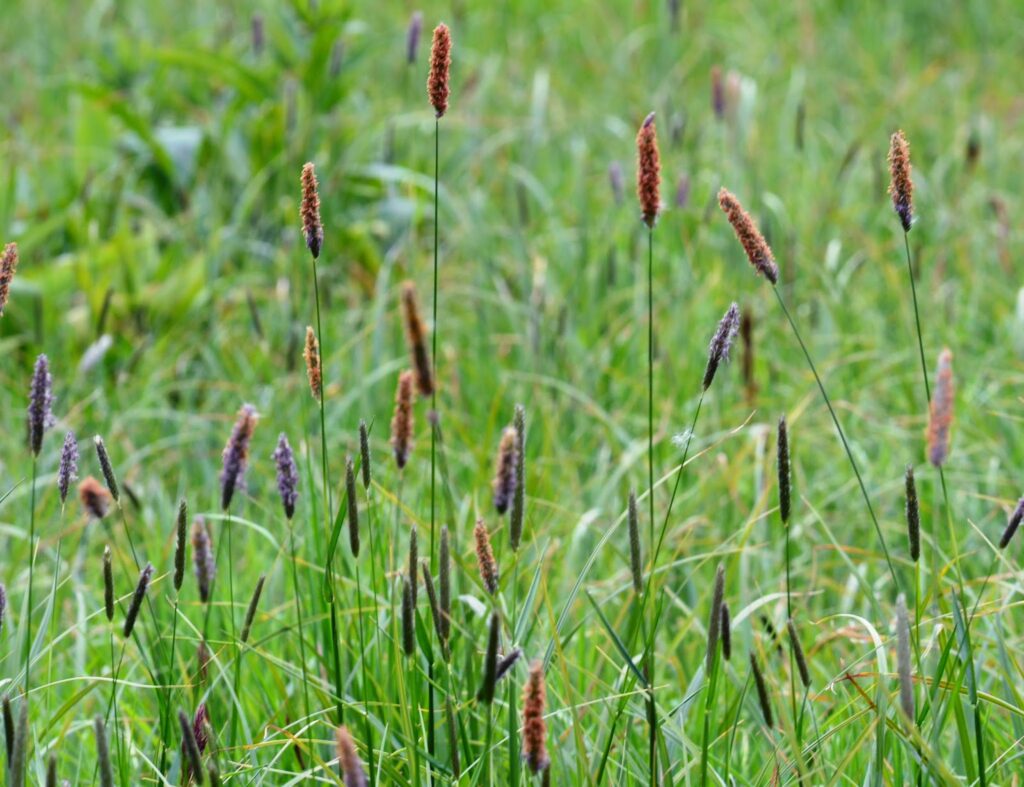 The river continues to fish its head off with the first knockings of the Mayfly producing many fish. It’s just the odd Mayfly presently but shuffling about in the gravel with my fine net confirm that there are many larvae in the gravel on the cusp of hatching. 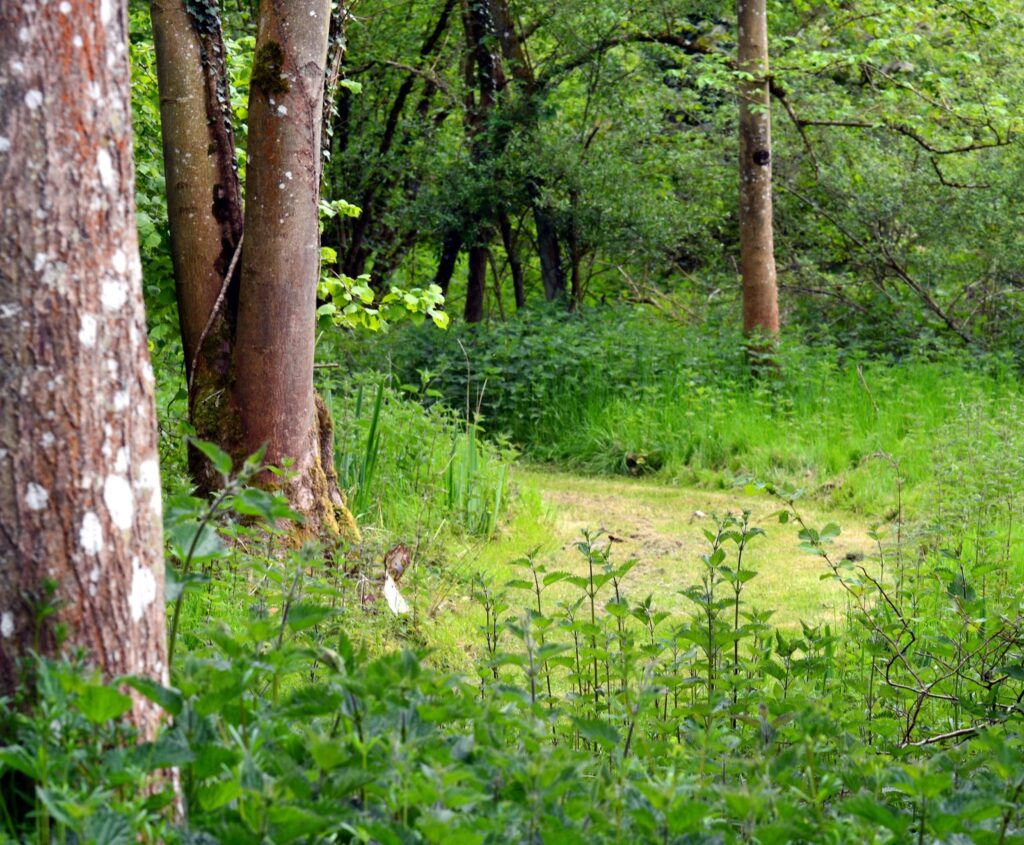 Many fish are falling to “small brown jobs” on a size 14 and a few have been pricked and lost although not nearly as many as the opening weeks of last season. The river continues to carry a little colour and an increasing amount of foam on the water in the first few hours of the day is indicative of a river that has not benefited from a good scour during the winter months. We have had a few heavy showers but aquifer replenishment at this time of the year requires days and days of steady rain as all the plants are now wide awake and slaking their winter induced thirst.

During recent skirmishes in the Bourne Valley in the name of prolonging life through the plodding, Madam and myself came across an expanse of pasture, recently cultivated and re-drilled with grass. In the absence of moisture no germination had taken place and with no roots to hold the thing together and provide some form of cohesion the ten inches of tilled soil bore the consistency of sugar. 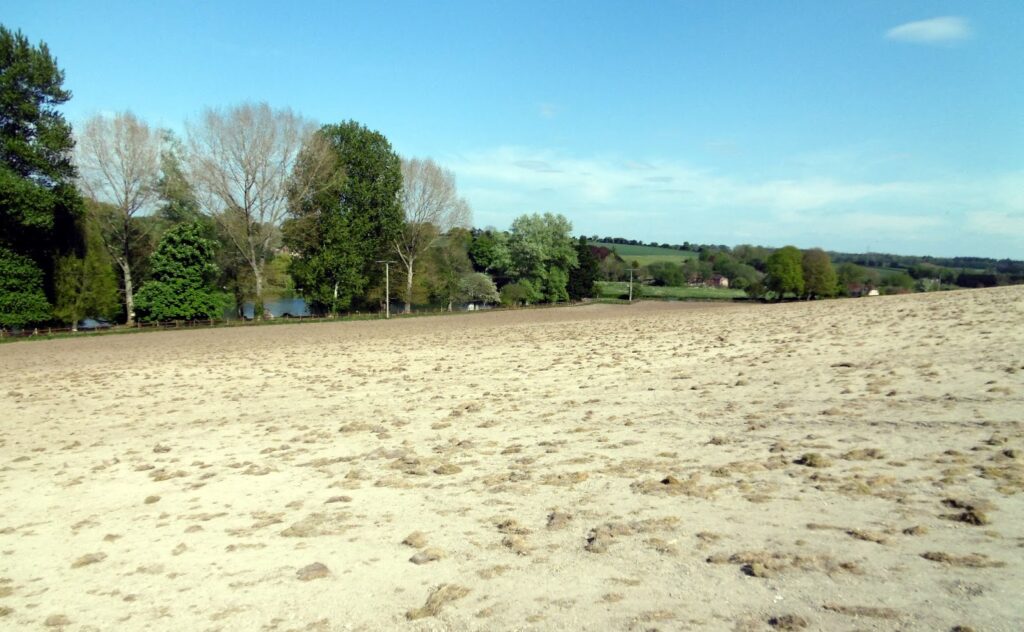 One heavy shower could see much of this field end up in the Bourne.

What times we live in.

I remember farmers in Cheshire cultivating slopes in a particular manner in order to prevent losing soil, it may even have been mentioned in O Level geography and I ‘m sure other cultures are all over the “hanging on to your top soil on slopes in times of sudden intense rainfall” conundrum. 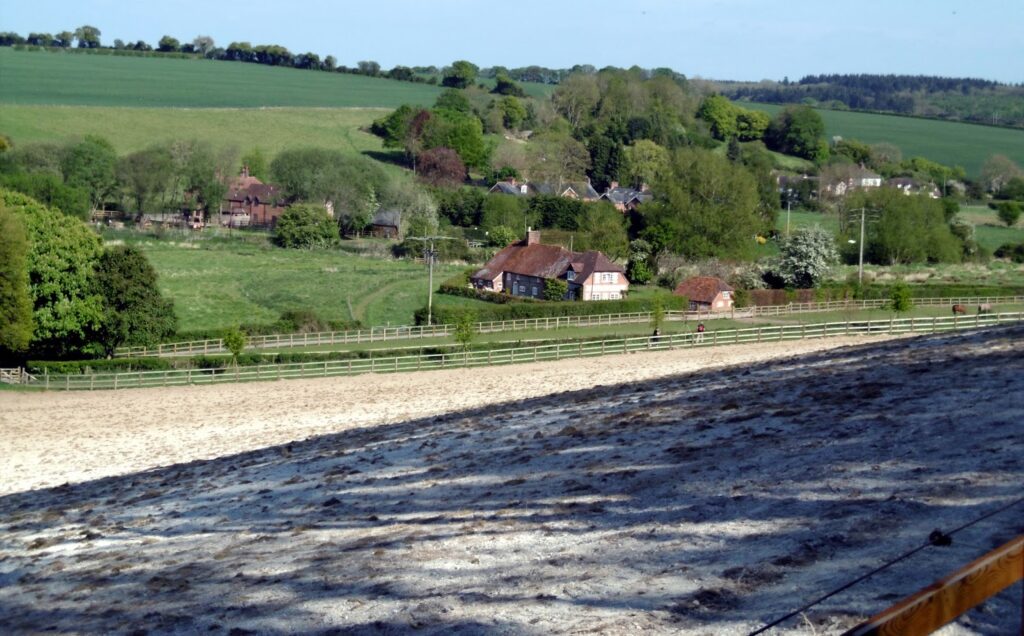 On a couple of occasions it has been suggested by experts that I fling a load of breeze blocks into the river to provide an easy lie for developing brown trout. Apart from the look of the thing and the inevitable accusation of fly tipping from some quarters , our developing trout do well enough for easy lies. It doesn’t take much, a stone the size of a fist is ample for a tired trout in search of an easy meal in this river. 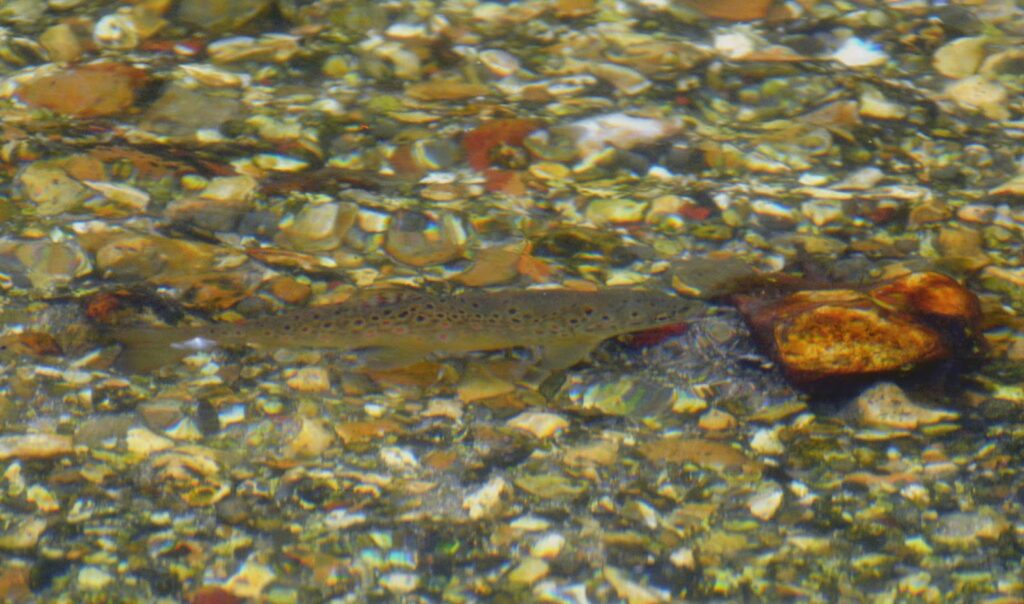 These Trout would seem to concur and are doing well enough without a delivery from Buildbase.

It’s started raining now and while the garden and grass are grateful, public and press attention will turn away from water shortages but the aquifers around here will receive little of the eau that falls. It takes an awful lot of steady rain at this time of the year for aquifer replenishment and much of what has fallen in recent days will not get further than the first few feet of soil. I could still walk up our river banks in six inch stilettos if I so chose without any real fear of sinking a heel.

Last week saw me resume my practice of throwing things at the television. A local news feature on river levels featured a Weasel from a water Company insist that aquifer levels were not causing concern and that there had been replenishment this winter.

Well for “not causing concern” read “couldn’t give a shit about your river, all we are concerned with is providing domestic supply as cheaply as possible in order to maximise profit.”

I’ll now proceed to jab my finger a bit. 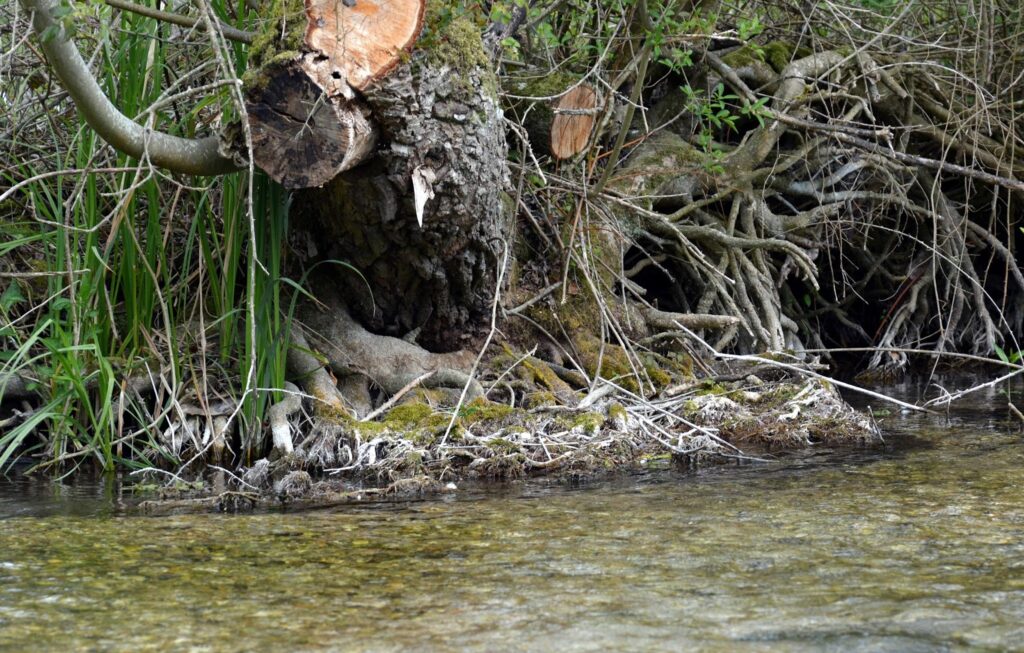 Who caused the foam problem in this river two seasons ago? 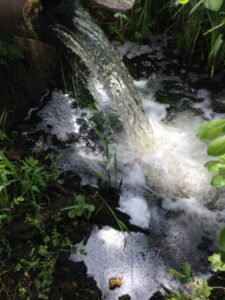 Whose name was on the side of that van sending brown water pumped from a hole they had dug in the road down a ditch into the river in June? 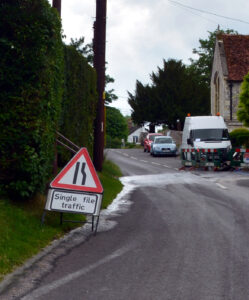 Who put up the signs on bridges crossing a famous chalk stream advising people that raw sewage had been pumped into the river and please wash your hand and dogs if they come into contact with the water?

Who is opposing the reduction of the abstraction licence for the Candover stream arguing that rather than reduce the impact to the aquatic environment we should carry on as we have and they’ll have the water for domestic supply? 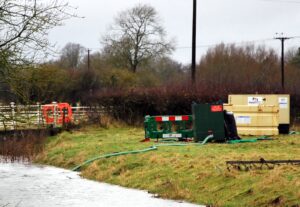 I could go on and frequently have but…

Oh sod it, this will have to suffice:- 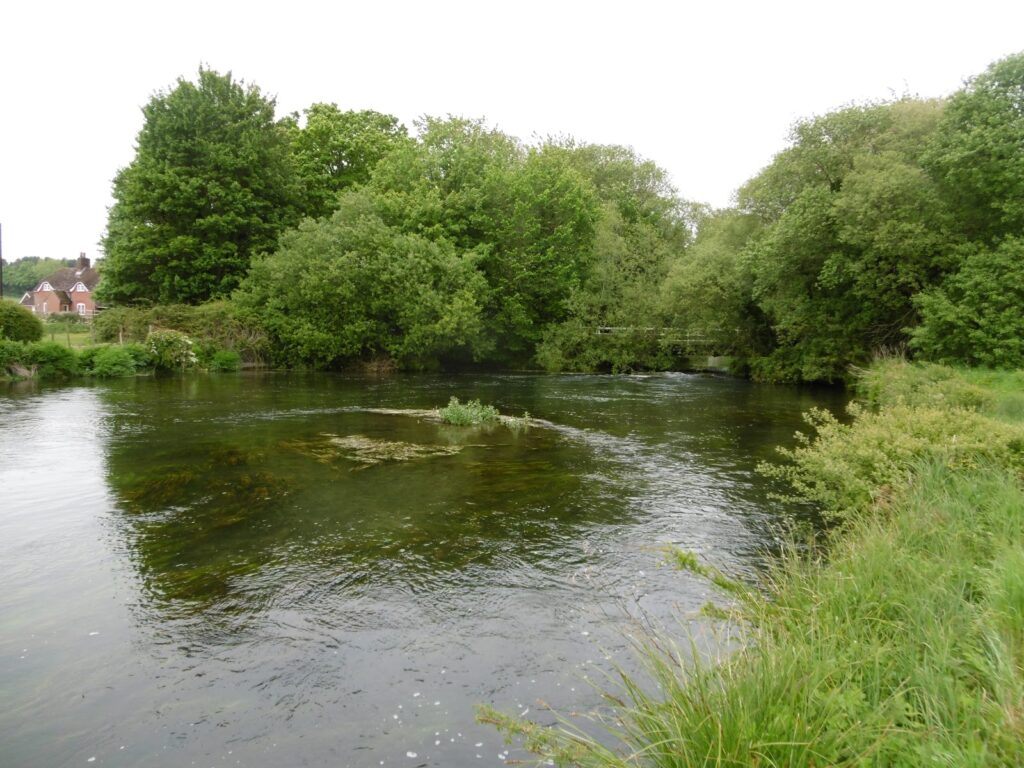 Returning to the river, which our water man would insist is running at a normal level, despite features such as this appearing midstream.

This kind of thing happened in the summer of seventy six, Ernie Mott, a keeper on the middle river at Leckford took full advantage and famously grew his tomatoes for that year in the middle of Beat fourteen, or possibly twelve.

I might echo old Ernie so If you see a Poly tunnel in the middle of the Itchen below Easton bridge you’ll know what’s afoot, just don’t scrump my tomatoes.

Which brings me onto the roach who have currently gone spoony and moon about in shallow water in preparation for spawning. There’s a few lumps in evidence but nothing to match the fish I saw spawning three years ago which I put at over three pounds.

I’m trying to ignore the election at the moment because recent history teaches that what any politician promises in the run up to the vote can be discounted once the results are in. It’s all about getting the result then, can we all agree to forget about what we promised in the past few months because we’ve decided to go back on that.

The morning press release outlining the bones of a speech a particular will make later in the day is starting to grate.

Does she/he need to make the speech if it’s contents have already been deliberately leaked to the press? 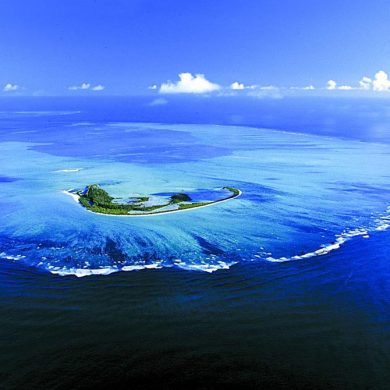