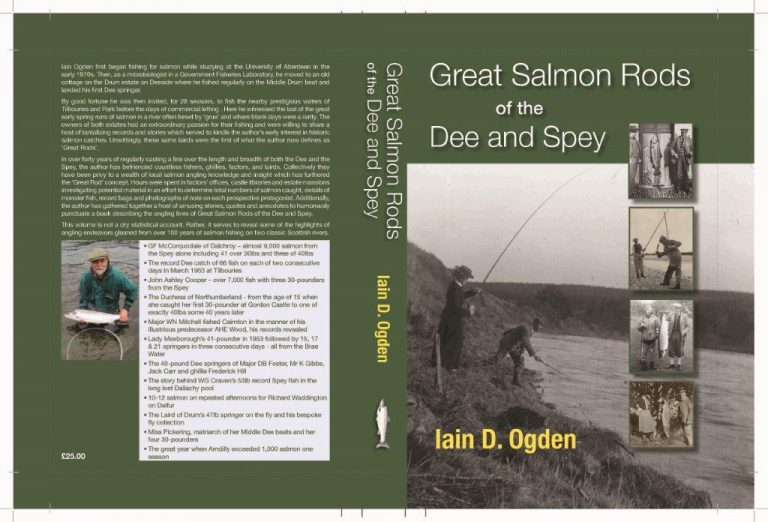 Great Salmon Rods of the Dee and Spey by Iain D. Ogden

In over forty years of regularly casting a line over the length and breadth of both the Dee and the Spey the author, Iain Ogden, has befriended countless fishers, ghillies, factors, and lairds; collectively they were privy to a wealth of local salmon angling knowledge and insight. Hours were spent in factor’s offices, castle libraries and estate mansions investigating potential material in an effort to determine total numbers of salmon caught, details of monster fish, record bags and photographs of note on each prospective protagonist. Additionally, the author has gathered together a host of amusing stories, quotes and anecdotes to humorously punctuate a book describing the angling lives of Great Salmon Rods of the Dee and Spey.

The author, who lived on Deeside for 25 years and fished widely on rivers throughout Scotland, has previously published a memoirs book Casts on the Dee and Spey. He first began fishing for salmon while studying at the University of Aberdeen in the early 1970s. Then, as a microbiologist in a Government Fisheries Laboratory, he moved to Deeside and landed his first Dee fish. By good fortune he was invited, for 28 seasons, to fish the nearby prestigious waters of Tilbouries and Park before the days of commercial letting. Mr Ogden explains, “It was here I witnessed the last of the great early spring runs of salmon in a river often beset by ice and where huge catches were commonplace. The owners of both estates had an extraordinary passion for their fishing and were willing to share a host of tantalizing records and stories which served to kindle my early interest in historic salmon catches. Unwittingly, these same lairds were the first of what I now define as Great Rods”.

“This volume is not a dry statistical account. Rather, it serves to reveal some of the highlights of angling endeavours gleaned from over 100 years of salmon fishing on two classic Scottish rivers.”

The book, which is being released in time for the Christmas gift market, is a must for anyone with an interest in salmon fishing or with an affiliation with either the R. Dee or R. Spey.

The book is 327 pages hardback, fully illustrated and each of the 500 copies signed is by the author.

More Information on the book

Iain D. Ogden has fished extensively throughout Scotland and Norway and has landed over 1,000 salmon.

The book’s Great Rods include:

Start typing to see results or hit ESC to close
salmon fly fishing chub roach pike
See all results
More Stories
Tying the The Two Hook Dropper
This website uses cookies to improve your experience. We'll assume you're ok with this, but you can opt-out if you wish.Accept Reject Read More
Cookies Policy