John Hemingway’s enthusiasm for sport fishing and the natural world can be traced along a family lineage that reaches back to his brilliant and famous grandfather, Ernest.

Now, Hemingway is paying tribute to his celebrated, fly-fishing relatives in a fascinating article for the Atlantic Salmon Journal about the return of salmon to the Seine River in France – a story of hope for the future of the king of sport fish.

Hemingway’s article, “Salmon in the Seine,” will be published in the upcoming fall issue of the journal, a publication of the St. Andrews-based Atlantic Salmon Federation.

“Fishing is a way of rediscovering the true beauty of life,” Hemingway said in a phone interview from his home in Montreal.

“My grandfather was a conservationist and if he could see the world today, I’m sure he would think it’s a mess. We are reaching a series of crisis points in so many areas of the environment and in our society itself. So while my article is hopeful, we really need to seriously rethink how we are living.”

Hemingway’s article centres on the return of wild Atlantic salmon to the Seine following a 25-year clean-up effort of the river and its tributaries.

The Atlantic salmon used to be plentiful in the Seine – along with many other species of fish – but industrialization, population growth and the resulting pollution wiped out much of the river’s aquatic life by the early 1900s and by 1995 there were only five fish species remaining in the waters near Paris.

In 2009, Atlantic salmon returned to the Seine. They were not put there by conservationists but rather, almost magically, returned on their own.

“The discovery in 2009 that at least a thousand Atlantic salmon had passed through Paris in their migratory run up the Seine ties that city even closer to my grandfather,” Hemingway writes in his journal article.

“After a 25-year effort to clean up the waters of the Seine and its tributaries, the salmon are back. Perhaps not at the levels they knew before the end of the 1800s when they were all but wiped out by industrial and chemical pollution, but enough for at least one catch-and-release fisherman to land a 13-pound Atlantic salmon just downstream from Paris.”

Hemingway said he has never cast a line in a New Brunswick river but hopes to someday. Born and raised in Miami, he spent many years in Europe before moving with his family to Montreal a few years ago where he now owns and operates a café. It was there, earlier this year, that he had a chance encounter with Martin Silverstone, the editor of the Atlantic Salmon Journal. Before long, Silverstone had convinced Hemingway to write the Seine story.

“The Seine River recovery story, although a small part of the article, is significant in that the fish have returned on their own” Silverstone said.

“Unlike bigger restoration efforts on the Rhine and the Thames, the Seine restoration relied solely on sewage plants and other river improvements. The improved water quality was enough to bring back salmon. This is good news to the thousands of volunteers that work to restore water quality to rivers in any area where Atlantic salmon once swam”

Hemingway also writes in the Seine article about his late uncle Jack, who he is named after and who taught him the finer points of fly fishing. While Ernest was a lifelong angler and game fisherman, his son Jack, a decorated veteran of the Second World War, was so dedicated he used to pack a fishing rod when making military parachute jumps into occupied France.

“As a boy I remember asking him when I saw the scar on his left arm, if he ever saw the soldier who shot him that night as he drifted down in his parachute. ‘No,’ he answered smiling, ‘never had the chance to get his name,’” Hemingway writes, recalling his uncle’s injury and capture by Germans.

Years later, when his memoir Misadventures of a Fly Fisherman was published, he wrote that he had asked the Austrian surgeon at the POW camp where he was interned to save his arm. He didn’t want it amputated because that was his casting arm”

Hemingway wrote a memoir about his family, Strange Tribe: A Family Memoir that examined the relationship between his father, Gregory, and Ernest. He remains keenly interested in his grandfather, noting in the interview that this year is the 50th anniversary of the awarding of the Nobel Prize to Ernest for a body of literary work that includes such famous books as A Farewell to Arms and The Sun Also Rises.

Hemingway said he was recently fly fishing on the Isonzo River in Italy near what once was a fierce battleground in the First World War. Ernest Hemingway fought in Italy in the Great War, was wounded there, and set A Farewell to Arms in the area where his grandson was fishing a century later.

Hemingway said it is a beautiful river with snow-fed, emerald blue waters. Yet it is still possible to find bullet and shell fragments from the ferocious battles that killed thousands.

“The Isonzo, like the Seine and many others, while connected to man and his wars and civilization can always heal itself when given a chance.

The fish can return and a balance can be restored. This is what I’ve learned with my fly rod and reel and my grandfather’s stories.” 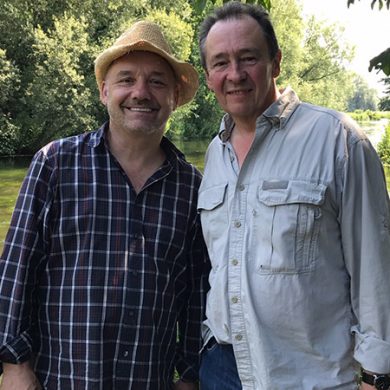 Bob Mortimer and Paul Whitehouse film fishing series
This website uses cookies to improve your experience. We'll assume you're ok with this, but you can opt-out if you wish.Accept Reject Read More
Cookies Policy