The Kharlovka, Litza and Rynda/Zolotoya – Statistics for the week:

Following on from a fantastic opening week of the autumn three rivers programme we were delighted to start the whole process all over again last Saturday when our latest guests arrived at the Kharlovka Camp, all dreaming about landing the big one. In fact, with the exception of our new Italian friends along with a couple of new Finnish faces, most of the boys had already fished the Northern Rivers several times before.

Unlike the previous week, which had brought mostly cloudy skies and mild temps, last week the conditions were inconsistent and all over the place – from bright, sunny days and cool temperatures in the low single digits to dark, warm and windy days with periods of good rain – and even thunder and lightning – towards the end of the week.

Although we had plenty of rivers to fish we really could have done with a bit more rain earlier in the week as the water levels dropped away from -6cm down to -10cm before rising up a much needed 8cm during the final day. The water temperatures continued to be fairly mild for this time of the ye,ar finishing off the week with a reading of 10C.

Despite the changing weather all of the beats on all of the rivers continued to provide consistent action. Nearly every pool on the Rynda seemed to be fishing well, with the Eagles Nest and Tolstoi a couple of the favourites. The whole lower Kharlovka, and also the pools of the lower Litza, especially Reindeer Rapids, all fished well through the week too. As far as tactics were concerned the boys were using floating lines and light sinking tips with flies that ranged from a variety of colourful shrimps and willies, highlanders, and Gkillers, to sun rays.

Low late season water levels along with mild temperatures meant that the conditions for the fall run of Osenkas were not ideal, with the majority of the run most likely holding off until the water rises and the temperatures start to drop consistently down into the single digits. Although the autumn season is running a week or two late, there were still stories of good sized Osenkas spotted moving through the pools on all the rivers.

On the first day Max inspired us all with the wild look in his eyes after returning back with Sergey from the middle Litza. Still shaking and stuttering hours later, we understand that Big Max paused for a cast with his hand-tied flaming Chernobyl Salmon Ant off the top of the rocks high above the Crack Pool when a huge bright sliver monster took his fly and was off…

Estimated to be around 40 pounds, they battled for some 45 minutes, going some 150m downstream before the huge Osenka finally broke Max off by wrapping him around a rock. Hard lessons were learned; however as they say, better to have loved and lost than to never have hooked it at all. Thankfully Max went on to land many other good salmon during the week including a new 26 pound PB off Rock Island on the Rynda.

Honourable mention also goes out to the super Fins: JJ, Pasi, Antti G and Antti P. Thankfully one of the Antti’s didn’t get enough this spring and was back again for round II with his friends. While Antti wasn’t able to beat the bright silver 33 pounder he had on the Kharlovka earlier this June, he did find 25 other good salmon, including a several solid 23, 25 and 27 pounders.

The Mediterranean corner included our amigos from Spain and Italy and all had a good laugh together along some nice salmon. Steffano deserves an honourable mention for landing five beauties in a row between 12 and 19 pounds out of the small pocket below the Russian Pool on the Zolotaya. However it was Malaca who had the bragging rights in the end proudly claiming his certificate for the biggest fish of the week at 33 pounds.

A welcome twilight now settles over camp at about 10 o’clock. The birch is just beginning to rustle a ‘green-highlander’ yellow on the still mild southern breezes. Buckets full of berries and bags of mushrooms seem to arrive back at camp with every flight. With those much needed rains arriving just in time to freshen the rivers back up along with the recent reports of large salmon splashing about in nearly all the pools, we are looking forward to everyday of this final week of the year.

If you are interested in making a booking for the Atlantic Salmon Reserve for the 2015 season please contact info@fishandfly.com 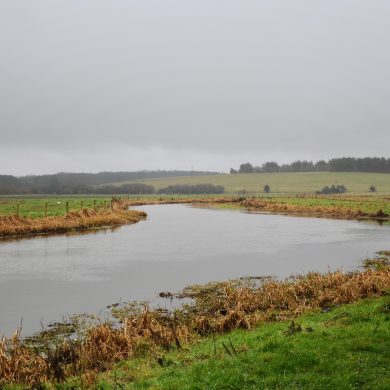