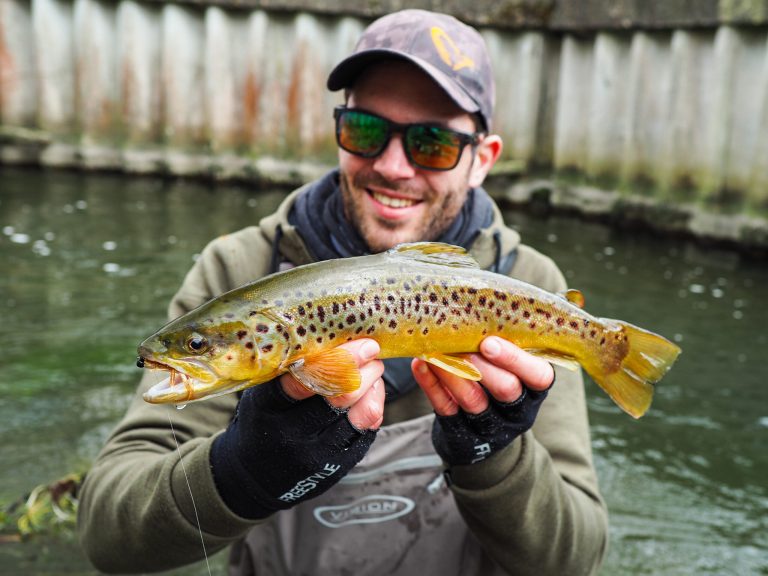 In last week’s blog I wrote about catching up with Rob and Sam for some lure vs fly action. The fly paved the way to a fantastic day’s fishing, but I was still hungry to have a go with the lures. So we set out on Day 2, with the goal of solely lure fishing for these magnificent spotted rockets.

After a morning searching out fresh venues, we decided to finish the afternoon back at the spot from Day 1, eager to get on the water, having seen some great fish follow on the first day.

I left my fly rod in the car to focus on lure fishing. The three of us went straight in with our previous top tactic. Fishing with the tiny Savage Mayfly Nymph on one gram jig heads. A slow start with the micro lures, just a few lazy follows. So we decided to switch it up and find the right tactic. I continued with the Mayfly while Rob and Sam tried the bigger crankbaits and soft plastics that we had struggled with the first day. Suddenly it happened! It was like a light had switched on as I hooked into my first fish of the day. Rob and Sam were also in! A triple hook-up, chaos erupted on the bank, and soon we landed three quality brown trout. We slipped them back, hopeful of a bigger fish, and continued fishing. The finesse approach soon dried up for me, meanwhile the twins were getting lots of follows and action on the larger lures. I decided to switch it up, rigging up with a 7.2cm Craft Shad on a 2.5g jig head. I fished the larger lure through the swim much faster, allowing it to pause occasionally between bursts of speed. Whack! The tip slammed around, and I was into another nice brown. Charging with lots of short fast runs until it reached the net. The next hour in the swim was just as hectic. I managed to lose a few and witnessed the twins land a few more. At one point Rob was getting teased by a quality brown around 4lb. After missing the lure, it became a frequent follower, unfortunately not willing to commit to a take, definitely one for a more subtle fly approach. The fish had become cautious, it was time to change area.

After walking the banks we came to a bridge, the perfect hiding spot for a large trout or two. The twins took that spot, both banking cracking browns around the 5lb mark. Meanwhile, I disappeared off downstream to a wide, slow, area that looked perfect for a decent trout. I cast my lure downstream, working the near bank flow line. This time I slowed my retrieve down in the slightly faster current, allowing the lure to sink down before winding in slow and steady. I felt a tap and carried on with the retrieve. Suddenly, the tip jerked round, I had set the hook into a powerful fish. An epic fight followed as the fish took line while performing an acrobatic display. My ultralight rod was bent double and I had very little control. I followed the fish downstream as it thrashed at the surface, deciding to net it where there was less flow. A beautiful trout, smaller than the others, but featuring defined sharp markings, possibly one of the wild residents. Either way I was thrilled. After the excitement I sat back and watched the twins fish for the final half hour or so.

Having mainly fly fished for trout, lure fishing was a learning curve. I was eager to try some of the retrieval techniques that had worked with lures and translate them to streamer fishing. Hopefully this would fire up the trout back home, and get me closer to beating my PB. Trout are extremely fun to fish for on light tackle. Lure fishing is inexpensive and a great way to experience the species. It also opens up a lot of water that isn’t suitable for fly fishing, granting access to locations many wouldn’t attempt to fish. Below I’ve added a brief piece about tackle and lures, hopefully helpful if you want to have a go yourself.

Ideally for trout, rods in the 1-5g range are perfect. A 2-10g model may be ideal for snaggy rivers, larger lures and big trout. 6-7ft long is ideal and a softer action is preferable. Trout have very bony mouths and love to jump, a softer action will help retain hook holds. Spinning set-ups, using fixed spool reels are perfect for all scenarios. Many enthusiasts enjoy fishing with finesse bait casting set-ups. They can be heaps of fun to fish with. Often they’re paired with even shorter rods in the 4-5ft range. The drawback, a good quality set-up is considerably more expensive than its fixed spool counterpart. Line choice really depends on the venue, lure weight, and size of fish. Some anglers fish incredibly light. But for most situations 6lb mono or fluorocarbon will work a treat. Braided mainline in similar strengths works perfectly, when paired with a fluorocarbon hook length.

Many styles of lure can be used for trout. Spinners, micro spoons and crankbaits. These can really provoke reaction bites with lots of flash and vibration. Modern soft plastics can imitate almost any kind of moving prey. Working lures upstream and flashing them through the current proved extremely effective, while downstream fishing performed well in slower areas. You can really vary the retrieves – a faster steady retrieve will work sometimes, while on other occasions simply bouncing the bottom is more than enough. Trout have amazing eyesight and can easily pick out prey. However, trout are delicate, and for best catch and release it’s important to consider swapping out treble hooks for small singles. Keep handling time to a minimum, and where possible handle them in the water, or with wet hands, as their protective slime coat is extremely delicate. 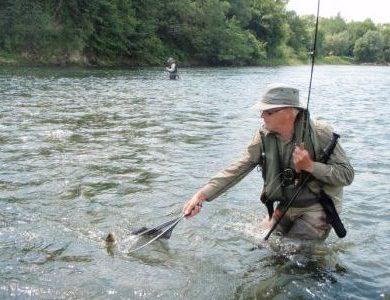