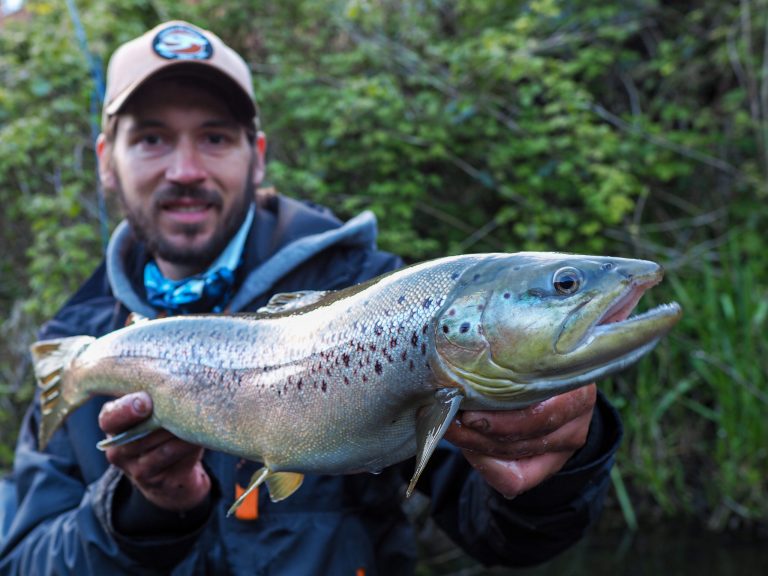 Blame it on the weather

Last week we were bombarded with high wind, snow, rain, and everything in between, laying waste to my bass fishing plans.

At last, with the weekend approaching, the weather began to stabilize, so I decided to head to the coast. Knowing my main coastal marks would be carrying the colour of stirred-up sand and chalk, I decided to head to an early season banker spot, to focus on an estuary, targeting numbers of smaller 30 – 50cms bass. Hopefully, it would kick-start the season, boost my confidence, and put some cool new lures to the test. I expected slower-than-usual fishing, with temperatures still low and an afternoon tide, but I would be happy to get the ball rolling. Stood on the edge of a fierce tidal rip, I cast my lures through a strong headwind. My session was short, focusing on the final stage of the flood tide, when flows ease and the water clarity improves. I continued to blast soft plastics into the wind for an hour or so without a bite. Suddenly, I struck into my first fish of the day. A feisty scrapper on light tackle but no monster, at around 34cms I quickly slipped it back. Where there’s one there’s often more. I continued to cast, searching the water, now hopeful of another rod-wrenching take. After another 40 minutes of casting, I hadn’t had a bite and packed up. I left somewhat defeated, but was happy to be off the mark for 2021, a sign things will pick up soon. The following day it chucked it down – rain, sleet and hail in biblical amounts. I planned to re-visit the estuary for a dawn session the following day. I followed through with my plan and returned, as expected it was uneventful. I packed up and decided to focus on trout to salvage the day.

I recently joined the UK Lure Series as a fun way to have some friendly competition with other lure anglers around the UK. There are two divisions, a monthly and yearly league. The monthly taking place like a giant match across the UK on select days. To suit my time off, I chose to join the yearly league. You submit your best captures across Pike, Perch, Zander, Chub & Trout, and the winner takes a £1000 pot. It seems like a good laugh with some great guys to fish against. They allow fly fishing captures too, so I decided to spend some time putting a solid trout on board. Maybe I could redeem my poor morning’s bass fishing by upgrading my trout.

I arrived at the river with an amazing sight, despite the coloured floodwater there were rising trout. Hatches this year have been incredibly poor, but for the first time this season there were consistent risers. They were working the tree lines and banks. I had to find out what they were feeding on and get in on the action. I sat at the water’s edge, pond-dipping, scooping up any passing nymphs and insects I could find. The strong gusts of wind blowing across from the woodland had carried a buffet of beetles and bees, but most of all Hawthorn flies. There were hundreds. Small males and big juicy females, perfect trout snacks. A few days prior my friend Scott & I had been going shot for shot, and I’d managed a nice one on one of his home-tied Hawthorns. Still in the box, I tied it on and covered a rising fish. The line dragged and the fish rejected, spooking upstream. I sat back for 10 minutes, picking out another riser. This time the drift was perfect and the fish slurped it down. I set the hook into a quality brown, which shot towards me before tearing off downstream in the strong floodwater. I kept the pressure on and eventually netted a lovely brown trout. Not quite big enough for an upgrade, however I was thrilled to tempt one with a dry fly.

The weather turned again and stopped the rise in an instant. I decided to take a break and grab the streamers. An aggressive approach may pick out a much larger fish. It was slow work with poor water clarity, eventually I noticed a spot that had to be holding a trout. Brambles and overhanging branches provided perfect cover. I did a low cast, placing the fly below the branches. After a few strips of the line connected to a heavy fish. The fight stayed close quarters as the fish fought tirelessly to snag me in the edges. The hook held, I netted a fantastic trout. Unusual in appearance, very silver, perhaps due to the coloured water. A quick measure and picture then I slipped her back. A 1cm upgrade for the lure series, I’m certain I’ll need to catch one much bigger.

Spotting my first mayfly of the season while packing up, I think there’s definitely a chance of a monster or two.