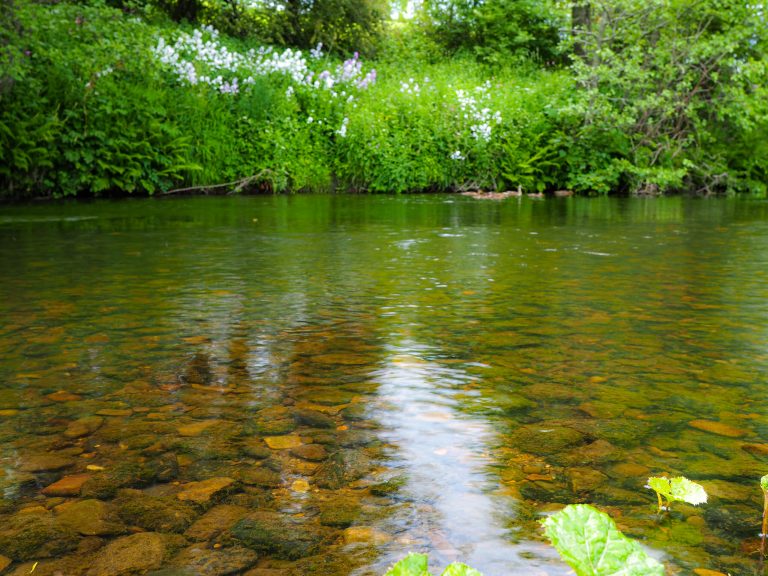 A beautiful scene on the Derwent
Robbie Northman

A Day on the Derwent

I found myself heading to the Midlands for a day’s work. Travelling to that region, it seemed like a perfect opportunity to fish, so I got in touch with my good mate Andy Buckley, a Derbyshire fly fishing guide, to see if he fancied a day’s fly fishing. Andy was fully booked, guiding for the week, but he managed to help me with a pass on the beautiful River Derwent. A river I had never fished for trout before.

I arrived at the river around 1pm, blue skies and a slight breeze made me eager to fish. The Derwent is a beautiful river, fast-flowing, stone-bottomed, with deep pools and steep banks hosting mature trees. There’s a very diverse range of habitat to target, so the first course of action was to take a long walk.

Not far from the car I spotted my first trout of the day, sheltering behind a rock under tree canopy. I decided to cover him with a small olive emerger, although this fish wasn’t rising. A few casts later, I was in. A great scrap followed, as the fish took off downstream. Unfortunately, unprepared, he slipped the hook. I carried on walking the stretch, passing beautiful pools and riffles. In the bright sunlight I hadn’t seen a fish rise, but gained an idea of the areas to target. I began my walk back up the stretch, keeping an eye on the water, suddenly, I spotted a quality wild brown sat in no more than 8 inches of glossy water. I watched as he occasionally moved for a nymph. I had to catch him!

Rather irritatingly, his line of sight blocked my entry into the river, I decided to stay low on the ground and cast from high on the bank. I tied on a size 14 jig nymph with a New Zealand indicator for reference, and made my cast. I overcast to compensate for height, and luckily got it right first time. I watched the indicator land and guessed the nymph was probably about 18 inches behind it, deflecting off the stone and gravel. The rig passed the fish perfectly. I watched as he flashed his flank and mouthed at what I assumed was my fly. I struck and chaos ensued, the trout bolted off across the shallow, almost reaching the backing. I sprang into action, sliding down the steep bank to the water below, quickly realizing I hadn’t changed into waders. Now I had to land this one!

I increased the power, trying to steer the fish away from the rapids below, succeeded, and the fish took off upstream. The battle was almost won, and after a few more runs the fish hit the net. A magnificent Derwent wild brown. A fine example of the beautiful trout the river holds. I slipped the fish back in awe, my first trout of the day would be a difficult one to top.

A little cloud cover moved over through the afternoon. The odd fish began to rise, I switched over to the tiny 7ft #2wt and decided to have some fun, tempting some beautiful wild browns on a mixture of flies from tiny size 20 tricos to size 16 emergers. It was challenging, engaging fishing, and the hours soon passed by. Time to have a break and change spots for the evening rise.

I arrived at the new location a few hours prior to dusk. The spot was beautiful, and while there weren’t many rises, I did spot a few very tight under the overhanging trees. I crept into position and worked a few casts under the trees, picking up a nice wild brown on a small olive dun. I continued to cover the banks, and soon hooked into something much bigger. My tiny #2wt combo buckled over as the fish charged upstream, putting me on to backing. It went for every snag on the river, somehow I managed to keep it free, eventually steering the fish closer before taking a chance with the net.

I landed a cracking rainbow trout, more than likely a stocked fish from another section, but a great fish all the same. The Derwent does throw up the occasional wild rainbow, with the river Wye flowing into it the occasional juvenile washes down.

As the light began to fade the river came alive with rising fish. There were more species of fly than I could count. Mayfly, Yellow Mays, caddis, and many varieties of olive I couldn’t see up close. Finding the right fly proved challenging, and each fish required the right choice to confidently rise. Over the next hour I managed several wild browns, and missing takes from many more. I picked one final riser to target and in the low light decided on a Mayfly spinner pattern. The choice worked and I hooked a fish. An acrobatic fight followed and the fish launched 3-4ft in the air several times. Incredible power from a trout of about 10 inches. Finally I slipped the net under my final catch of the day. A beautiful little wild rainbow trout. A great way to end my session on an amazing river.

If you enjoy your fly fishing I would highly recommend booking a day on the Derwent. I fished the Peacock at Rowsley beat, which offers both day ticked and guided days.

Start typing to see results or hit ESC to close
salmon fly fishing chub roach pike
See all results
More Stories
A chance to bid for two day’s fly fishing with rugby legend Gareth Edwards!
This website uses cookies to improve your experience. We'll assume you're ok with this, but you can opt-out if you wish.Accept Reject Read More
Cookies Policy