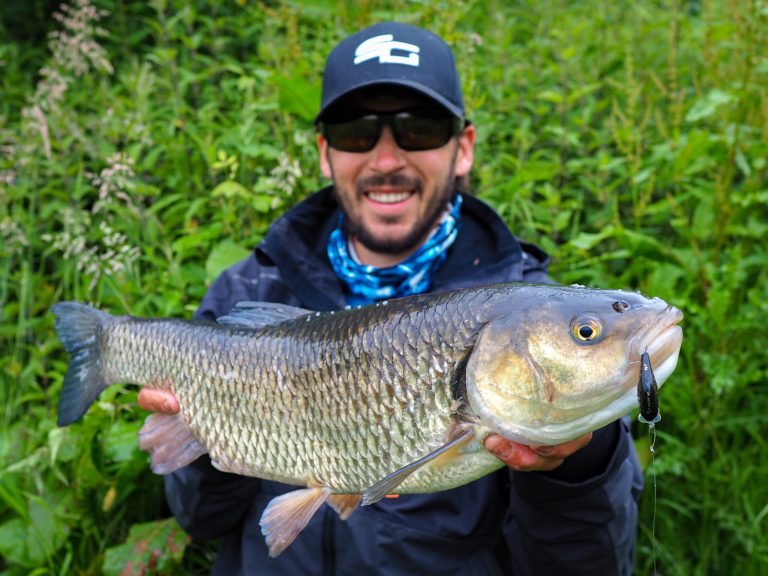 Chub: Trying to Track a Giant

With the season well and truly under way, and the chub fishing steady, I decided to turn my attention to specimen fish.

Up until a few years ago the chub fishing on my local rivers was truly amazing, with a number of 6lb+ fish to target. Unfortunately, our small Anglian rivers have been in decline. Over-abstraction, silting, predation and pollution are among many issues, and the majority of these large fish have reached the end of their cycle. Fortunately, there are some young healthy fish to take their place, but with the rivers having shrunk considerably in the last decade, will it ever be as prolific?

Among my action-packed sessions, stalking chub on the fly and lure, I’ve been back and forth visiting a difficult section. Barren, silty and lacking in features, fish are few and far between. In this harsh environment only the strongest survive, and occasionally a specimen fish appears. Morning, evening, afternoon, when on route to other venues, I’ve taken the time to have a quick forty minute walk of the small stretch, armed with my lure rod in case I see signs of a fish.

A few weeks into the season I finally spotted a fish. Patrolling the overgrown banks slow and cautiously one afternoon, I spotted a ghostly, grey back, glowing against the dark shadow cast by tall reeds. Over 2ft long and thick on the back, I knew this was great fish between 6 and 7lb. Instantly crouching down, contemplating the best approach as I rummaged through the lure bag. Instinct told me to remove the surface lure and go for a small crankbait. The fish was alone and I foresaw a spooky rejected take. The crankbait being almost neutrally buoyant would hopefully allow the chance of a hook hold.

I rose to my feet and plotted the cast. Aiming to play it safe, casting upstream, and drifting it in to line before my retrieve. Plop! The fish hadn’t noticed and I waited for a moment for the lure to line up. I began my retrieve and the big chub instantly gave chase. I lost sight of the action behind the tall reeds but continued to wind. Suddenly! The rod hunched over, drag clicked and excitement kicked in. No… Everything went slack! The fish shook the hook, leaving me standing in silence. That was the only fish I would sight on that walk.

I moved venue to a slightly easier section of river with a smaller stamp of fish. Changing back to a topwater lure, I covered the shadows and undercuts of mature trees. While retrieving the lure the surface erupted! I hooked up to a strong fish. Initially believing it was a pike due to the aggression and fast run, I was mistaken. A long torpedo-shaped chub emerged, thrashing at the surface. I quickly netted my prize, an awesome streamlined fish at 56cm, comfortably in the 4s. My mind was at rest, and I could set off home later that evening somewhat redeemed.

Time passed, and I continued to drop by the section, not once catching sight of a chub. I placed casts in a few strategic areas, managing the odd small perch and dace. No sign of chub, but it was just a matter of time. I knew the area it would likely show, I just needed another shot. A burst of rainfall and a gloomy day, I returned to the section assuming there had been little activity on the water. The fish may be confident enough to show. The cooler conditions enticed small groups of dace to cruise the surface, hopefully the chub would have a similar mind-set. I walked through the stretch to the section I’d spotted the fish first, scanning meticulously through my glasses for a glimpse of grey. With nothing in sight, I decided to stop, wait and watch. Perhaps this was just a resting point for a lone nomadic chub.

Half an hour passed and I finally spotted the fish, accompanied by a smaller chub around 4lb which it dwarfed. Hidden by the reeds, I watched in awe as they circled around, settling alongside the reeds where I had hooked the fish previously. I took a few breaths, composed myself, and made a cast. The smaller chub followed and I quickly retrieved my lure, knowing my chance would be blown if I hooked that fish. Before it could regroup, I cast again, the plop grabbing the attention of the big one. I slowed the retrieve twitching the crankbait along the surface as the fish followed it downstream. The tension grew and as the chub approached, I increased the speed, imparting more action. The flight or fight instinct kicked in, and the chub lunged at the lure, engulfing it.

Heart in my mouth as I paused, waiting for the fish to turn and hook up. Splash! The fish bolted, driving the hook home. The 3-10g rod was doubled over with screaming drag as I fought to keep the fish free from snags. A minute felt like eternity as I focused on controlling the runs and lifting the heavyweight from weeds. A flash of broad flank emerged at my feet and I quickly scooped with the net, landing a fish of great proportions, 60cms in length with a tremendously broad back. In prime conditions a behemoth, but totally empty at 6lb 4oz. I was elated, ecstatic, heart pumping after landing my biggest chub of the season. I slipped the fish back, rewarded after such a great search. The target to top is my PB 7lb 10oz, I may never beat it, but I’ll keep trying to track that giant. 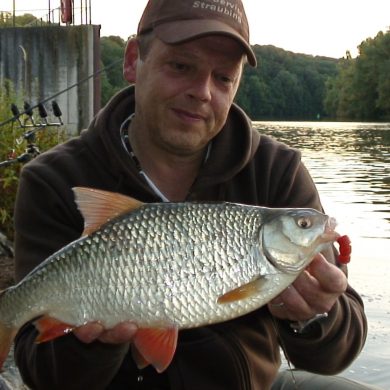